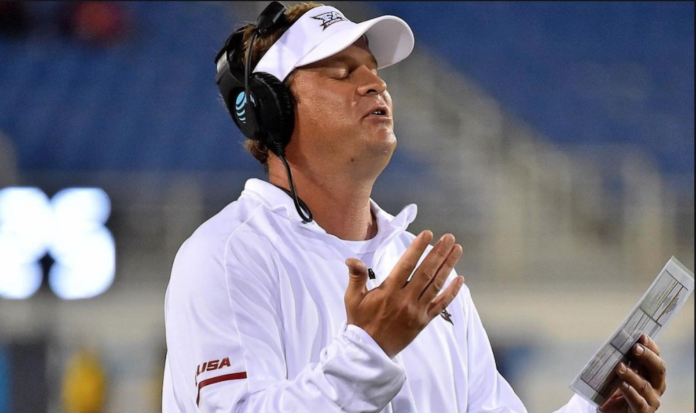 Earlier this week, just about the whole Razorback Nation believed the coaching search was over and that all arrows pointed towards Lane Kiffin as the winner.  Readers of my columns know I’m not a big fan. I was relieved that the echo chamber of talk radio and social media yodeled loud enough that most of the Razorback Nation was simply duped into believing he would be the next Hogs coach.

SHOULD I HATE HIM?

I don’t hate anybody, but, since the search continues, here are my top 5 reasons to pass (pardon the pun) on Lane Kiffin:

ONE:  THE DEVIL YOU KNOW

Coaches have to REALLY screw up to be fired midway through the season.

Because ADs are rarely willing to pull the plug on a sitting coach, if for no other reason the cure might be worse than the poison.

Interim coaches will most likely come from within.  This means there’s a high probability he won’t have head coaching experience.  Sometimes it’s better to stick with the devil you know than the devil you don’t.

All of this makes it remarkable that our boy Lane, having been a head coach for only four teams, has managed to get fired twice in mid-season.

—USC:  Fired in his fourth season after taking a 62-41 shellacking at the hands of Arizona State.

Considering the state of the program, it’ll be hard to find anyone who won’t try to use the Head Hog job as a springboard to go on to bigger and better things.

Kiffin has already shown his snake-like loyalty when he bolted from Tennessee after one year to go back to the West Coast and coach USC. We know the rest of that story.

—Upside?  With his track record, for anyone to take a chance on him he’ll have to perform while he’s here. If that happens, it means we’ll have some good seasons.

THREE:  DOESN’T PLAY WELL WITH OTHERS

Related to the mid-season firing at USC.  When he was fired he was above .500. Yes, he was fired after the aforementioned 62-41 beat down, but to me, it had to be in the cards and I wouldn’t be surprised if there was more to it than just wins and losses. You just don’t fire someone in mid-season who still has a winning record unless there are other factors involved.

I get the feeling that he sees himself as the “smartest guy in the room” even if Nick Saban’s in that room. Hubris is probably the root of the USC firing. He hasn’t earned the right to be cocky.  Sure, at 31, he was the youngest coach in the NFL. But 5-15 is nothing to brag about.

I don’t think Hunter Yurachek will put up with that, especially if he’s not winning.  That leads to the high possibility of internal tension in the program, a recipe for disaster.

I understand that Florida Atlantic has a number of legit Power 5 players, and I assume he recruited most of them. However, when you see a program like his at USC decline like it did — and the majority of the players by the time he left were his recruits — you have to wonder about his talent evaluating skills.

His early success (10-2 in his second season) at USC was largely fueled by players he did not recruit.  The 62-41 loss to Arizona State happened with his players. When the team plane got back to Los Angeles at 3:00 a.m., he was called off of it and handed his walking papers. Fired on the tarmac.  I think you get my drift……

Hunter Yurachek will be taking a risk if he hires Kiffin.  We’re currently paying for the buyouts of two former Hog coaches.  We don’t want to be paying for a third one while we’re still paying the first one, but it could happen.

If it does, I suspect Yurachek will be walking out the door of the North End Zone complex right along with Kiffin.

On the potentially positive side, maybe Lane Kiffin has grown up some.  He’s been successful at Florida Atlantic. They’ve scored in the 40s in 7 of 12 games this year and one of their 3 losses was to Ohio State.  As I’ve said, few will doubt his football mind, especially on offense. Maybe he learned a thing or two working for Saban.

I’m first and foremost a Hog fan. If Lane Kiffin’s hired, I’m going to give him the benefit of the doubt and support him—until he gives me a reason not to.