Nowadays, black quarterbacks are commonplace on the NFL landscape. It appears no native African-American Arkansan has yet suited up for an NFL team as a quarterback, but all the same the state does have some tangential connections. Former Razorback Tarvaris Jackson, an Alabama native, played a decade in the NFL and got a Super Bowl ring in 2014 with the Seattle Seahawks.

Less well known is that Stuttgart native Eddie Boone nearly tried out to be a black NFL quarterback pioneer in the early 1960s. At Philander Smith College in Little Rock, Boone had been the teammate of future NFL star Elijah Pitts and after graduation drew interest from the Los Angeles Rams for a tryout, he told me. At this point, though, black quarterbacks were an extreme rarity. Those who did get into the league, such as Willie Thrower and Charlie “Choo Choo” Brackins, barely got any playing time at the position at all. Most prospects (e.g. Sandy Stephens) were moved to other positions, and that’s what the Rams wanted to do with Boone.

Instead of switching positions and living far from home, Boone decided to stay home, get married and begin a highly successful high school coaching career. Indeed, while working in Menifee in the mid 1960s, he coached the first scholarship black Razorback and became the first black coach to compete against all-white AAA teams. Read more about his fascinating story in my new book “African-American Athletes in Arkansas: Muhammad Ali’s Tour, Black Razorbacks and other Forgotten Stories.” 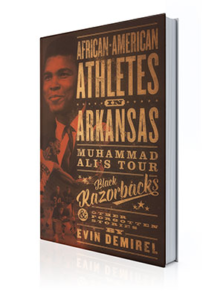 Around the same time as Boone’s almost-professional foray, Chicago Bears coach/owner George Halas discussed the state of the black quarterback with the Muhammad Speaks newspaper. Click here for the first part of his 1963 interview. Below is the second part:

Asked if he would like to become the Branch Rickey of football, Halas answered, ‘I already am. Remember Willie Thrower* about eight years ago?’ We tried him out at quarterback but he didn’t have the arm.”

The Bear mentor said there is “quite a scramble going on now among professional teams to get players from Negro colleges. You can understand my interest,” Halas explained, “when you consider such men as Willie Galimore and Herman Lee, who came to us from Florida A&M University (Tallahassee).

“Jake Gather, coach of the Florida A&M Rattlers, is one of the best football minds in the country. He sent us four players from his squad and we now have signed him as a scout.”

Halas went to his files and showed a Muhammad Speaks reporter some of the scouting reports he has on players at Negro colleges. He said he had high hopes for one player, whose name he did not want to disclose at this time. The veteran coach thinks he helped the team in the latest football draft and said, “Our chances of winning the championship (1963) are fairly good.**”

*Willie Thrower played the Chicago Bears in 1953. “He was “the first black NFL quarterback of the modern mold,” according to former Deadspin writer Greg Howard. “He led his Michigan State team to a national championship in 1952, his senior season. Thrower went undrafted but was signed by the Chicago Bears, serving as George Blanda’s backup for his one year in the league. His only stats came in relief duty on Oct. 18, 1953, when the coach benched the struggling Blanda for a bit. Baby steps.”

**Well played, Georgy boy. Halas called it: the 1963 Bears would indeed win the NFL championship after an 11-1 season. Don’t expect such glory to be reclaimed in 2017. Most insiders have the Bears finishing with a losing record that begins early on: the Bears are a 6.5 underdog to Atlanta in Week 1 according to football lines in major sportsbooks.