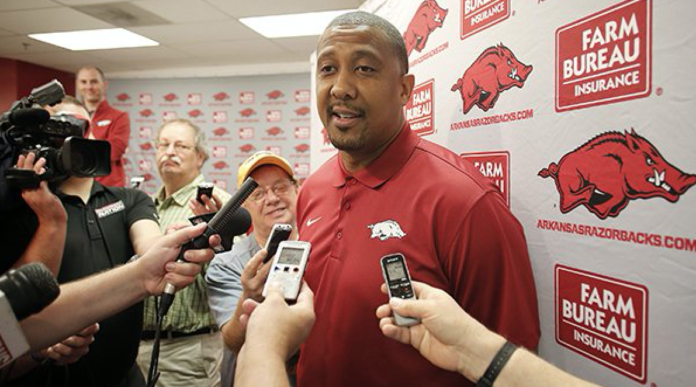 The new Razorback assistant and top-rated recruit share their thoughts on the 2016-17 season.

I recently had a good talk with Hog signee Jaylen Barford, the nation’s No. 1 JUCO player, on behalf of OnlyInArk.com. Barford’s heading to Fayetteville in late May. For those of you salivating for some Hog factoids, here are a few little nibbles:

The next day, I asked new Razorback assistant coach Scotty Thurman how he would take advantage of time to be able to work directly with rising senior Razorback Dusty Hannahs. Hannahs has already established himself in the pantheon of great Hog three-point shooters alongside the likes of Pat Bradley, Rotnei Clarke, Alex Dillard and Scotty Thurman himself. Does Thurman have any ideas to take Hannahs’ shooting to even another level?
“Definitely, I have some ideas,” Thurman said. “I’m not at liberty to say those today. I definitely have some ideas and things that I think I can maybe share with him that will allow him to be even more effective, more efficient. He’s a great shooter already, but there’s always some old tricks that we have that maybe he can be able to utilize.”

And just like that, Thurman had smoothly pivoted around the question while still technically answering it.  Not bad media navigation for a rookie coach!

Below are some more excerpts from Thurman’s insight via a recent press conference:
Q:    What’s your reaction to being named assistant coach?
Scotty:    I’m very excited about the opportunity. Obviously, I know that it’s a huge task. It’s my first time doing it, but I’m very, very excited about it.
Q:    You’ve been a month now or so, just recruiting. What’s it been like out there on the road?
Scotty:    It’s been pretty good. I had an opportunity to connect with some people that are in the business, and I had an opportunity to compete against every player, and obviously, had the chance to get to know some of them as well in the business. I’m real excited about continuing trying to establish relationships both on a high school level, AAU level, as well as collegiate level…
Q:    You’ve obviously been here, been involved with the program, but this is a new role for you. Do you have any qualms or nervousness about doing this for the first time at a really high level?
Scotty:    I don’t really get nervous too often. Obviously, having played here, having an opportunity to work here, and be able to set the foundation of what we’re trying to do, I wouldn’t say I’m having qualms. Obviously, there’s always going to be some nerves. Every time I’ve ever played in a big game or had to go and speak in front of a group, there’s always been butterflies. Once those go away, there’s still a job that has to be done, and I’m prepared to do the job.
Q:    What makes you feel that you’re ready for this?
Scotty:    Well, I’ve done it. Aside from having the opportunity to do on the floor here, I’ve had the opportunity to recruit some athletes to this campus when they arrive here. I had an opportunity to go out with coach when he first came in, to go out and identify those guys who were in transition on whether or not they were going to stay with the coaching change and all. I had an opportunity to do it there, so I do have experiences outside of what popular belief is.

Q:    Most of the kids that you’re recruiting weren’t born when you hit the big shot playing here. Do you find that gives you street credit?
Scotty:    With their parents, it definitely does. I had the opportunity to connect with some kids that way. Obviously, they want to talk about the days of Coach Richardson, now of Coach Anderson. That’s a talking point. Obviously, you still got to go out and do the work, and do homework, and the background checks, and everything they require to bring in the type of talent student athletes you want to have here.
Q:    How much of the last seven years under Coach Pelphrey and Anderson kind of groomed you for this time?
Scotty:    I like to think a lot. Obviously, coming into this business from high school and middle school, you really get to know what to expect behind the scene, but there’s a lot of work that goes into this besides just what the people see on the floor. I had the opportunity to be involved in every facet based to coaching. I’m looking forward to being able to take those skills and experiences and utilize them out on the floor.
Q:    How much more time will you be on the road now that you’re an assistant as opposed to what you’ve been doing? Was that a concern with your family and just time with your children when you were discussing it with your wife?
Scotty:    A lot more. It’s funny you mention that. I had the opportunity to go overseas as many years as I did. On a road, for some people it may be different. For me, on the road means being in a foreign country for eight months. That’s on the road. Being gone for a weekend, being gone for a few weeks, it’s travelling, but I don’t really consider it on the road. I’ve played 11 years overseas in countries like Greece, Yugoslavia, third world countries often, Lebanon. I’m on Jordan. That’s on the road.
Q:    Scotty, you’ve watched a lot of practice, and I’m sure you’ve offered input in meetings and things, but being able to do hands on stuff at practice, now what’s the going feel like?
Scotty Thurman:    It’s gonna be exciting. Been having the opportunity to sit there for the last three years, whether it was at the color analyst at the table, or being the directs of that development has been somewhat challenging. When you’re a ball player, you feel like you bring some skills to the table, but obviously, you gotta pay your dues, and I paid those dues. I just thank coach for giving me this opportunity, having the confidence in me to get the job done. I really feel very good about it.
Q:    I know you wanted to coach for a while. Did you have other opportunities? Did you think about going to school A, B, or C just to break into coaching?
Scotty Thurman:     Well, I’ve had several opportunities be it in high school level, the collegiate level, but I’m wired a little different than most guys. My loyalty’s here. I’m a Razorback. I’ll forever always be. There’s a reason I’ve never left the state. Don’t have any intentions to. This is university that groomed me into being not only a young man, but a productive assistant. It’s something I want to help other student athletes have the opportunity to experience.
Q:    Was there a part of you that just said, “Okay, if I’m patient, I’ll get what I want?”

Scotty:    Oh, well I’m always about patience. My family and I have always taken the opportunity that we have, and we talk about those as a family. My kids and my wife are very, very excited about this opportunity knowing that it’s going to provide different challenges as a family. This is a new beginning for me because my son is graduating college. I’ve just got one more kid that I’ve gotta try to fight this roller coaster with, but we’re very very excited about it — she’s excited about it, I’m excited about it, and my wife is also excited about it…
Q:   Mike was just in here saying he knows last year, even though it seemed they overcame a lot of obstacles to do okay, last year obviously wasn’t the kind of year you guys want. Do you feel that the program is in a good position to bounce back?
Scotty:    No question about it. You don’t go 27-8 by chance. Obviously, we went 16-16 with the absences of some guys, some guys going to the pros, some guys for other reasons. I really, really feel like the program is heading back that way. You look at the teams across the college, last game they had played very, very well. It’s always those guys that have experience, and we got them coming back on our side.