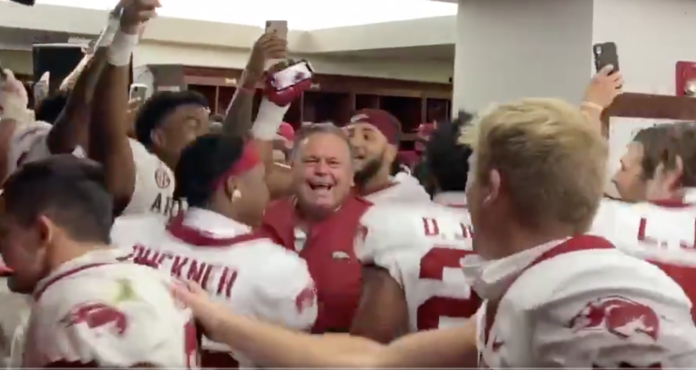 There are all kinds of numbers and stats that make Arkansas’ Saturday night upset at No. 16 Mississippi State significant. The 21-14 victory was the the program’s first road win over a ranked SEC team since 2015, first win against a ranked team since 2016 and, of course, the first against any SEC team since 2017.

Sam Pittman’s first win as a Razorback head coach also snapped each one of these streaks:

Yet, right after emerging from a jubilant locker room, Sam Pittman hardly named a single stat. As the chants of Razorback fans still echoed off the bleachers of a nearly emptied Davis Wade Stadium in Starkville, Miss., Pittman couldn’t place his finger on the exact number of SEC match ups the Hogs had lost coming into the game.

He knew none of that was the big story.

What mattered the most to Pittman was that he had proven himself a man of his word. When he came to Arkansas in December on the heels of the worst era in school history, his No. 1 job was to make sure his guys played consistently with heart and pride again. From that, everything else — fan support, national respect, a return to bowl games, Top 20 recruiting classes — would flow.

“I’m just really happy. I’m happy for the Razorback Nation,” Pittman told Chuck Barrett, broadcaster for the Razorback Sports Network, after the win. “We should always try to make them proud. We want to give them something they can be proud of. And I promise you be proud of our football team. They play really hard.”

Indeed, for the first time in too long a time, the Hogs played hard enough — and well enough — for a full four quarters to do what they couldn’t do in the Chad Morris era: finish.

He was quick to give the lion’s share of credit to defensive coordinator Barry Odom and the Razorback defense, which made three interceptions and two fourth down stops in crunch time.

“It was a great game plan by Coach Odom,” Pittman said. The Hogs just “needed to execute the game plan. We talked about, ‘Hey, you just need to do your job.’ And obviously we try to put the kids in position to make plays, but man, did they make a lot of plays. And [the Bulldogs] obviously ran the ball a little bit more today than what we thought they might. But the big reason was because we had five in a box the whole game and carried 15 DBs.”

The defense’s first huge play, which turned out to be the difference in the game, came early on. Just 3:14 into the first quarter, Arkansas defensive back Greg Brooks Jr. (who in Dec. 2018 had flipped from MSU to Arkansas) came up behind the receiver and intercepted a bad throw by the Bulldogs’ QB K.J. Costello.

Brooks then sprinted up the field for a 69-yard touchdown return to put the Razorbacks ahead 7-0.

“I don’t know how far it was,” Pittman told Barrett. “Maybe 75, 80 yards. He went right up the sideline and guys turned around and became offensive players and blockers for him, and such a big play early, and maybe it rattled the quarterback Costello. I don’t know if it did or not, but it certainly gave us seven quick ones. And that was a big lift that we needed early.”

Here are other excerpts from Sam Pittman’s first interview after the historic Arkansas win:

More on the huge fourth down stops:

“I’m so proud of the guys I was able to hire, and the kids that I inherited. I told them on the plane, ‘This is all we need. What’s going on that plane is all we need.’ We had some injuries, but they fought through it. And we played a lot of kids, I’m really proud of them.”

See one of the critical stops here:

On the team suffering a rash of injuries before and during the game Julian Coates or Dorian Gerald for the whole game):

“We just say, “Hey, we got enough on the plane. Somebody goes down, somebody goes in, let’s go win the football game.” Nobody put their head down. It was, it was business as usual. Obviously, we hope we get those players back.” [Pittman later said that he didn’t expect any of the injuries to be season-ending]

“He was a tough quarterback. I’m very proud for him and all the other guys — the grad transfers that came in to win the game and get us off that whatever length [losing streak] it was , and to believe in us and come in here and help us. And, and I was really proud of him tonight.”

On what it all means to him:

“I’m really happy. Mostly I’m happy for the Arkansas, and I’m happy for the players and the coaches. I was brought here to help turn the university, the football team around, and I can’t do it by myself, but Hunter Yurachek gave me a game ball in there and I sure do appreciate it. I’m going to have it behind my desk here shortly.”

Sam Pittman’s the real deal. He’s shown that by how his coaches and players have come together here at the start of the season, and shows it again in this clip:

In the locker room, Pittman also asked to “turn the damn jukebox on” and got down with the team as hip hop blared. Echoes of Chad Morris’ infamous “Club Dub”?

Here’s what Pool had to say about that: