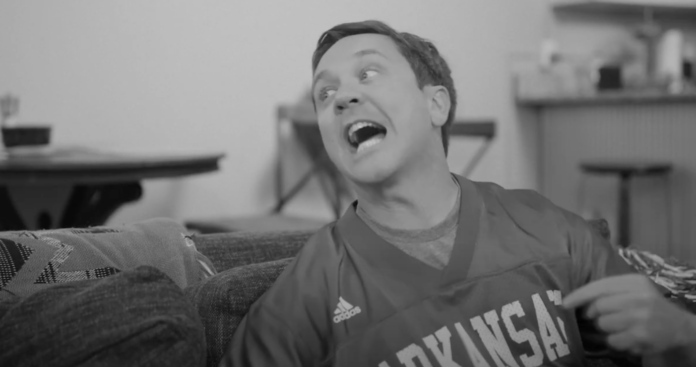 For the first time in the longest time it’s high times in Hog land.

The accolades keep pouring in after Arkansas’ 21-14 triumph at No. 16 Mississippi State. The SEC just announced two Arkansas teammates, linebacker Bumper Pool and defensive back Joe Foucha, are co-SEC defensive players of the week. Plus, in most media members’ newly released SEC power rankings, the Razorbacks are actually in the conference’s top half — unthinkable during their 20-game losing streak in the SEC.

ESPN’s Kirk Herbstreit is getting in on the act, too:

In Week 3, Arkansas’ defense leads the SEC in interceptions (4) and turnovers gained (6), ranks second in red zone defense, court in third down defense and fifth in scoring defense (25.5 ppg) and rushing defense (104 ypg). Everybody and their mother, it seems, now loves Razorback defensive coordinator Barry Odom, who put on an absolute clinic in slowing down Mike Leach’s famed Air Raid attack.

How popular is Odom nowadays?

On Reddit’s Razorback page, nothing more than a picture of his proud Teutonic head was posted. It got 564 likes.

The “Is it baseball season yet?” by the poster’s name is appropriate. That’s how most Hog fans have felt through much of the last three seasons. So much so, in fact, that many fans felt like giving up on the program altogether (OK, so many did give up on the team when Chad Morris was head coach).

That sense of fatalistic exasperation comes to the fore in a hilarious new video spoof of “It’s a Wonderful Life” by SEC Shorts. The clip starts with Gee-Willikers-talking Hogs fan in the place of actor Jimmy Stewart’s iconic George Bailey character in the 1946 classic.

In “It’s a Wonderful Life,” a broken-down Bailey wishes he’d never been born, only to be awakened to the fact that his life actually does mean something by the intervention of his guardian angel.

In the SEC Shorts version, the Hogs fan is breaking down at the end of the season-opening Georgia loss, so angry with the way Arkansas folded late in the game that he wished Arkansas football never existed.

Sure enough, a Colonel Sandersian guardian angel named Clarence pops up to grant him the wish.

So proceeds a hilarious series of events that delve into the nauseating possibilities of a world without Hogs football — English Premier League soccer infatuation, Ole Miss winning the 2015 SEC championship and Darren McFadden bringing “dat wood” for LSU instead of Arkansas.

Arkansas’ thrilling upset of MSU on Saturday was drastically different to the 2019 contest between the two teams. Especially on defense.

“We’re a completely different team,” Bumper Pool said post-game. “We’ve got really the same guys but the mentality, the type of work we put in throughout the week. I mean we’re grinding throughout the week to get these wins. And the fact that it all paid off today… I’m so excited.”

In 2019 the Bulldogs scored 54 points against the Hogs’ defense in a 30-point route. That’s a 40-point difference in one year.

Mississippi State was coming off of a shootout win at LSU, 44-34. Their quarterback KJ Costello set the SEC-record for passing yards with 623 in that game to go with 5 touchdowns.

Arkansas was coming off of a tough 37-10 loss to Georgia. Arkansas led that game 7-5 at halftime before the defense collapsed.

Last year the Bulldogs were coming off of a 30-49 loss to Texas A&M and Arkansas was coming off back-to-back embarrassing performances to Auburn, 51-10, and Alabama, 48-7.

In 2019, they ran for 460 yards in Fayetteville. Kylin Hill ran for 234 yards and 3 touchdowns. The backup running back Nick Gibson also ran for 129 yards and a touchdown. The quarterback Tommy Stevens ran for 74 yards.

Hill had a 62-yard and 58-yard run in the first half and Gibson ran for a 47-yard touchdown in the 4th quarter.

But this season was a different story. MSU’s longest rushing play was 10 yards. There was only one offensive play for Mississippi State that went longer than 20 yards.

Hill did get hurt early in the game and that may have been the difference, but Rakeem Boyd for Arkansas also got hurt in the game.

This year Mississippi State threw the ball 60 times for 313 yards, compared to 19 passes for 180 yards last year, and they only ran the ball for 87 yards.

With the air raid attack came with 3 interceptions by KJ Costello including a pick-six on the first Bulldog possession.

The Arkansas football team did a great job of covering the deep ball and forcing the ball under. Mississippi was not able to get the big chunk plays Arkansas allowed in 2019.

In the second half, Miss St scored on their first possession, but Arkansas kept them from scoring the rest of the game.

Official behind-the-scenes highlights video from the U of A

After the touchdown the Bulldogs had 5 more chances to score. The second drive ended with Joe Foucha getting his second, and the Hogs’ third, interception of the game. The next drive ended in a three-and-out. The next two possessions both ended in turnover-on-downs. There was one 1st down between the two drives and Arkansas made stops in the 4th quarter on 4th and 2 to end both drives. The final drive of the game resulted in Mississippi State running out of time.

The Hogs came up big when it mattered most. They kept Mississippi State from driving down the field in the 4th quarter. When they faced a 4th down on defense, they made a stand both times and kept Miss St from tying the game.

This game shows the drastic improvement this defense has made in a year. This team torched them on the ground for 460 yards and 640 total yards on offense a year ago and put 54 points on the board. This year they allowed just 400 total yards and only 14 points.

Barry Odom has made an instant impact on the Razorback defense.They had the worst defense in the SEC last season, but they may have one of the better defenses this year.

After the game Bumper Pool praised coach Odom saying it was the most prepared he’s ever been for a game and that the game plan was perfect.

What this game also shows is that Arkansas football appears to have hired the right guy for the job. Pittman defeated Leach who was also a candidate to be the Had Hog in their first matchup. Pittman along with his staff out-coached Leach and won the game.

Jalen Catalon had 13 total tackles. He leads the team with 16 solo tackles in the early season, and he is top-5 in the SEC with 22 total tackles.

Joe Foucha had two interceptions. Greg Brooks Jr. had the pick-six early in the game. Eric Gregory collected the only sack of the night and Deon Edwards recovered a muffed punt.

So far this year the defense has kept No. 4 Georgia out of the endzone for an entire half and took the lead into halftime week 1, then they kept a team that scored 50+ on them 2 years in a row to 14 points, and kept a quarterback who threw for over 600 yards the previous week to half of that.

This defense is legit. They have proven they can handle top-tier offenses, and that will keep them in any game. The Pittman led Hogs will be a serious threat to teams down the line if the defense continues to dominate games.