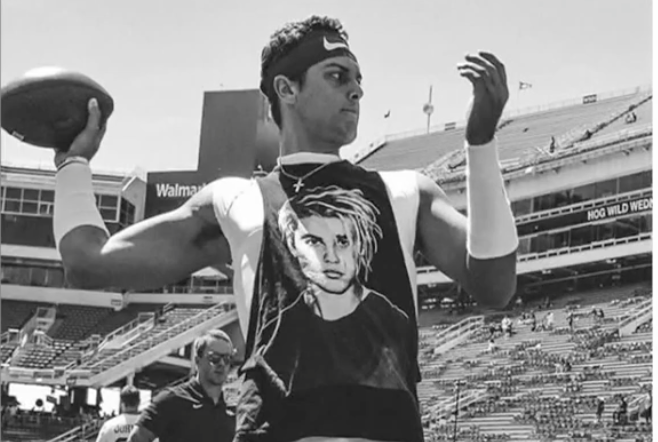 Nick Starkel arrived in Fayetteville last summer from Texas A&M with a big arm, a level of confidence bordering on cocky, and, of course, his “lucky” Justin Bieber T-Shirt.

There is rich irony here. Starkel lost the starting position — and apparently 60% of his confidence — after an absolutely horrendous performance against, you guessed it, the San Jose State Spartans.

Starkel threw 50 passes against SJSU and completed 33 of them.  The problem was that five of those 33 were to his new team.  I’ll admit it I had forgotten that he actually threw for 356 yards and 3 TDs.  So, it would be a hell of an outing if not for those turnovers.

Starkel finished the season having played in 8 games with seven TD passes and 10 interceptions. He finished No. 1 in the SEC in that interceptions category so, hey, at least Arkansas quarterbacks “won” at something last year.

If you’ll recall, it looked like Starkel was making progress until the lowly Spartans came to town.  He only threw 5 passes in the first game and went 4 of 5, but the one he missed was intercepted.  He threw for 201 yards and a TD against Ole Miss, and for 305 yards with 3 TDs with no interceptions in a win over Colorado State.

It appeared he was on his way. Hell, for that matter so did the whole “Club Dub” dancin’ lot of them.  And then the roof fell in against SJSU.  Starkel swore he’d get serious after that, even going so far as to remove his cherished Bieber shirt.

With the numbers he vomited up the rest of the season, summoning St. Justin might have been in order:

The final statistics for Starkel’s only fabled season at Arkansas show that he threw for far more yardage than all other Razorback quarterbacks on a per game basis and basically matched them on the season.  He netted 1,152 yards and completed over 50% of his passes (98 of 179).

For Hog fans this is just gross. For SJSU, it’s the zenith.

Yes, our QB play stunk this year.  Roughly 2,300 yards combined with 14 TDs against 14 INTs does not a 5-headed Heisman candidate make.

Let’s not forget Starkel, and the other four quarterbacks for that matter, should shoulder all — or even most — of the blame. Coaching matters and we didn’t have very good ones.  It matters in practice, in the film room and in game-day decisions.

Losing to SJSU was the worst loss of Chad Morris’ career. It spelled the beginning of the end for him. Perhaps, it wouldn’t have happened if Morris had just yanked Starkel to the sidelines and benched him without hesitation.  There’s plenty of blame to go around regarding the demise of the Arkansas careers of Chad Morris and Nick Starkel.

Nobody should be angry that Starkel’s leaving.  I hope he finally finds a home and gets into the kind of groove it looked like he was starting in the Colorado State game. It just didn’t work here.

What Hog fans should be angry about is that he very well could go on to an NFL career.  He has the arm. Those who scoff at this possibility should look into trajectory of former Hog quarterback Tarvaris Jackson. Jackson left after one season in Fayetteville to head to a smaller school (Alabama State) where he tore it up to set the stage for a long and lucrative NFL career. Starkel might just do the same. If so, we’ll wonder what could have been if he’d had coaching staff who to coach him up and make him a better player.

There’s another silver lining toward heading west for Starkel. Living in California might just help him achieve his dream of meeting the LA-loving Justin Bieber.

Nick Starkel Destroys His Justin Bieber Shirt, Vows To Get Real For Hogs

The below article originally published in late September, 2019

For years, Hogs quarterback Nick Starkel has been known as a fun-loving guy. He was the main Razorback player SEC Network interviewed about the Hogs’ “Club Dub,” which saw its heyday in the golden era six days after the Colorado State win.

He’s also joked about how he’s a fan of watching The Bachelorette and, most famously, he’s fully and publicly embraced Justin Bieber fandom. So much so that he wore a Bieber cutoff shirt beneath his jersey during games.

“That started when the Never Say Never movie came out [2011], because I liked a girl and I asked her who she liked, and she said ‘Justin Bieber.'” I didn’t know who that was.,” Starkel says at the 1:10 mark in the clip below. “I went to the Never Say Never midnight premiere and it just kinda stuck with me ever since.”

In the wake of the worst performance of his college career, a five-interception stinker that played a huge role in the Hogs’ 31-24 loss to San Jose State on Saturday night, Starkel has vowed to do away with the strongest evidence of his bromance:

For many Hog fans this is a welcome sign of increasing maturity for Nick Starkel, a graduate transfer from Texas A&M who will face off against his old team in the Razorbacks’ next game.

After the game Nick Starkel said: “I felt like I was trying to force the ball a little bit, definitely wasn’t taking what the defense was giving us. Just bad quarterback play. I left everybody down,” he added, his voice catching.

“I feel like we got to refocus. I lacked focus this week, and that won’t happen again.”

In another recent Tweet, Starkel told the Razorback fanbase: “I let my brothers, my family, my coaches, my University and the whole state of Arkansas down… I promise that we will respond.”

This is the kind of loss that can define a career in two ways — by how far it shoves a program off the rails, or by how high a program can rise from it as a low point.

For more on the aftermath of Arkansas’ loss to San Jose State, make sure to read my posts below: