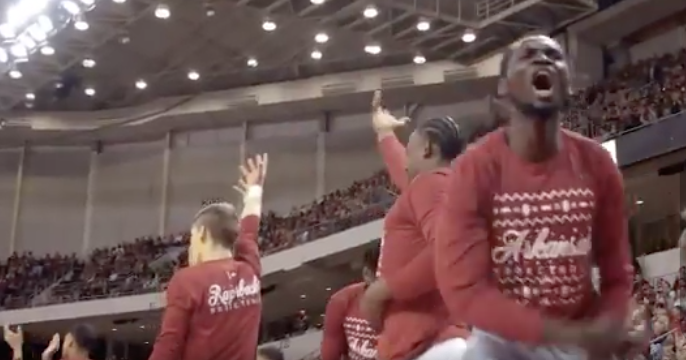 Lost amid the generally pleasant surprise of this 13-2 start for Eric Musselman’s first, and indisputably short handed, Hog basketball squad: Isaiah Joe’s play at both ends of the court had been good, but perhaps something shy of sensational.

It’s not fair to pin such massive expectations on a single player, particularly when he’s a rangy and smooth athlete of Joe’s caliber. But as he rocked a healthy 17 points per game average through Arkansas’s first 14 games, he had also been wanting for a breakout game.

That happened at the Pavilion at Oxford on Saturday night, when the sophomore hit five second-half threes and keyed a huge rally in the final eight minutes as the Hogs stormed back from a double-digit deficit (again), turned downright sinister at the free throw line (again), and ended up with a narrow victory (again) by a 76-72 margin.

Joe’s career-best 34 points featured his usual array of stop-and-pop rainbows from long range. But it also showcased his growing embrace of driving to the basket and the value of his long limbs and instinctive maneuvering at the defensive end. He was brilliant on a day where backcourt compadre Mason Jones fought to find any kind of shooting rhythm. (Note: Jones, ever the competitor, still ended up with a respectable stat line of 13 points, a season-best nine assists, and team highs of six boards and three steals.)

This victory took most of the sting away from a midweek loss at LSU that shined a rather unfavorable light on the Hogs’ inescapable rebounding struggles. Losing that game by a deuce despite getting trounced 51-23 on the glass, Arkansas proved even in defeat that it will be inordinately pesky and absolutely and completely invested in Musselman’s scheme.

The Hogs were on the wrong end of the depth of talent comparison against the Tigers but, as has become customary, made the entire second half a nerve-wracking ordeal for basically anybody watching or having a rooting interest in either team. It was a crushing loss — or at least it could have been.

Instead, thanks to Joe’s Saturday night sizzling and Musselman deploying some additional defensive brilliance in the later minutes (AGAIN!), it ended up being just about the best possible .500 week you could envision. The fact that Arkansas could compete so zealously against a certain tourney team like LSU in its house, with all those bigger Tiger bodies shielding off the Hogs’ guards for rebounds, validated the Musselman hire tremendously. Think about it: how many teams can get scalded in the paint so badly and still end up with a shot to win in the final seconds?

Joe’s big effort at Oxford, and Whitt’s suffocating late-game defense and deft free throw touch, did a lot to turn heads for those on the proverbial outside who might have wondered if the Hogs’ record had been overly fattened at the expense of mediocre teams. Yet as the season has progressed, the pivotal contributors among this tight-knit and impassioned group are upping their efforts. It’s a testament to the impression made by a new staff with more technical philosophy than its predecessors’.

The variables that separate 2-0 and 0-2 in a week of SEC play are tiny. Arkansas might’ve split the proverbial difference in two road tilts, but the way the team acquitted itself under duress measured over and above a .500 winning percentage.