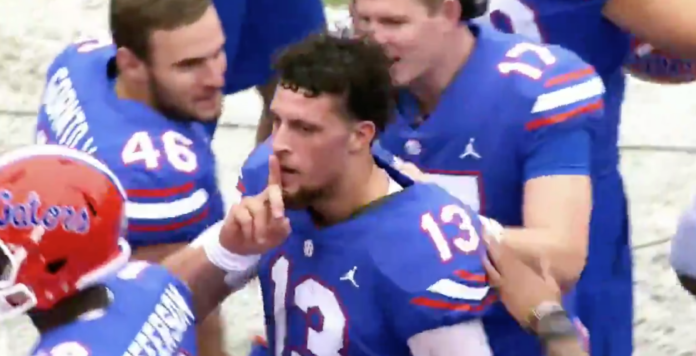 Before he landed in Fayetteville as the favorite for Razorbacks’ next starting quarterback, 22-year-old Feleipe Franks considered leaving college altogether.

Coming off a broken leg early in the 2019 season, Franks announced to his former Florida Gators team that he would either enter the NFL or transfer.

When Franks, now a Hogs quarterback, started getting feedback on where he’d likely get drafted in 2020, it’s almost certain he didn’t like what he heard. It’s not what he hoped for after a breakout 2018 season, throwing 24 touchdowns to only six picks — the best ratio from a Gator quarterback since Tim Tebow.

And he occasionally flashed Tebow-esque running ability, too:

Florida takes the lead over Michigan after Feleipe Franks takes it to the house ?

The 6’6″ “Feleipe Franks has an NFL arm, there’s no doubt about it,” former Hogs quarterback Quinn Grovey said on the Buzz 103.7. “From a mobility standpoint, he’s a willing runner, but he’s not going to be dynamic by any stretch of the imagination from a zone read perspective.”

“You’re not going to overcommit to stop him from running the football, but he does have the ability to get out of trouble. He has the ability to pull the football down and make five or six, seven yards. Sometimes that’s all you need from an offensive perspective is to keep that defense just a little bit honest.”

To be even more honest, though, there were plenty of bad times, too.

“Franks is going to make some throws that Arkansas fans haven’t seen since Ryan Mallett,” writes Connor O’Gara of Saturday Down South. “Franks will probably also make some decisions that remind Arkansas fans of Cole Kelley (no offense). Will we know when either of those instances are coming? Probably not. That’s the Feleipe Franks experience.”

For proof, just look at the incredible throw Franks pulls off at the 5:15 mark here:

Then, on the first play of the next possession (in the fourth quarter), he threw a pass into a group of Miami defenders — without a single teammate in sight.

“It was the type of throw you don’t make in the 1st quarter, much less in your own territory late in a game in which you’re preserving a 1-score lead,” O’Gara added.

Indeed, Franks’ lack of consistently good decision-making is a major reason Arkansas has him for one season in the first place. In the weeks before he announced his transfer, Saturday Down South’s Matt Hayes spoke to a couple NFL scouts about him:

“Are you kidding? He has to stay (in college). What has he done to warrant any kind of Day 1 or Day 2 grade? He’s an unbelievable physical specimen, but he’s also an overwhelming project. You’re talking about a guy who, from game after game of tape, struggles with concepts (of the passing game).”

By transferring to Arkansas, Franks didn’t land in a pro-style QB incubator. With offensive coordinator Kendal Briles and premier wide receiver and tailback talent, though, he is stepping into a situation where he could put up huge numbers if everything clicks.

Franks’ top two choices to transfer were Arkansas and Kansas. Whereas the Jayhawks run in a more high-flying, pass-happy run and gun offense, Briles’ offense focuses on running the football.

“It’s the veer and shoot, it’s not the shoot and veer,” college football analyst RJ Young points out. “But they’re going to take the top off the defense and you’re gonna need a guy with a cannon who can absolutely unload the football and is also a third threat in a triple option sort of scheme. And by ‘triple option,’ I mean you can hand the ball off to the running back, you can keep it or you can toss it.”

The key for Hog fans, Razorback insider Mike Irwin adds, is to not expect a dual-threat prodigy. “I really believe that there’s a lot of Razorback fans that have what I call Matt Jones-itis. They want another Matt Jones,” Irwin said.

“Well, a guy like that comes along about once every 50 years. So I don’t think you’re going to get another 6’6” guy that can run like he did and throw as well as he did. So let’s look at why they might’ve been more interested in Franks than [D’Eriq] King.

While King is better runner than passer against Power 5 competition, “in the SEC, you’re always going to have a guy that throws it more than he runs it.”

“Why? Because you don’t want to get him hurt. The league is much too physical to have a quarterback that is more run than throw.” Irwin also points out that the top returning quarterback prospect, KJ Jefferson, has thrown for a total of about 190 yards and zero touchdowns in his college career. “What do you got with Franks? You got a guy that is thrown like 36 touchdown passes over 4,000 yards. You could combine all of the passing yards that Arkansas has three existing quarterbacks have, and Franks has 10 times as many passing yards and eight times seven, eight times as many touchdowns.”

“So why you wouldn’t want to bring him in?… If somebody says ‘We don’t want Franks,’ you need to suggest that they go see a psychiatrist.”

No doubt, the talented KJ Jefferson will be disappointed if he doesn’t win the starting position in 2020. But Quinn Grovey believes the competition will only help all parties. “At the end of the day, if you’re playing quarterback at an SEC institution, you’ve got to want competition. You gotta love it. So both those guys have got to pull up their bootstraps and just go to work.”

Looking Ahead: Feleipe Franks in the SEC West

Given the extreme success Briles has had with dual-threat quarterbacks at Baylor and Houston, Hog fans should be cautiously optimistic about Franks.

While he will have ups and downs, they should not be as extreme (or terrifying) as Nick Starkel’s, because he already has much more Power 5 experience and — most importantly — he has the benefit of better coaches.

“I really like this,” RJ Young said. “I was hesitant at first, but the more I took a look at it, the more it feels like if Feleipe Franks can really learn the sauce of Kendal Briles’ offense like some quarterbacks have been able to do, there’s no reason to believe that they can’t put up a bunch of yards.”

If so, in 2020, ” we might be able to talk about Arkansas the way we were talking about Southern Methodist last year. Maybe they’ll surprise some folks, but it ain’t gonna be a schedule for the faint of heart.

“I expect Jim Fisher and the Aggies to come on. Alabama is my early pick to win the national championship. We all know what LSU was last year, and even if they’re not what they were last year, they’re still gonna be pretty dog gone good this year. And Notre Dame [Arkansas’ second opponent in 2020] is always going to be in this conversation — at least at the start of the season — about teams that can reach for a national championship.”

“So you’re gonna get a good test and a good understanding of just how good Arkansas can be early on. I’m going to be looking forward to that…. I don’t think we’ve ever seen this quality of coaching in one division at the same time ever in the history of the sport. And I’m excited to see what Feleipe Franks, Sam Pittman and Kendal Briles can conjure up offensively, Then, defensively, what can Barry Odom give us with a Razorback group that is aching to win?”