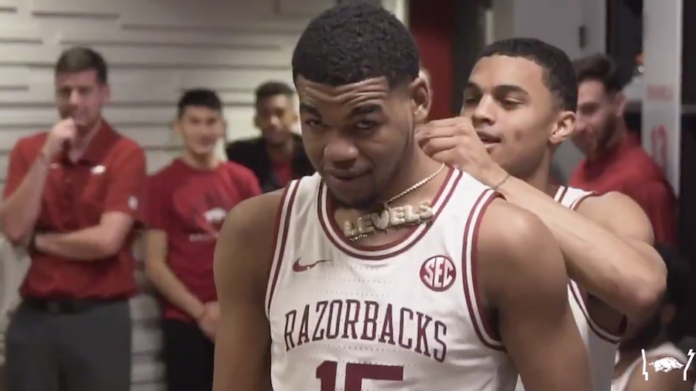 Eric Musselman still has never lost three games in a row as a college head coach.

His Arkansas team came into Saturday afternoon’s SEC/Big 12 Challenge game in jeopardy of such a feat after back-to-back losses to Kentucky and Mississippi State.

Yet the Hogs dropped the hammer on TCU anyway, producing what Razorbacks coach Eric Musselman referred to as Arkansas’ “best win” of the season so far.

“I thought it was the most efficient offensive game we’ve had all season long. Desi Sills was awesome off the bench, Jalen Harris gave us incredible pressure on the [TCU] defense by pushing the ball,” Musselman said afterward.

Joe’s absence was announced shortly before tip-off on account of tendonitis in his knee. It’s not yet known if he’ll return in Arkansas’ next game against South Carolina.

Joe is among the nation’s leading three-point shooters but had struggled in the last couple games. He hadn’t been able to break down defenses and attack the hoop like he had earlier in the season. Against Kentucky and Mississippi State, Joe was content to stand outside the arc and shoot.

Without Isaiah Joe, “they really got more penetration and attack into the lane,” Dixon said. “When we learned he wasn’t going to play, we talked about them attacking off the dribble more. That’s probably where they were more effective because he wasn’t out there.”

TCU jumped out to a quick 4-0 lead to start the game and Hogs head coach Eric Musselman called a timeout. Arkansas responded with an 8-2 run. Behind TCU’s 6’11” center Kevin Samuel, the Horned Frogs battled back and grabbed a one-point lead (11-10) with 14:56 remaining in the half.

The teams combined to score just seven points over the next three-and-a-half minutes as the teams were tied, 14-14. Whitt got a steal and fastbreak dunk with 11 minutes left to put the Hogs up two (16-14). Arkansas stayed in attack mode, never relinquishing the lead the rest of the game.

“The turnovers killed us,” Dixon said. “We had three carry calls, two three-second calls — that’s a first for me.”

Afterward, Musselman praised Whitt, the graduate transfer from SMU. Not only did Whitt again shoot more than 50% while hitting the 20-point mark, but he also stifled TCU’s leading scorer Desmond Bane all night, limiting him to six field goal attempts.

Watch all the Arkansas-TCU highlights here:

“Defensively, we utilized a scheme we hadn’t all year where we face guarded [Desmond Bane.] The goal was to limit him to 10 or less shots. Watching game film, we felt he needed to get 15 shots up minimum.”

“Jimmy [Whitt] was awesome. He didn’t come off the floor for even a single blow. He face guarded Bane all night.”

“I’ve been around two NBA level defenders that I’ve coached at the college level — Cody Martin [who now plays for Charlotte Hornets ] and Jimmy Whitt. I don’t know that there’s a college guard who’s doing any more defensively than what Jimmy’s doing.

Here is some more press conference insight from the two head coaches:

Eric Musselman on what the win — the Hogs’ third non-conference victory over a Power 5 team — meant for him:

“I was wound tighter than a …. Last night was the hardest night I’ve had here sleeping.”

Jamie Dixon on Mason Jones, who erupted for 19 second-half points:

“He got in the lane with penetration. I was really disappointed with us. He’s good though, that’s what he does. Give him credit. I thought we’d do a better job with that, we didn’t.”

Finally, Dixon had some fun with the Arkansas Democrat-Gazette’s Bob Holt, a longtime Razorback basketball beat writer who has never been shy about firing off at least 10 questions in each press conference:

Bob Holt: On the technical, all you were saying was it’s a carry?

Jamie Dixon: Carry, yes, a carry. No bad words, nothing.

Bob Holt: Are you surprised you got T’ed up?

Bob Holt: And are you upset you did?

For our latest post, make sure to check out this: