For Razorback fans, the question never gets old: Will basketball coach Mike Anderson lift the program to the same levels reached by his mentor Nolan Richardson? Tonight’s game, on the road against No. 20 Iowa State, should provide the best start of an answer yet. The greatest Arkansas teams of the early to mid 1990s regularly defeated ranked non-conference teams away from home but that hasn’t happened since 1997*. But, so far, all signs point to this being the best Arkansas team since that era.

The most dramatic evidence is below. Look at this steady improvement through Anderson’s first four seasons in Fayetteville:

The Razorbacks’ scalding shooting from the outside this season – 46% on three-pointers – has been a major reason for the boost in Effective FG % and True Shooting % (definitions below). That shooting helps space the floor and lead to a nation-leading assist rate. But the Razorbacks can’t rely on shooting at this clip in the kind of hostile environment the Cyclones’ Hilton Coliseum will present. So it’s important they get to the line and build an early lead.

Referee bias (conscious or not) toward the home college team makes it doubly difficult for visitors to play from behind or in a back-and-forth affair. “On the road especially you want to help keep the officiating out of it as much as you can,” Nolan Richardson said in a phone interview.

As always, defense fuels offense for a “40 Minutes of Hell”-style program. The below numbers show that while Arkansas is playing at a faster rate than ever in the Anderson era (78 possessions per 40 minutes vs. 72 in his first year), they are barely giving up more points. This is a credit to the lower rate at which they are fouling this year than the past two seasons (more experienced players) and fresher second-half legs generating turnovers at a higher clip (more depth). 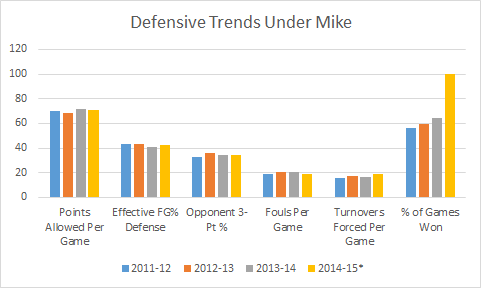 It’s likely older Razorback stars like Bobby Portis, Rashad Madden and Michael Qualls will play well at Iowa State, where the Cyclones are 50-4 the last five years, Iowan-Arkansan sportswriter Nate Olson points out.  They proved they could deliver on the road last season and have played in similarly intense arenas like Kentucky’s.

The pivotal issue is how Arkansas’ three first-year guards – Anton Beard, Jabril Durham and Nick Babb – play. “You’re as good as your guards take you,” Richardson said. So far, all three have played their supporting roles well but they have played in only one game away from Bud Walton Arena. While often what’s needed is a timely, clutch three in the vein of Scotty Thurman, this year the right play may simply be avoiding a turnover and making a timely entry pass to Portis. Last year, “we got discombobulated in the final few minutes of games,” Portis told USA Today, recalling seven losses in ten road games. “Are we going to finish teams off? That’s the biggest question.”

To me, North Little Rock native Anton Beard is the most important of the three young guards. Perhaps I’m simply biased,  as I have followed him closely since he was a freshman in high school and seen many of his games at Parkview High and North Little Rock.  He’s a champion, point blank, winning three state titles in four years. Point guards simply don’t start for Parkview coach Al Flanigan as freshmen. He’s the only one who has, and that season I watched him lead his team to a victory at Hall High School in the middle of its four-year run of consecutive state championships.

So far, Beard the collegian freshman has played the role of a scrappy, clutch shooter (46.2% on threes) off the bench who has a not-stellar 1.2 assists-to 1 turnover ratio. “Beard is moving in a pretty good direction,” Richardson said. “For the Razorbacks to be where they got to be, his game has got to improve.” Beard is fairly stocky, but Richardson says he (and all other current Razorback guards) don’t compare in the physical toughness department to Corey Beck, the point guard of his ’94 title team. “Beck was an animal.”

Perhaps the most apt comparison for Beard, at this point, is Arlyn Bowers who ended up pairing with Lee Mayberry as guards in Arkansas’ 1990 Final Four run. Two years before that, Bowers and Mayberry were just starting out as freshmen in Nolan Richardson’s fourth year as head coach.

Just six games into Year 4, it’s difficult to conduct a thorough comparison of Nolan Richardson and Mike Anderson as Razorback head coaches. Obviously, the jury’s still out on Anderson. But the sample size is large enough now to at least take a look: 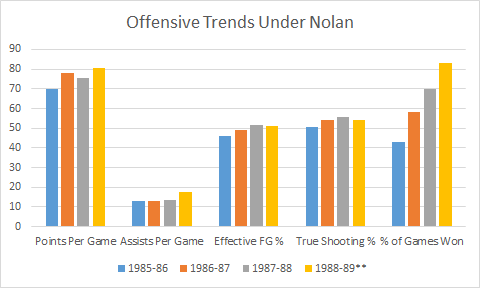 Comparing these numbers with the last four seasons,  we see Anderson’s teams have improved at more steady clip, year by year, in most categories. And from an overall statistical standpoint, Anderson’s Year 4 is significantly more impressive so far than Nolan’s.

But it’s important to note that Nolan’s Year 3 team finished 11-5 in conference vs. the 10-8 record Mike’s Year 3 team had. Nolan made the tournament in 1987-88 (losing in the first round to Villanova) whereas Mike hasn’t yet. In Year 4, Nolan got a massive injection of talent when Bowers and Mayberry arrived, along with fellow freshmen Todd Day and Oliver Miller. Their play paid immediate dividends, and the Hogs ultimately finished 13-3 in conference and 25-7 overall. They lost in the 1989 NCAA Tournament’s second round.

** Using data from six of Hogs’ first seven games in 1988-89 (Box score from Game No. 5 not available at HogStats.com).PS: Partial season data not available for Turnovers Forced Per Game, so this stat instead reflects per-game average from entire 1988-89 season.

Breaking Down the Game of Stanley Umude, Potential Ace Scorer for Arkansas Basketball