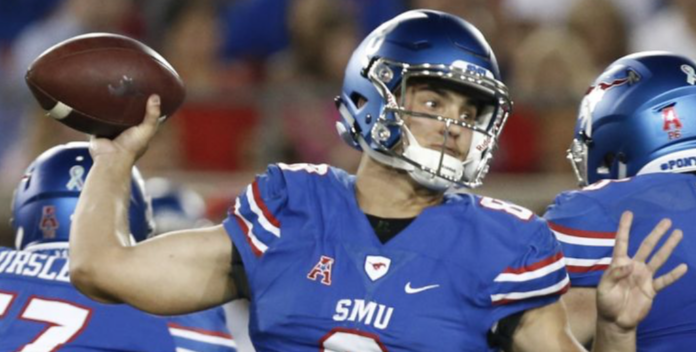 New Razorback quarterback Ben Hicks, a transfer from SMU, had his first interview with an Arkansas media outlet today. On “The Morning Rush” with John Nabors and Tommy Craft, Hicks discussed some of the questions Hog fans are most curious about:

On whether Chad Morris can turn Arkansas around despite his debut 2-10 season:

Ben Hicks: “Well, we saw it at SMU. The first year at SMU wasn’t great, but we just gradually got better and better. I think that’s what he’ll be able to do, and what I hope to do when I come to Arkansas.

I look forward to this season. It’s gonna be a lot of fun to get back to work with those guys [former SMU coaches Joe Craddock and Chad Morris]. I’m real excited:

On what it’s like working with Chad Morris to develop as a quarterback:

Ben Hicks: “Coach Morris is real smart guy. He understands football, he understands quarterbacks, and he’s always … juiced up and ready to go. That energy kind of feeds over to the team.”

To see how Morris works with quarterbacks on their technique, check this video from his early 2010s tenure as Clemson’s offensive coordinator:

On what he knows about his future teammates on offense:

I got to talk to a few guys this week on my visit. You could feel the energy and the excitement with those guys and I’m really looking forward to working with them.”

On his visit to Fayetteville:

Ben Hicks: “I got there around 2 o’clock on Saturday. I was able to talk football to Coach [Joe] Craddock for a while, and then they showed me around. Morris got back into town around 4:30 and we went to the basketball game.”

“I got a feel for the environment and the fans. Obviously a great fan base, which I saw at the basketball game. That got me real excited…”

On making the jump from the American Athletic Conference to the SEC:

Ben Hicks: “Playing in the SEC was always something I dreamed about as a kid. It’s obviously the best conference in the country. To be the best, you’ve got to the beat the best… It’s a test for myself. I’m excited about the opportunity and it’s gonna be a lot of fun.”

On what he wants Razorback fans to know:

The above excerpts were edited for clarity. Listen to the entire thing on the Morning Rush Podcast here.

We know Ben Hicks is excited. But is he better Than Ty Storey? If so, how much better?

These will be among the biggest questions facing the Razorbacks’ offense this spring and summer. Can Ben Hicks make the transition from playing against mid-major competition (in which he struggled throwing interceptions) to playing against SEC competition? Sports talk show host John Nabors and Tommy Craft went into a deep dive on these issues. Listen at the 2:55 marker below:

This was the second interview Hicks has conducted since choosing to transfer to Arkansas. Click below for the first: