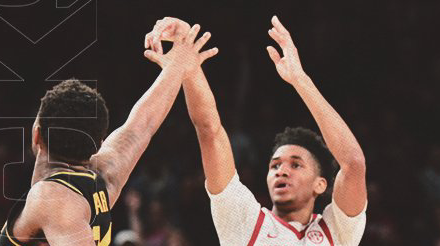 Backs against the wall.

This has been one of the hardest weeks of the Mike Anderson era. Going into Wednesday night’s home game against Missouri, Arkansas had lost four games in a row — a first for the Razorbacks with Anderson as head coach.

Fortunately, at long last, the Hogs were finally able to crush a foe through its full-court press. Arkansas racked up 13 steals to Missouri’s two steals, which led to fast break point after fast break point.

Some of them came with a splash of the net courtesy the prodigious shooting of freshman Isaiah Joe. Joe had picked it up in the last couple games after a rocky start to SEC play and entered the game as the most prolific three-point shooter in Hogs history in terms of threes per game (3.6). He added to that lead by making seven of 12 three-pointers against Missouri.

Those bombs helped Arkansas land the knockout blow en route to a 72-60 win.

Joe should remind Bradley of himself.

He has now tied Pat Bradley for the most prolific three-game, in-conference shooting stretch in program history.

Bradley, as a freshman, went off for the following (boldfaced numbers are the three pointers made and attempted).

These is pretty rarified air, and it will be interesting to see how Joe develops from here on out this season. I have a feeling his confidence will only improve as the shock of the higher level of competition in the SEC wanes. He’s already faced some of the hardest possible competition in Tennessee, LSU and Ole Miss, after all.

So, you’re probably wondering how some of the other all-time great Razorback shooters stack up to these two. Below is a list of their greatest three-game stretches in SEC play:

Check out what Isaiah Joe had to say after the game here:

When many Razorback fans talk about amazing Hog shooters, they automatically think of Al Dillard — who could heat up like nobody’s business on the great ’94 and ’95 teams.

Where does Dillard rank in all this?

To discover that, check out the below feature on the best three-game shooting streaks in non-conference: