Hugo Bezdek, the the football coach who led the Hogs to their first undefeated season, was a bit of a character. Or at least, that’s how a former NBC sports director described him during a yarn he told about the third time Bezdek led a team (Penn State in this case)  to the Rose Bowl:

“Even though the game was scheduled to start at 2:15, Penn State didn’t arrive in the Rose Bowl until 2:30,” Bill Stern said in 1948, according to the Daily Capital Journal in Salem, Oregon. “When State did show up, the surly Mr. Bezdek said his team had been caught in a traffic jam. By this time, Coach Henderson of USC was hot under the collar. He didn’t believe Bezdek’s story, and bluntly accused the Penn State mentor of stalling. Whereupon Bezdek blew up.

He turned to Henderson and at the top of his lungs shouted: ‘You’re a liar!’ And at the same time he invited Henderson to take off his glasses. However the two coaches (who were more ‘up’ for the game than their players) were separated before any blows were struck…”

Bezdek had a temper, no doubt, and it sometimes got the best of him. In the Jan. 10, 1948 issue of the Daily Capital Journal, sports editor Fred Zimmerman wrote that according to a former player, “He was like that before every game. He worked all of the angles to get his players keyed up to a fighting pitch and he wasn’t averse to insulting anybody who crossed his path.”

Zimmerman continued: “Bezdek’s psychology, or whatever one may care to term his maneuvers, once got unexpected results. He invaded the realms of the chef of a prominent Portland restaurant yelling state of the steaks served, but he emerged faster than he went in when the cook chased him with the one of his long carving knives.’

Below is yet more evidence of Bezdek’s penchant for getting himself into sticky situations. It comes from the May 31, 1907 Albany Daily Democrat. 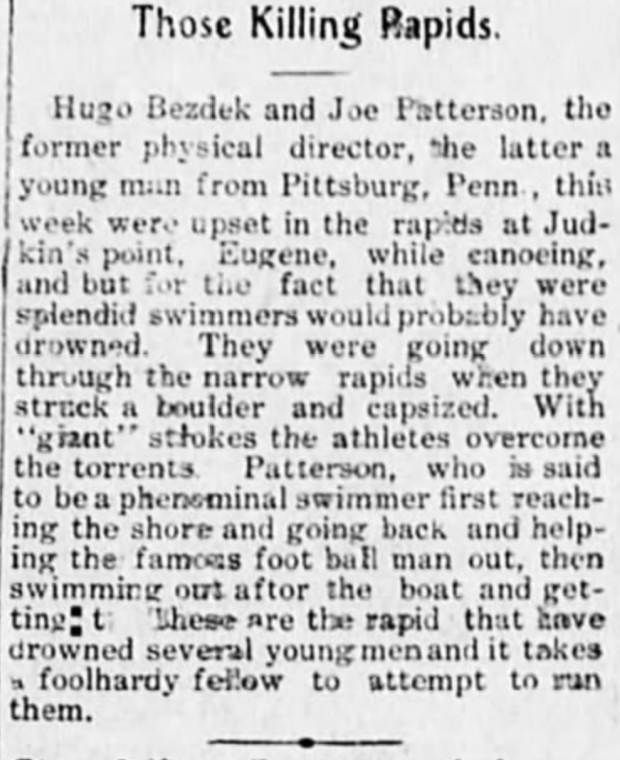