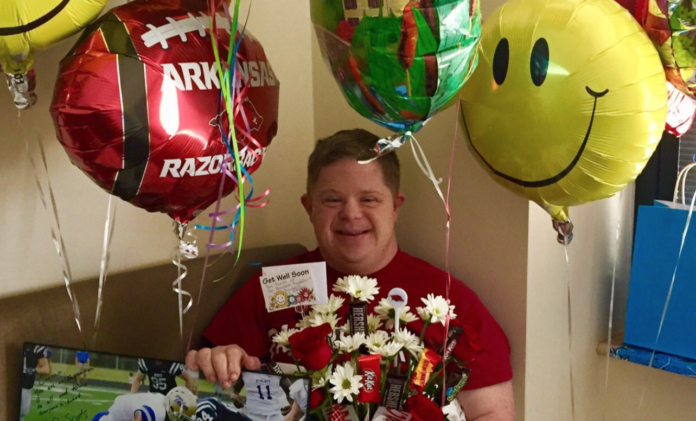 The most inspiring Razorbacks story of 2019 so far has little to do with sports.

It has everything to do with the program’s greatest fan and how much the fan base, players and coaches care about him, too.

We already knew how deeply Canaan Sandy loved the Razorbacks. For years, the Batesville area native has been a fixture at Razorback events, fundraisers and games involving all sports, a pure smile beaming across his face. Sandy, now in his mid 30s, was diagnosed with Down syndrome as a child and cannot live on his own.

But that hasn’t kept him from thriving.

Sandy was the first student with Down syndrome to graduate from Cave City High School at age 21. He took college-level courses through the high school, and played a monk in Batesville Community Theatre’s production of “Nunsense, the Mega Musical.”

“He helps on the farm and assists his mother at the local community theater, where he’s been acting since he was six. The Sandys are devoutly religious. Canaan is an usher for the local church and gets to sing a song every week.

He’s been a 4-H member since he was five and was elected to the Arkansas 4-H Hall of Fame. He’s served as a state officer, state ambassador and the Arkansas representative to Washington, D.C.

Canaan has also shown pigs on a national level. He was featured in the first-ever youth edition of the National Swine Association magazine and pictured on the National Showpig brochure.”

Sandy has long been beloved by the Razorback athletics (he even got to play in the 2014 spring game), but the depth of that affection became most obvious this past week.

It began when Sandy suffered a sudden stroke and was hospitalized in Batesville for a few days.

Razorback football coach Chad Morris called the hospital and his mother, Ginger, many times to express his concerns and check on Sandy’s status.

Tens of thousands of Razorback fans took to social media to offer prayers and show love. Some of the biggest names in Arkansas sports media, from Richard Davenport and Steve Sullivan, to Bo Mattingly to Randy Rainwater, Tweeted their prayers and concerns. They also reported live on how Sandy was doing.

Rainwater, for instance, wrote that doctors saw a blockage in blood vessel in Sandy’s neck but he fortunately wasn’t paralyzed. Indeed, within a day, he was “talking better & has some facial changes but getting better! Prayers being answered but prayer warriors don’t let go of the rope! Keep those prayers heaven bound! More work to be done! GOAT!!” Davenport reported that Sandy, while he recovered in his hospital room, “has been handing out the hugs when he’s awake. Has won over the nurses.”

A couple days in, Sandy was feeling much better!

As Sandy was recovering, he followed his beloved baseball Hogs during their weekend series against Missouri. Fortunately, Arkansas didn’t lose a game. As KATV sportscaster Steve Sullivan reported, “Canaan Sandy was following every pitch tonight on his IPAD. Big thanks to Hog baseball team for making it a low stress night for their biggest fan.”

A couple days ago, Canaan Sandy was released to go home. To say he was geeked would be an understatement:

While Sandy could return home, he needed to wear a heart monitor. That’s on the orders of the doctor, as well as the head Hog himself:

Now, Canaan Sandy is back home on the farm, resting up and ready to root on the Hogs through good times and bad. He and his family went through a very scary ordeal, but there’s a silver lining. They know, more than ever, that the fandom, devotion and love he shows the Razorbacks is reflected right back.

As Steve Sullivan says, “he’s the only Hog fan I know that deals in a very rare commodity — unconditional love.”