Search
Home Arkansas Baseball Go Ahead and Give Kevin Kopps the National Pitcher of the Year... 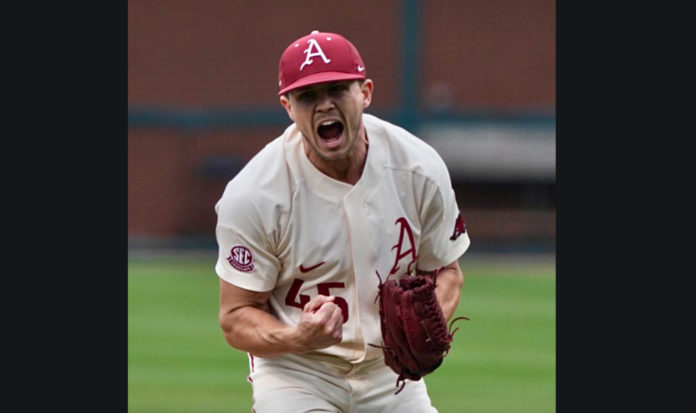 Unless and until he stops giving us reasons to do so, we’ll just keep on fawning over Arkansas baseball’s super-closer Kevin Kopps.

Superlatives die each weekend that the sixth-year senior toes the rubber for at least a couple of innings of kinetic, shutdown relief.

Most recent case in point: On Sunday, with the Hogs down 0-3 in the rubber match against Georgia at home, Kevin Kopps stepped in and saved the day yet again. He cooly pitched 4.1 innings, giving up only three hits while throwing five strikeouts and surrounding zero runs.

In the end, the Hogs won 5-3, kept their hold as the unanimous No. 1 in the nation and are now 8-0 in SEC series for the first time in program history.

Streaks are made to end, of course.

Theoretically Kopps will have an outing, if not more than one, that doesn’t go so well.

That seems more unfathomable, though, with every performance.

After I propped him up here a few weeks ago as a dark-horse SEC Player of the Year candidate, I felt shamelessly prescient as he mowed down South Carolina, LSU and Georgia hitters the past three weekends.

But with the way he’s performed recently, Kevin Kopps has gone beyond “darkhorse” candidacy. And he’s well beyond being “in the mix” for SEC Player of the Year, as well, as Arkansas baseball pitcher Ryan Costeiu pointed out after Sunday afternoon’s pyrotechnics:

Although the SEC is more than capable of screwing up a postseason award for a Razorback, Kopps should be shoo-in for that award at this point.

In fact, based on body of work so far this season, Kevin Kopps needs to be the frontrunner for the National Pitcher of the Year award. For starters, he’s thrown 83 strikeouts in 49.2 innings of relief work.

He also leads the nation with a .72 ERA and has been the most dominant player on an Arkansas baseball program that has held the nation’s No. 1 spot for 10 weeks now.

For comparison, below are all the previous winners of the National Pitcher of the Year award and their ERAs:

*Lowest ERA in college baseball since 1979.

**Mississippi State’s Landon Sims has also been torrid this season with 63 KOs and a 3-0 record, but his .56 ERA doesn’t yet qualify for the official NCAA leader board.

That’s a grand total of one national pitcher of the year award winner who has had a better ERA than Kevin Kopps.

That Kopps can do this in the toughest league in the nation is extremely impressive, and you’d better believe MLB scouts are taking notice.

So how did we get here, anyway? I mean, for real?

Kevin Kopps’ meteoric ascent to potential high MLB draftee isn’t some grocery-bagger-to-Super-Bowl-MVP fairy tale like that of Kurt Warner. He’s always had plus material, and a mind to match.

Kopps’ Arkansas baseball redshirt freshman season in 2017 showed him to be a cagey, versatile arm.

But he had to watch the team’s 2018 run to within a whisker of championship glory thanks to rehabbing from Tommy John surgery.

His 2019 return was good, if erratic: a 6-3 record across 30 appearances showed he was effective and durable. But he also struggled in SEC play with his three losses all coming in league games, and his ERA being a full run higher in those contests.

Arkansas and Kopps both underperformed in the COVID-truncated 2020 campaign. For his part, the native Texan just didn’t miss bats at all, yielding a whopping 18 hits in 11 innings. Four of those left the yard, an alarmingly high rate of longballs.

In a three-year span with Arkansas baseball, Kopps experienced it all: fits of dominance, a significant physical setback, arduous recovery, pitfalls and peaks.

Then, mired in struggle, he watched all of it stop in March 2020.

That very easily could have been the death knell for a veteran college pitcher’s career. Kopps, after all, kept his pitches too high in the zone for key parts of 2019-20. You can perhaps survive that if it’s triple-digit heat, but Kopps thrives on movement and location.

He trudged on back for this sixth year, and of course, his savvy and resiliency seemed to be the assets. The question was what kind of stuff he’d have in 2021.

Arkansas baseball pitching coach Matt Hobbs, himself a highly analytical sort, recognized Kopps’ struggles without much difficulty. Diagnosis is harder than treatment, though.

Earlier in April, Hobbs noted in an interview with Pig Trail Nation that Kopps immediately adapted to a mechanical adjustment, throwing a two-seam fastball with a tighter delivery. “It’s probably a five inch difference in his release side and that brought down some of the vertical break numbers on his cutter,” Hobbs observed.

The visual comparisons between a Kopps 2019-20 and 2021 delivery are slight, but meaningful. Moreover, Kopps’ discipline and diligence showed in his attention to his conditioning.

Hobbs noted that Kopps “got himself in great shape” in the offseason.

“I think he dropped something like 15 pounds and he looked completely different in the way his body was shaped and it looked different in how the ball was moving.”

Kopps sprinkles in mid-90s heat with the deadly cutter and sinker. He touched 94 and 95 in the South Carolina and LSU series, doing so with command, and then pulled the string on hitter after hitter en route to 21 punch-outs over 10 1/3 innings across four appearances.

That left the season numbers looking like something out of RBI Baseball: 6-0 record, 0.85 ERA, 75 strikeouts in 42-plus innings, and only two longballs allowed.

He’s such a marvel at this point that he’s threatening to upstage Vanderbilt’s Kumar Rocker-Jack Leiter combo in the postseason awards ceremonies, and already has a National Pitcher of the Month honor.

“You wanna say he’s just hot, right?” Hobbs said in the below interview with 103.7 The BUZZ.

“But it’s more than that. He can manipulate a pitch that was already hard to hit about three different ways, and he couldn’t do that in the past.”

Kopps’ precision with his arm would mean little without the head on his shoulders. His practice after another strikeout is to show a hint of satisfaction, then get right back to work.

And he works fast.

The reason Kopps is rapidly assuming frontrunner status for these conference-wide and national honors is rooted in performance. Time and time again in SEC play, he’s practically insulted lineups full of prospects.

“The other team…know[s] what we’ve got in the pen in terms of Kevin, and so they have to try to score off everybody else, and they press a little bit.”

Kevin Kopps knows a bit about pressing, it seems.

That’s perhaps what he was doing a year ago, but no longer.

“He had such a rough season in 2020 that I think he takes zero things for granted,” Hobbs noted. “He’s already been to the bottom. And he’s worked his way up. And he’s a smart enough person, and a good person, that he just doesn’t take anything for granted.”

Being such a veteran presence means he won’t likely require much minor-league conditioning. That kind of ready-made talent presumably won’t last long in the draft this summer.

Kopps, though, seems fiendishly locked in on what his Hogs have to do the last month of the regular season.

“He does a really good job,” Hobbs said, “of riding this wave.”