Search
Home Arkansas Football Perspective The Case For and Against Feleipe Franks as a Day 3 NFL... 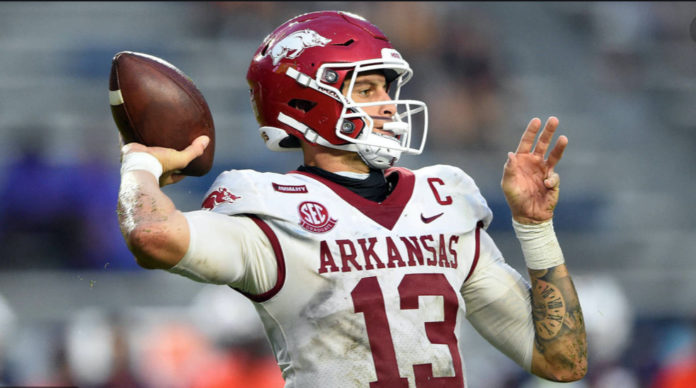 The first round of the NFL Draft is over and, like expected, a handful of quarterbacks were taken. Trevor Lawrence, Zach Wilson and Justin Fields all left in the first three picks. Justin Fields and Mac Jones weren’t far behind.

College quarterback stars like Kyle Trask, Davis Mills are will likely go on Friday in Rounds 2 and 3, but how far behind could Feleipe Franks go?

After his best season of college football at Arkansas, Franks has positioned himself as a mid-round possibility. He posted a career-high in completion percentage (68.5%), yards per game (234.1), yards per attempt (8.9) and passer efficiency rating (163.1). Paired with a career-best touchdown-to-interception ratio (17:4), 2020 became somewhat of a storybook season for the 5th ranked QB in the 2016 recruiting class.

His impressive Pro Day, in which he recorded a 40 time as fast as Jalen Hurts’, only helped his case to sneak into one of the earlier picks on Saturday.

Here’s a breakdown of the former Gator and Razorback:

Being voted captain almost immediately following his Arkansas arrival showed a crucial part of who Feleipe is — a leader. It was clear instantly to Razorback fans something different was in the cards for this season, and that shift began with Feleipe winning the locker room. It’s important for late-round guys to have a presence in the locker room.

The fact Franks did that in such a big way for the Hogs helps his pro prospects.

Franks’ stature also helps place him within the top 10 quarterback in the 2021 NFL Draft. At 6’5¾” and 234 lbs, that size is a boost in his favor, according to ESPN’s Mel Kiper.

“He has a big arm; his pocket awareness progressed as the season went along; and you can’t ignore his size,” said Kiper. “There’s some things I like about him, maybe as a late-round, down the road.”

For years, Franks was widely perceived as a pure pocket passer, and though he didn’t consistently present the dual-threat dangers which have become so common in today’s NFL, his size often made up for that.

That’s not to say he’s the Tin Man when navigating the pocket. Below, former NFL quarterback turned draft analyst J.T. O’Sullivan argues the opposite in his breakdown of Franks’ showing in Arkansas’ 24-13 win over Tennessee last season.

“You can obviously tell he’s well-coached,” said O’Sullivan, “playing the position with a strong base will give you a chance to be successful, and they (Razorback coaches) take advantage of that.”

“For being such a big dude, he does a really nice job of being strong on that back foot; balanced, powerful.”

Though he has gained a reputation as the traditional pro-style pocket passer, Feleipe Franks showed off his wheels at the Razorbacks’ Pro Day with an unofficial 4.55 40-time. That would put Franks dead even with Trey Lance, and just behind Justin Fields, as the 2nd fastest QB to run in the 2021 class.

Such straight-line speed, while it didn’t necessarily always transfer into yardage, is a fantastic tool for the right offensive mind at the next level.

Franks really stands out when it comes to precision and accuracy.

But he’s No. 2, behind only Mac Jones, when it comes to “On-Target throws,” defined as throws that do not force the receiver to adjust to the ball or slow down, as SB Nation’s Paul Noonan points out.

Here are his strengths, as broken down by NFL.com’s Lance Zierlein:

Scouts and draft analysts, however, have also pointed out questionable decision making from Franks in stretches, as well as some issues with the timing of his passes.

Scouts also take issue with the 77 sacks Franks took across 37 games in college. Despite a career-low in interceptions in 2020, Feleipe incurred a career-high 30 of those 77 sacks with the Hogs, leading to questions about his timidness in getting rid of the ball when it’s possible to safely do so. Pro Football Network’s Ian Cummings also highlighted some of these issues in his profile of Franks.

“Franks also has trouble throwing with anticipation consistently,” Cummings wrote. “Quarterbacks have to be proactive with their decision-making in the NFL, and the Arkansas quarterback has room to improve in that regard.”

Feleipe Franks also tends to stare down his receivers, which makes any throw significantly more difficult. Though Franks was able to nearly eliminate the turnovers which had become a staple of his game at times in Florida, in the NFL giving DBs a jump on routes will bring back some of that dark past Franks dealt with in Gainesville.

“His 61.7% on-target rate for passes targeted less than 10 yards from the line of scrimmage ranked 58th out of 78 qualifying quarterbacks in 2020,” according to the Pro Football Focus draft guide. “He was so much better at taking good chances with the football downfield.”

Ty Dormer, who literally wrote a book about these 2021 NFL Draft entrants, added: “On short-to-intermediate passes, he has moments where he can put the ball right on his receiver and others where he misses his spot.”

“Usually, this results from inconsistent footwork. His build makes it tough for him to use consistent footwork getting away from center. If his first read isn’t open, he gets antsy and begins to sense false pressure, scrambling or throwing from unorthodox positions to get rid of the ball.”

Here’s how the NFL.com analysis breaks his weaknesses downs:

I believe Feleipe Franks is too gifted to not take a chance on at the next level. His decision to transfer to Arkansas allowed for improvement, and he likely gave himself a shot at a successful NFL career.

Granted, Franks will still be a project at the NFL level. Franks won’t come into the league competing for a starting job, and of course, there’s no guarantee he ever reaches a permanent starting gig with an NFL franchise. But he should be able to learn behind a starter as he continues to improve in the mental aspects of his game.

To develop a career as a serviceable backup he needs to improve on anticipatory throws, look-offs, and continuing to hone the consistent accuracy that he showed at Arkansas.

I think Blaine Gabbert is a perfect comparison when you’re looking at someone with Franks’ talent and athleticism.

At just a half-step slower than Franks out of Missouri, Gabbert came into the league as the 10th overall pick in the 2011 Draft. Unfortunately, he never lived up to that billing, and despite short stints as a starter, he’s remained a backup for the majority of his 9-year career.

With the lowered expectations, I think Franks making a 10 year run as a backup would be a tremendous success. With that type of career, you’re bound to get some chances at the starting job through injury or poor play from the starter.

For an Arkansas-fied version of how this could play out, look no further than Brandon Allen, the 6th-rounder out of Arkansas. Allen took the NFL by semi-storm after a miraculous upset over Cleveland and was able to parlay that into 5 starts for the Bengals in 2020.

Five years in the league is nothing to sneeze at, and should Franks find himself in a similar situation I’d consider that a great success.

Expect Franks’ natural ability to give him a leg up in terms of longevity over some of the other late-rounders. Guys like Shane Buechele, Peyton Ramsey, Ian Book, Davis Mill — and even Kyle Trask, Franks’ replacement at Florida — have relied on their intangibles to get to this point, yet lack some of the size and/or arm talent we see in Franks.

If he continues to work and develop that aspect of his game, it’s not a stretch to say he could be the best QB taken in the mid-late rounds of the 2021 NFL Draft

This is the part of the draft I think will either make or break Feleipe Franks’ chances to succeed in the NFL. It’s no shock that we’ve seen guys benefit from their situation in the league, but we’ve also seen promising young athletes be devastated by poor management and a lack of supporting cast.

Fortunately for Franks as a late-rounder, he’s going to have time to figure out his situation behind an established starter.

Pro Football Focus has Franks listed as their 11th best quarterback, and 241st overall prospect in the 2021 class. He’s graded anywhere from the 5th to the 7th round, and I believe he slips into the latter. Still, with plenty of teams in the hunt for a solid backup quarterback, there’s little doubt Franks will be drafted.

As for potential landing spots, three have jumped out to me as great fits for all involved parties. These three are perennial playoff teams with good-to-great veteran starters, but lack QB depth.

The Tennessee Titans (yes, I know they missed the playoffs last year but they’re always in that race), Seattle Seahawks, and Tampa Bay Buccaneers are all immensely talented casts with elite-level coaching. Behind guys like Ryan Tannehill, Russell Wilson, and Tom Brady, there’s really no limit to the development possibilities.

My favorite of these fits has to be the reigning Super Bowl Champion Tampa Bay Buccaneers (not exactly a bad place for any backup to land, I know).

Tom Brady is by all metrics the greatest to ever do it at quarterback, and he’s been backed up by a Razorback before. Though Ryan Mallett never quite broke through in New England after being selected 74th in the 2011 Draft, his time behind Brady did allow him 8 starts throughout his 7-year career as a backup.

Pair the mental monster that is Brady with “The QB Whisperer” Bruce Arians, and you have one of the most premier situations to succeed as a backup since Patrick Mahomes backed up Alex Smith Kansas City.

Franks won’t be the best QB in this class by any means, but what he can do is create longevity by using his natural ability and expounding upon that through film study and dedication.

His time at Arkansas showed an ability to right the wrongs in his game and improve attention to in-game situations. Feleipe Franks exceeded my expectations as a graduate transfer, and a continuation of that within his first few seasons will make him a multiple contract NFL quarterback.