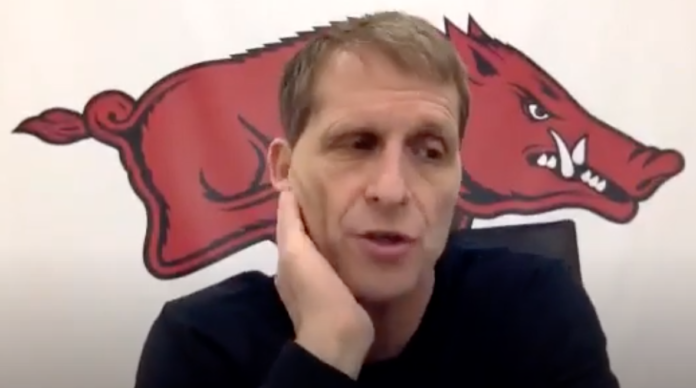 The Razorbacks have now had more than three days to regroup and heal from the back-to-back behind-the-shed whuppins they received at the hands of LSU and Alabama.

Head basketball coach Eric Musselman has had plenty of time to think about what went wrong, why it wrong and what needs to be done going forward to fix it.

Whatever the answer is, it isn’t simple. Nor is it only one thing.

In losing four out of the last five games, the Razorback basketball team has been dealing with problems on both sides of the floor at any nearly every position. Last year, for instance, Arkansas led the nation in defending the three-point line.

This year, they have become one of the worst SEC teams at defending the three-pointer. They entered conference play allowing 30.4% from beyond the arc, but that’s spiked up to 36.3% in conference play.

Musselman says what has changed is his players’ ability to quickly close out on three-point shooters with the confidence they can move quickly enough to cut off any drives off pump fakes. Last year, Arkansas had underrated defenders with sneaky athleticism like Adrio Bailey, Jimmy Whitt, Isaiah Joe and Mason Jones but this year players like Jalen Tate, Vance Jackson and Connor Vanover are slower laterally and having problems closing out quickly enough (though Vanover usually isn’t tasked with coming out that far).

JD Notae, meanwhile, has plenty of athleticism but hasn’t yet shown a dogged desire to excel on defense. Desi Sills also has the needed quickness, and was good at defending the perimeter last year, but in the last few games appears a step slower and isn’t playing with his normal swagger.

“We’ve got to get better defensively for sure. We’ve to play with a little bit of joy,” Musselman said in Tuesday’s press conference. “And you’ve got to play with confidence.”

“We’ve got a few guys who just aren’t playing with much confidence. So we’ve got to try to build that up and we need a couple of shots to fall. And then both sides of the ball, if you’re not defending at a high clip, you can’t let that affect your offense, and then vice versa.”

Offense, too, has been a huge issue.

Three-pointer droughts are understandable and the Hogs have suffered their fair share of those in the last five games. What’s more concerning is how bad the Hogs have become at converting layups around the basket. This year, Arkansas is shooting of just under 45% on layups compared to the SEC average of around 58%, HawgBeat.com’s Andrew Hutchinson said on the “Locked on Razorbacks” podcast with John Nabors.

This inability to finish in part arises from the overall lack of confidence that the team is playing with right now. That’s abysmal layup percentage owes some to all the misses that Vanover and Sills had at the rim in the Missouri loss, but another factor here is lack of athleticism.

Vanover isn’t going to dunk over people, nor is Vance Jackson or Jalen Tate. Nor, for that matter, is Arkansas’ best player Moses Moody. While Moody is good to great in a lot of facets of the offensive game, he is currently struggling with something a lot of freshmen struggle with — consistently finishing at the rim against stronger, heavier opponents who are three or four years older.

Justin Smith, who is exactly the kind of finisher the Hogs need, missed four games but played 18 minutes against Alabama and totaled five points, one rebound, one assist, one steal and three turnovers.

In Smith’s first game back from knee surgery, Eric Musselman said Smith had “a warmup game” in which he was “just trying to find some rhythm.”

“I think he’ll get a little more rhythm Wednesday” in Arkansas-Auburn, Musselman added on the “Eric Musselman Live” radio show. “And then I’m hopeful by Saturday, he’ll be kind of back where he was.”

Smith, a graduate transfer from Indiana, is one of 10 new Razorbacks who have gotten major minutes so far this season. Four of them are true freshmen, while six are transfers in their first or second year with the program.

All the turnover has led to a lack of player leadership.

In past seasons as a head coach, Musselman developed leadership on teams with many new faces through team bonding activities. The COVID-19 pandemic prevented that from happening in 2020.

“We’re in a different landscape that nobody outside of being in a team sport right now would understand,” he said. “We have lost all of our team bonding stuff that you do to form a leader.”

Desi Sills, a junior, was fulfilling some of that role early in the season but he needs to pull out of the playing funk he’s in now to return to that role in the thick of the SEC schedule.

So who will step up?

Justin Smith took the role naturally earlier and could return to it again soon.

“It’s hard for Justin because he was out with an injury and now he’s thrust back into it. But certainly he’s a guy that leads by example. He does all the little things. He’s a great ball mover for us. He’s our best defender, our best offensive rebounder. And so we certainly need him to lead us as much as he possibly can, both off the court, through his actions, but also verbally.”

Another possibility to fill the void is leading scorer Moses Moody. Perhaps the only silver lining from the Alabama game was Moody assuming the role of alpha scorer. If he could maintain that level of play, and get help going forward, then the Hogs should thrive.

Musselman likes that Moody is still playing with confidence and thinks the fact he’s a true freshman shouldn’t prevent him from leading. Just like it hasn’t prevented Auburn point guard Sharife Cooper.

Cooper “is a leader and he’s only played three games. He’s taken the team. He’s directing traffic. He’s a coach on the floor. And so that’s some of the things that we continue to try to encourage all of our players — to get out of your comfort zone because it’s not comfortable. Sometimes to be a vocal leader doesn’t come naturally. But I think that we will eventually get there.”

Whoever emerges (or reemerges) in the coming games as a leader, that player is going to need to encourage his teammates in two ways:

Time To Dust Off the Zone?

Eric Musselman added that in last few games they have played defense in a pretty standard way and haven’t mixed it up, but may need to mix it up and try some unorthodox tactics going forward. While such tactics can occasionally backfire, he said, they sometimes can work.

As an example of success, he recalled a March night in 1991 when he was a young assistant with the Minnesota Timberwolves under his father, head coach Bill Musselman. The young Timberwolves were squaring off against the powerful Los Angeles Lakers, led by Magic Johnson.

In the teams’ previous two games that season, Johnson had done damage down low against the Timberwolves’ smaller guards. To prevent that from happening again, Bill Musselman decided to use their lumbering 7’3” center, Randy Breuer, to guard Johnson. Eric Musselman recalled the calculated risk paying off, leading Magic Johnson to jack up a bunch of missed threes and the cellar-dweller Timberwolves ultimately winning.

It’s unclear which game, however, Musselman recalled.
Minnesota lost three of its four games to the Lakers that season, but Breuer didn’t play in that one win. It’s likely he was used against Johnson in one of the three losses that season.

However, it may be worth taking a strong look at playing a zone defense with Vanover as the anchor down low. Mike Anderson employed such defensive zones to moderate success in his last few seasons in Fayetteville.

Keeping forward, finding ways to keep Vanover on the floor will be vital for the Hogs’ ability to score enough points to hang with better SEC teams. A healthy Justin Smith who can slide over and protect the rim when Vanover’s lack of quickness allows for penetration will go a long ways toward that end.

Make sure to listen to Nabors’ and Hutchinson’s insight in the podcast below:

EPISODE 332: What is wrong with the Razorback Basketball team & how can it be fixed?@NWAHutch gives his thoughts on the Hogs going foward