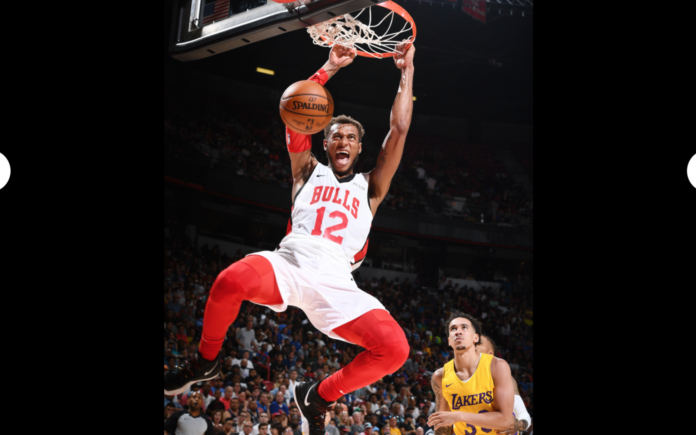 Recently, former Razorback Daniel Gafford has taken his game — and his business savvy — to the next level.

Since he left Fayetteville, the Bulls rookie has added about five inches to his vertical jump, from 31.8 inches at the end of his sophomore season to 36.5 inches now.

All the training “shot me through the roof,” Gafford told Darnell Mayberry of The Athletic. “I mean, I was already jumping through the roof. But it shot me a little bit higher than I was expecting. I just used it, and I ran with it. I’ve got a God-given talent, so I just decided to use it.”

Gafford highlights those hops on one design of the line of personalized men, women and child hoodies and shirts he sells through his new online store. Below is a DanGafford12.com original, via Amazon.com:

And here’s another fun design:

The cartoon is appropriate, because so far in the NBA preseason Daniel Gafford has been playing with the physicality of a superhero.

In two games, he’s averaging 15 minutes, shooting 50% from the field, 83% on free throws and throwing down filthy highlight reels like the following:

Gafford’s most impressive dunk so far, however, came against a fellow Arkansas native. In the below clip, he grabs a pass from Bulls guard Denzel Valentine and flushes it with impunity on the head of Jahlil Okafor, the one-time, all-everything center from the Fort Smith area.

Okafor grew up in the Fort Smith area* but around fourth grade moved to Chicago, where he emerged as the most hyped prep basketball Arkansas native since Corliss Williamson.

He went on to play for Duke, win ACC Player of the Year, help lead the Blue Devils to the national title and get selected No. 3 in the 2015 NBA Draft.

Since then, it’s pretty much been downhill for Okafor. He now looks like an old man compared to Gafford, the uber-athletic El Dorado native who makes Razorback fans everywhere proud.

The biggest hole in Gafford’s game is the same hole that kept him from going in the first round: a lack of a go-to move and perimeter shooting. It’s why the fancy computers at ESPN’s Five Thirty Eight rank him as the Bulls’ worst offensive player with a -2.9 offensive rating:

Among Bulls insiders, there’s a huge debate as to whether Gafford would be better served starting the regular season as a backup for the Bulls or playing 35 minutes a game for Chicago’s G-League affiliate Windy City.

Currently, starting big Wendell Carter, Jr. is injured but when he comes back he’ll take away minutes at that position. The biggest question is whether Gafford should play over the Bulls’ other young big Luke Kornet.

Listen to the raging controversy, in which Gafford is compared to a young Tyson Chandler, at the 4:20 mark below:

Daniel Gafford knows what he needs to work on to become a more complete player with a skill set that will push him toward stardom. In the meantime, he’s just fine making folks shake their heads in amazement. Based on the early returns (more below), he’s well on the path to ranking with Scottie Pippen as the sickest NBA Arkansan dunker of all time.

*Okafor was born in Moffett, Okla. right across the Arkansas River from Ft. Smith but spent much of his time playing basketball as a youth in Arkansas. (He teamed with the Lee brothers of Clarksville on an AAU team named after Nolan Richardson.)

The below article about Gafford’s earthquake-filled summer was published in July 11, 2019.

Before all that, though, Daniel Gafford delivered tremors of his own, racking up 21 points, 10 rebounds and four blocks. Three games later, he’s still doing major damage in the Summer League, proving to be one of the biggest surprises out of the 2019 rookie class so far.

Heading into Wednesday night’s game against New Orleans, Gafford led the Summer League in blocks per game (3.3) and in the final two minutes of a close game he produced this jaw-dropper:

The Bulls ended up winning the game, with Gafford putting up 20 points, 10 rebounds, one steal and one most unfriendly rejection at the rim.

In all, through four summer league games, Daniel Gafford is second on his team in points (13.8 per game) and first in rebounds (9.0 a game). Just as he did at Arkansas, he’s shooting well (64%). Check out these vintage Gafford slams below:

He’s proving more than worthy of the four-year, $6.1 million deal he signed with the Bulls earlier this week. No doubt, Gafford intends to make much more than this for his second contract.

Consider that Clint Capela, the NBA player to whom he’s most often compared, is playing on a 5-year, $90 million contract. The key for Gafford to become one of the highest-paid second round picks of all time will be his ability to expand his game away from the basket.

He must develop his shooting range from farther out than the restricted area by the basket, where the overwhelming majority of his shots come from. Last year, as a Razorback, Gafford was 9 of 19 on shots in the paint that weren’t around the basket. Outside the paint, Gafford was 3 of 18 and he didn’t try a 3-pointer.

“He doesn’t need to become a midrange shooter in the mold of Taj Gibson or even sprinkle in 3-pointers in the mold of Myles Turner,” writes Mark Strotman of NBC Sports. “But he’ll need to be more than a player who feasts on rolls to the basket and cleaning up offensive rebounds. Those won’t come as easily in the NBA as they did at Arkansas and have in Las Vegas.

Strotman also points out that while Gafford is an elite rim protector, he’s not yet the premier defender he needs to be. Last year at Arkansas, for instance, opponents shot 27 of 70 (38.5%) from beyond the arc with Gafford as the main defender.

“Whether it’s defending stretch bigs on pick-and-pops or being switched on to guards in pick-and-roll action, Gafford will need to improve as a perimeter defender. He flashed a little bit of that on Monday night, blocking a Nickeil Alexander-Walker jumper on the left baseline in the first quarter.”

Daniel Gafford has started his pro career as well as anybody could imagine. To take that proverbial next step, and produce like the lottery pick he could have been, he’ll have to work harder than ever on honing his perimeter shot and lateral quickness.

In his Summer League debut, Gafford rocked the Los Angeles Lakers. In a 96-76 win, he led his Chicago Bulls with 21 points, 10 rebounds and four blocks, showing a national audience what Razorback fans already knew: a keyed-in Gafford attacks the rim like a force of nature. And few defenders, at any level, can do anything about it.

The proof’s in the pounding:

Folks, this is just the start of it. To see the full glory of Gafford, watch below:

After the game, Chicago point guard Coby White said of Gafford, who hit nine of 10 shots: “He’s a monster.” In the post game interviews, Gafford said he didn’t even notice that LeBron James was watching courtside.

Though James likely most wanted to see overall No. 1 pick Zion Williamson play in the next game (which was postponed in the fourth quarter due to the Southern California earthquake), it was Daniel Gafford who delivered the most impressive opening night among NBA rookies.

“My athleticism is crazy even to me because sometimes I do stuff that can surprise myself,” Gafford said. “They asked me to bring energy, go grab rebounds, set a lot of screens and get a lot of dunks.”

It’s the kind of game that former Chicago Bull Bobby Portis, also an Arkansas product, has seen in Gafford for years. Gafford, three and a half years younger than Portis, grew up looking up to the 6’11” big man out of Little Rock.

The Chicago Bulls knew exactly what they were getting when they drafted Daniel Gafford in the second round of last month’s NBA Draft. They were getting a rim-running big man with jaw dropping athleticism, go-go gadget length, molten ferocity and, yes, limited shooting range.

It was that last limitation which caused Gafford’s draft stock to drop despite increasing his numbers across the board during his sophomore season at Arkansas. “Mainly, I would put that on me. I could have come out that first year; I could have been a first-round pick,” he told the Chicago Sun-Times.

He added: “I decided to [go back to school] to get that year under my belt, so I could be able to withstand this process. Because if I would have come out my freshman year, this process would have ate me up, and I didn’t want that to happen.’’

‘[The] 38th pick really wasn’t where I was trying to be, but [the Bulls] put their trust in me to be able to come to the program and come in and be ready to work and do good things here.”

Already, Gafford’s hard work in the pros has paid off. This weekend, he agreed to a four-year, $6.1 million rookie deal, with two guaranteed seasons, according to Shams Charania of The Athletic NBA.

Razorback fans and Bulls fans alike are hopeful that Gafford will continue to build on his stellar debut.

If anything, they can take solace in the coincidental aftershocks of their draft and how it echoes the legendary Bulls tandem of Scottie Pippen and Michael Jordan. Gafford, an El Dorado native, is the Bulls’ first south central Arkansas rookie since Pippen, a Hamburg native.

His rookie teammate Coby White (the No. 7 overall pick in the 2019 NBA Draft) is the first Tarheel drafted by the Bulls in the first round since Jordan.