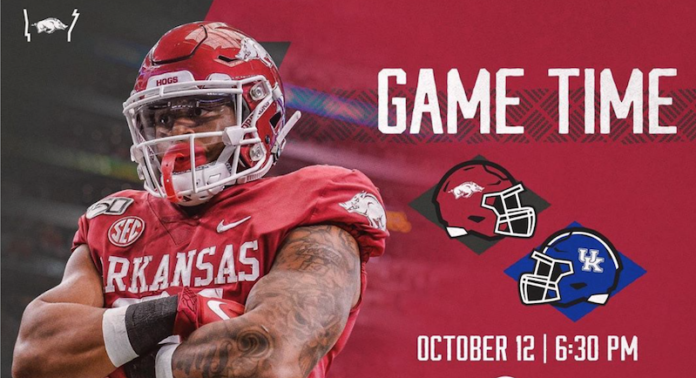 Twenty quarters of football are in the books for the 2019 Arkansas Razorbacks. Their record stands at 2-3 with victories over Portland State and Colorado State. Before the year, many fans would have scoffed at the idea of a San Jose State loss, paired with two conference losses, heading into the first game in October. Unfortunately, that’s where we stand.

All the same, Hogs coach Chad Morris has an excellent opportunity to defeat a Power Five opponent for the first time in his head coaching career this weekend. There’s just one thing standing in his way: the Kentucky Wildcats.

After Arkansas’ inspired showing against Texas A&M, many in Razorback nation still believe in the Hogs this week. Though Kentucky is listed as a touchdown favorite on most betting sites, there are many reasons to be optimistic. To start, the most important position on the field — quarterback — is a bit cloudy for the Wildcats.

Th 2018 starter Terry ‘Touchdown” Wilson returned for this season and was doing just fine, until a Florida player awkwardly dragged him down in game three, resulting in a torn ACL. The next man up was former Troy Trojan Sawyer Smith. The transfer ended up starting the last two games in the blue and white. In his most recent performance against South Carolina, Smith posted an ugly quarterback rating of 3.6 (out of 100).

Wondering to manage that feat? Easy: Throw 32 passes while only completing 11 to your team and one to the other team, for a grand total of 90 yards. Not an ideal home conference debut for the junior gunslinger. On top of that, Smith is battling shoulder and wrist injuries, which kept him out of drills all last week.

“This week, ProFootballFocus.com ranked Smith as the worst of 130 FBS starting quarterbacks through six weeks. The website’s grading metrics credit Smith for 18 turnover-worthy passes, a statistic that describes passes with a higher percentage chance of being interception. No quarterback in the country has thrown more.”

Should Smith sit against Arkansas, look for star receiver Lynn Bowden to man the quarterback position against the Hogs. In fact, Bowden spent the bye week as QB 1. He rushed for 44 yards on six carries while completing both his passes for seven yards against South Carolina. A former star quarterback during his high school days in Ohio, Bowden is no stranger to the pressure of the position. Kentucky head coach Mark Stoops has opened up the idea of running “the wildcat” if Smith is a no go. One word Coach Morris used often to describe the potential All-American was “electric.” “Electric” may be an understatement once you see this kid in action.

On the flip side, the Razorbacks are the healthiest they’ve been all season, especially in the receiving corps. Trey Knox (hip), Jordan Jones (ankle), and De’Vion Warren (concussion) will all be available to play. On the defensive front, freshmen Zach Williams will be healthy, and Mataio Soli will get his cast off after having a fracture on his left hand since the start of the year. Defensive coordinator John Chavis will have his hands full with game planning for multiple quarterbacks, along with other wrinkles the Cats added in during their bye week.

I expect a low scoring game, regardless of who plays quarterback for Kentucky. Without a doubt, Bowden will take some snaps behind center. The question is: How many? Kentucky’s Benny Snell-less offense has mustered 41 points over the last three games, which have all also resulted in losses. Trying to predict this game is tough since you don’t know if you will see the San Jose State Hogs or the Texas A&M Hogs. Even with his recent struggles to take care of the pigskin, Nick Starkel will be under center for Arkansas. He gives this team the best chance to win.

As tough as things may seem right now for Arkansas, I still believe Chad Morris has this team trending upwards from last year, just by a nose. However, as I see it, the streak of straight conference losses will reach 14(!).

UK head coach Mark Stoops will pull out tricks aplenty with Lynn Bowden, while the young defensive ends of Arkansas struggle to contain him. Starkel will drive down the field late in the 4th to put Limpert in field goal range to win the game, which leads to a doink off the right upright as time expires. The fans at Kroger Field will breath a sigh of relief as they win 23-21 on Jared Lorenzen memorial day. Then, a daunting matchup awaits in Fayetteville as Gus Malzahn and the Auburn Tigers come to town on fresh legs following a bye week.