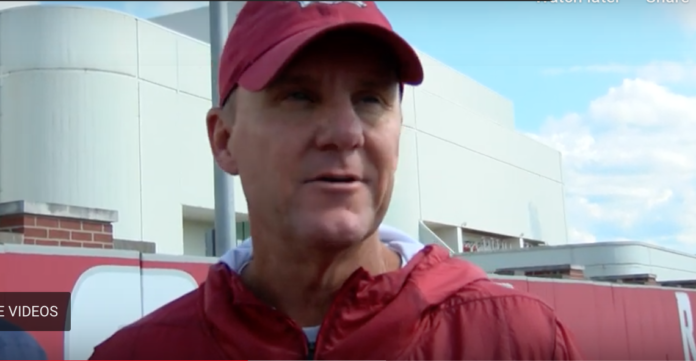 Only days before Arkansas’ season opener against Portland State, it seems as if every angle that could be covered about the Razorback football team has been covered.

Fans, players and coaches alike are ready to see the product on the field. “All across the country, people are tired of hitting on each other,” Hogs football coach Chad Morris said. “They’re just ready for a game.”

Today, in his last press conference before the season opener on Saturday, Morris said tight end C.J. O’Grady would be ready to play on Saturday. He also gave updates on the Hogs’ offensive linemen and some of the most talented Razorback freshmen.

The No. 1 question was the status of presumed starter Trey Knox, the true freshman who has been out of with an undisclosed illness since early last week. Knox did not practice today, Morris said.

Here are other excerpts before the Arkansas-Portland State showdown:

“A lot of it depends on where CJ is and how many reps he gets, but we anticipate him getting some reps here on Saturday.”

“I don’t recall I have [ever used a true freshman at that position]. It’s a trust position and this young man’s got an opportunity to be really special. I think he’s earned that, and we’ve got the utmost trust in Treylon. He’s a fantastic individual. He’s a better person than he is a football player and I can tell you that’s a credit to his family, to his coach [Warren High coach Bo Hembree] and I have no problem with him back there — as long as he can catch it.”

“Oh yeah, stuff like that is hard not to be aware of. We just ask him to go off and get away from everybody else when he does it, you know? He does it before practice, too. It’s just part of it.”

“I’m really pleased with Eric right now, where he is. I think he’s well ahead of schedule. I don’t know if we’ll see him or not on Saturday, but he’s definitely going to be in the mix before it’s over.”

On Dalton Wagner, the youngest starter on the offensive line:

Dalton’s continued to grow, mature and develop. He’s really taken his coaching extremely well and he’s learning on the run. I think Dalton’s gonna be a guy who will help us out. He’ll have to.

“I just want to see us play fast, play physical and play to our standard. We’ve got to be able to run the football, we know that. We’e also got to be able to win first and second down, that’s my biggest emphasis to those guys.”

Listen to the entire press conference, including a section at the end about social ice cream eating, here: