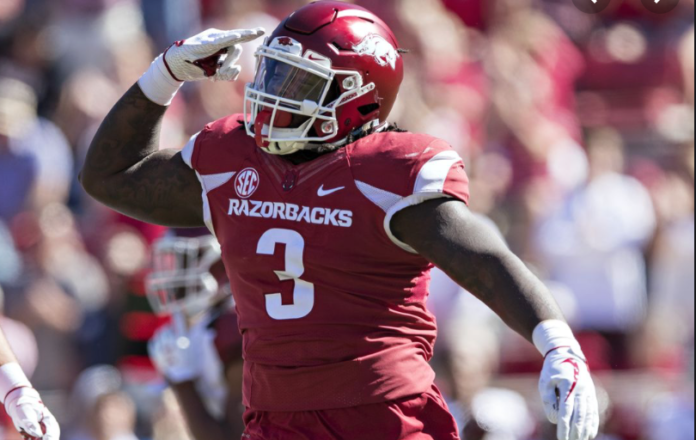 Based on the early returns, there is plenty to be concerned about when it comes to the Razorback football team this season. The offensive line looks out of sorts, not quite the well-oiled machine needed to help make Chad Morris’ system hum.

Quarterbacks Ben Hicks and Nick Starkel, too, are works in progress.

But the Hogs defense, outside of one fourth quarter meltdown, looks good. They are gaining confidence in defensive coordinator John Chavis’ aggressive 4-3 schemes, and it showed in the 20-13 season opening win against Portland State on Saturday.

Arkansas racked up three interceptions and six sacks. That’s the most sacks in a Hogs season opener since 2002, when the Razorbacks totaled seven against Boise State in the first season of the Dave Wommack era.

McTelvin Agim and Kamren Curl led the effort with two sacks apiece. That’s the first time two Razorbacks piled up that many in a single game since September 6, 2014, when Taiwan Johnson had 2.5 and Darius Philon had 1.5 sacks.

““Basically, just running to the ball, relentless effort,” Agim said afterward, when discussing the gameplan. “That’s what (Coach Chavis) tries to preach all the time. Just relentless effort, getting to the ball, full tilt. That was what I was trying to do. Sometimes you are going to miss tackles. You can’t rely on your teammates to just make tackles all the time. Sometimes you just got to make sure he’s down, so that’s basically what we were doing.”

Hogs linebacker De’Jon Harris, who led the SEC in tackles last year and had three against Portland State, said: “ I think we played really well. That’s something we emphasize as a defense. We try to create turnovers. We feel like we can change the game. We didn’t really do that much today. We tried to keep it simple. I feel like the team expected us to do that and that was good for us.”

Here are some other excerpts from star Razorback defensive lineman McTelvin Agim:

On if it was a tougher game than anticipated…

“I honestly didn’t even know we were favored by four touchdowns. The only thing our coaches tried to preach to us was that we were going to get there best shot, that these guys were very con dent coming in and that these guys could play. They’ve played big games already, so we understood that they were coming in here like this was there super bowl. We were going to get their best shot. We were just trying to counter, and make sure we got through the punches.”

On the defense’s mindset on the nal drive…

“Get a turnover and get down. That basically was the thought going through our mind. Get pressure on the quarterback. We knew they were going to throw the ball. Basically, get pressure on him, try to contain him, let him try to throw a ball and hopefully get a turnover like we did.”

Here are some other fun factoids about the defensive players:

• It’s the first multi-sack performance by a Razorback since McTelvin Agim totaled 2.0 against Tulsa in 2018.

.• Is the first Razorback with a sack and an interception in the same game since Alonzo Highsmith (1-and-1) against South Carolina in 2011.

Below is HawgSport’s Trey Biddy on the major takeaways from the Hogs’ disappointing offensive performance:

Now attention pivots to the Hogs’ next opponent Ole Miss, which lost 10-15 to Memphis and — according to one semi-sketchy Twitter source — may be in the throes of dysfunctional infighting.

“We will get an early jump on those guys tomorrow and put this feeling behind us,” De’Jon Harris said. “I mean, it’s the SEC opener so it’s a big game anyways. I feel we just can’t go down there like we did a few years ago and get down 30. We just have to start off fast. I think it will be pretty fun against those guys”.