Best Out-of-Staters to Play For an Arkansas Baseball Team

Jim Bunning1 Ray Lankford1 Tris Speaker1
Arkansas has been home to quite a few all-world caliber baseball players who swoop into the state for a year or two before jumping...

Arkansas has been home to quite a few all-world caliber baseball players who swoop into the state for a year or two before jumping off to far bigger stages – and achievements – in the major leagues.

Without a doubt, Mike Trout is the  poster boy for this kind of star in the 21st century. Big boy starred with the Arkansas Travelers in 2011 before breaking out as an All-Star rookie outfielder with the Los Angeles Angels last season.

A hundred years before Trout, the 5’7″, 150-pound pitcher Dickey Kerr was tearing it up in Paragould in the ol’ Northeast Arkansas League. His ascent into major league stardom wasn’t as fast as Trout’s, but at one point in the 1919 World Series Kerr was the most celebrated athlete in the United States. His unstained hands during the biggest scandal in baseball history would make him an even more revered figure.

Who, though, were the best non-Arkies* to play with an Arkansas team besides Kerr and Trout?

After conferring with sportswriters Jim Harris and Jeff Reed, as well as the Arkansas Baseball Encyclopedia‘s Caleb Hardwick, here are some top candidates, in no particular order:

*Although Bill Dickey was born in Louisiana, I consider him an Arkie. 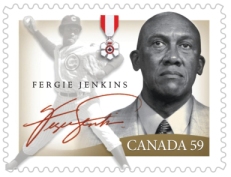 Played in Arkansas 1963, 64, 65 before heading to Philadelphia, Chicago, Texas and Boston. A three-time All-Star and the 1971 Cy Young Award winner. In 1991, Jenkins became the first Canadian to be inducted into the National Baseball Hall of Fame and Museum.

Played in Arkansas in 1989 before heading to St. Louis for a 14-year career with the Cardinals. A one-time All-Star, Lankford posted five seasons of 20 home runs and 20 stolen bases with the Cardinals (1992, 1995-1998) – the only player in franchise history to accomplish the feat more than once, according to Wikipedia.

Allen smoked some comp, too.

Played in Arkansas in 1908 a year after making his major league debut for the Red Sox.

“Compiled a career batting average of .345 (sixth all-time), and still holds the record of 792 career doubles. Defensively, his career records for assists, double plays, and unassisted double plays by an outfielder still stand,” says Wikipedia. Was a three-time World Series champion with Boston (as a player) and Cleveland (as a manager).

What, you’ve never been elected to the U.S. Senate?! Strike – you’re out, indeed.

Played in Arkansas in 1953 and 1954 before a 16-year career in the majors, most notably with Detroit and Philadelphia. A nine-time All-Star, he pitched one of only 23 perfect games in major league history.

Bunning was twice the AL’s strikeout champ. He entered politics after retiring.

N.B. There are some other names to consider, especially from earlier eras. As Caleb Hardwick writes: “During a period of about 1920-1950, Arkansas only had low minor league teams, and they rarely produced big league stars. Little Rock had a few, such as Eddie Lopat (1943-1944).
However, during the Deadball Era (roughly anything before 1920), Arkansas teams produced a lot of talent. These players include Tommy Corcoran (Little Rock, 1886, semi-pro), Joe McGinnity (Van Buren, 1882, semi-pro), Pink Hawley (Fort Smith, 1892, semi-pro) …  Hippo Vaughan (Hot Springs, 1908), and of course Kerr.”
Facebook Comments