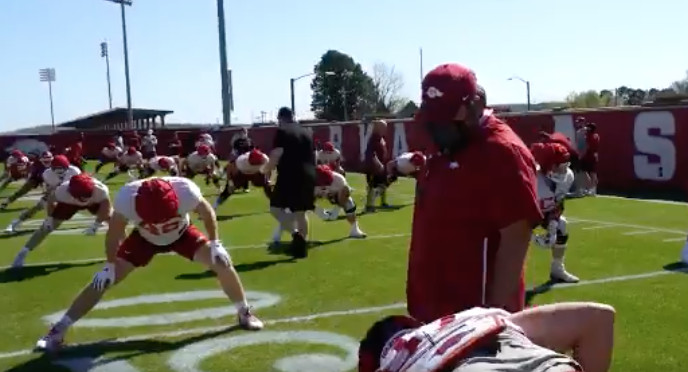 “They want certain players to look good to the fans. Let’s get real. It’s a PR thing.” Just as it’s a PR stunt in the Big Ten for certain athletic departments, like the Terrapins, to act like their football teams have an actual shot at winning a conference title according to Maryland sports betting.

“You don’t want to have a spring game and everybody walks away going, ‘Man, they stink.'”

Most years, this “scripting” involves making sure the first teamers on offense and defense don’t square off against each other. “You’re not going to line up your best players and put them in a bad position so they’ll look bad.”

This year’s Arkansas spring game, however, should be more competitive than usual.

Arkansas football head coach Sam Pittman is going to allow his best players to square off against each other in Saturday afternoon’s two-hour scrimmage.

“I don’t know how we’re going to continue to get better if we don’t go good on good, so we’ll go ones vs. ones,” Pittman recently said.

Here are some of the standouts whom fans can expect to see:

“We anticipate somewhere around 50-55 plays on both sides of the ball, not counting special teams,” Pittman added. The four-quarter game will be played with a running clock – stopping on scoring plays, penalties, change of possession and the final four minutes of each half.

Regardless of how competitive the Arkansas spring game turns out to be, don’t expect the Arkansas football coaches to tip their hand schematically and show opponents the exact packages they plan to run come fall.

For fans, it’s more important to see that the Razorbacks, on the whole, look bigger, stronger and faster, as 247Sports’ Josh Pate points out in his Arkansas spring game preview here:

The Arkansas football team should be deeper and more physically developed in 2021 because of going through another year in Pittman’s system and the strength training of his staff.

“Based on current heights and weights of the current starters, the starting offensive line could average 6-foot-6, 319 pounds per man in 2021,” HawgSports.com’s Trey Biddy wrote. “That’s plus-28 pounds for each player and 140 pounds total from the line that averaged 291 pounds as recently as 2019.”

An even bigger reason for the expected increase in size: a vast number of 2020 starters are coming back for a second senior year.

Sam Pittman was able to convince 2020 seniors like Morgan, Blake Kern, De’Vion Warren, Myron Cunningham, come back to campus for another year, which says a lot about his overall recruiting ability. Their contributions in 2020 will be vital in determining whether Arkansas football will win only four or five games and prove to be as relevant in the SEC.

Or whether they will shock the world by more than doubling up on the three games they won during the conference-only 2020 season.

NB: Arkansas will play its spring game on its campus for just the second time since 2016.

How To Watch/Listen to Arkansas Spring Game

Arkansas Spring Game on TV: It will be streamed by SEC Network +. Get it through WatchESPN.com and the ESPN app (carrier login required).

Just get your ticket online here. Make sure you have downloaded your mobile tickets to your phone because you will need to scan into the game. Click here to download it and add to your mobile wallet.

Parking: Fans can park in any university parking lot west of Razorback Rd. and Lot 44 north of the stadium. ADA parking is available in Lot 44, enter from Razorback Rd.

Make sure to note that University of Arkansas’ mask/face covering policy is still in effect for the Arkansas spring game. Fans must be wearing a mask or face covering to enter the stadium

Also note there will be no cash transactions on Saturday. All concessions purchases will have to be made electronically. No outside food or drinks are permitted.