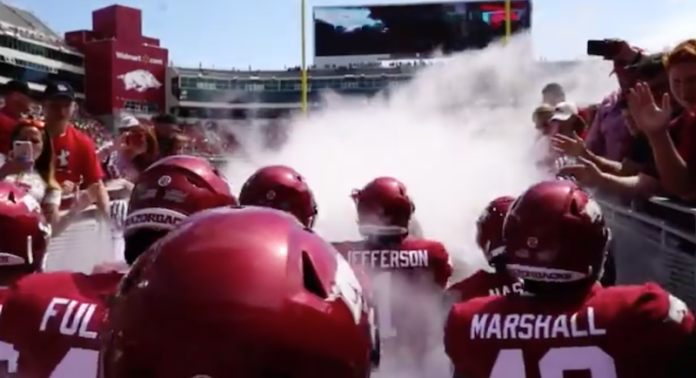 The NCAA football 2019 season is off to a great start, with big-time intraconference games involving SEC squads such as LSU-Texas, Auburn-Arizona and Texas A&M-Clemson in the books. Arkansas doesn’t play an intraconference game with national implications this weekend, but its showdown with Colorado State is still hugely important for the Razorback program.

The game, pitting the Razorbacks against the Rams of the Mountain West Conference, takes place at Donald W. Reynolds Stadium in Fayetteville at 3 p.m. today.

The Razorbacks are 10.5 point favorites and hold the 3-1 record in the all-time series, but Hog fans know well what happened last year: a 34-27 home victory for Colorado State.

Here’s a look at how each team has done so far this season, and how they match up in Week 3:

Razorbacks Need a Bounce Back

Yes, the Hogs beat the Portland State Vikings in their season opener, but the following week was a massive letdown. Offensive dysfunction paved the path to a depressing 31-17 loss on the road to the Ole Miss Rebels last week.

Under the previous starter Ben Hicks, Arkansas couldn’t generate enough offense to win games against elite competition. The lack of passing offense (and way-too liberal use of the “Wildhog” formation) stifled the running game, too. And plays out of the shotgun formation usually took way too long to develop.

Still, there’s hope. The offensive line, center Ty Clary in particular, is gelling. Most importantly, Nick Starkel — a proven performer at the SEC level — has taken over the starting position from Ben Hicks.  Against Ole Miss, Starkel provided a spark of hope by throwing for more than 200 yards and a touchdown (another was called back) in the second half alone.

The Arkansas defense played strongly throughout the first half, and defensive back Kam Curl’s scoop and score early in the second was impressive. But the lack of defensive depth ultimately hurt as defenders starting missing way too many tackles toward the end of the game.

The more the Arkansas offense can sustain drives, the more the defense can rest. Under Starkel, the offense will focus on more accurate, mid-range throws mixed in with a few deep bombs to set up the ground game. It will probably commit more turnovers, but that’s risk in airing out the ball more often. Still, expect the Hogs to notch a home win, so long as Razorbacks can keep the focus throughout the entire game and not implode when a few things go wrong.

Losing at the end of August to their in-state rival Colorado Buffalos 52-31, Colorado State bounced back in their last game with an impressive 38-13 victory over the Western Illinois Leathernecks.  The Rams offense got out to a 14-3 lead, and never let West Illinois get any closer than 8 points the whole game. Hill is fifth in the nation in total passing yards (741) after a 367-yard, four-touchdown performance against the Leathernecks.

Obviously the Rams will try to build on this momentum and look for their second straight win by scoring a road upset win that would put more heat on Hogs coach Chad Morris’ job security this early in his second season.

With its improved defense, Arkansas should be able to take advantage of Colorado State’s habit of turning the ball over a lot.

In terms of team statistics, in this season things look a lot better for the Rams. Still, this is only the start, and a two-game sample size doesn’t make the best predictor for future performance.

Points per game averages are 34.5 for Colorado and 18.5 for Arkansas.

So, the ratio between offense and defense rankings between the two teams is almost inverse. Neither squad is elite when it comes to the top college football rankings, but reaching the heights of a Clemson or LSU isn’t a realistic goal for either program this year.

Six wins and a bowl appearance would be a huge step forward for either team, especially the Hogs. Without beating Colorado State, a path to that goal looks treacherous at best.