Search
Home Arkansas Football Perspective Ranking 23 U.S. Presidents By How the Razorbacks Performed During Their Administrations 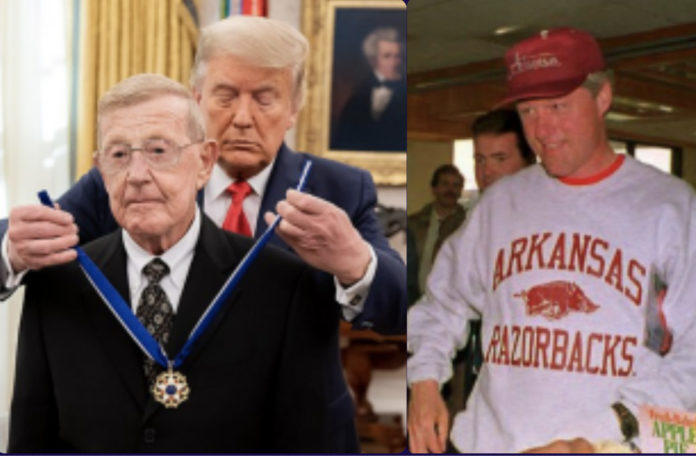 Early this morning, night owls and insomniacs across the U.S. saw the last full lunar eclipse until 2025. There is not a shred of scientific evidence that the “blood moon” has any direct influence on fates of mere humans, but that hasn’t stopped mankind through the millenia from believing such an eclipse portends the overthrowing of a king (watch out, Sam Pittman?) and signifies revelations, signs and whatever else astrological people are into.

It just so happened that this rare natural phenomenon went down on the biannual Election Day, a time heralding in with the new and out with old across this great nation of ours. While the U.S. presidential election is still a couple years away, every midterm election year plays a huge role in how effective each president will be in his/her last two years. There’s about as little evidence that election results influence the success of the Arkansas football program as lunar eclipses affect world events, but that shouldn’t stop us from having a little fun nonetheless.

In what presidents’ terms have the Razorbacks had the highest winning percentage since the program started in 1894? Lowest? And, overall, how have the Hogs performed under Democrats vs Republicans?

Below are the answers to all the questions you never knew you wanted to ask:

Let’s start with the lowest and slowly climb our way into the light.

It’s no surprise that the Hogs performed worst under Donald Trump given his administration coincided with the Chad Morris years. The last year of Bielema and all-SEC slate at the start of Pittman’s tenure helps Trump take the cake here.

It’s a testament to how tough the SEC has been that the Razorbacks essentially hovered close to .500 during the entire stretch from the early 1990s until Obama left office in January 2017. Clinton, of course, is the state’s only native son to become president and attended plenty of Razorback sports events as a law professor at the University of Arkansas and later governor of Arkansas.

He also had a more direct tie to the Arkansas football program, as you can see in the statement Clinton released in the aftermath of former Razorback athletic director Frank Broyles’ passing in 2017:

I got to know Frank Broyles well in late 1977, his first year as athletic director for the University of Arkansas and my first year as attorney general, when I represented him and Coach Holtz in the well-known and controversial Orange Bowl case which culminated in one of the greatest victories in Arkansas football history.

I worked with him throughout my tenure as governor, and we kept in touch afterward.  He was a leader of character, intelligence, and determination, and on his watch Arkansas became a leader in many sports. A big part of his legacy came later in his efforts to find a cure for Alzheimer’s and his support for families struggling with it, including his work with the US Senate special committee on Alzheimer’s which Hillary helped to form. I’ll always be grateful to have known him and called him my friend.

While Bill Clinton would later become known nationally as more of a basketball fan, he’s always supported the football Hogs. In 2012, four games into the disappointing John L. Smith year, he even gave his take on the state of the program: “They’ve got a great quarterback and three receivers and nobody else is playing really well,” he told MSNBC. “They have two great, really good, running backs and they are not doing so great this year. So, it looks like — to me — like a line problem.”

Sounds a bit familiar, actually, after what happened to Arkansas against Liberty.

Ah, the circularity of time. Starting in the mid 1950s, Eisenhower oversaw the return of Southwest Conference dominance from the Razorbacks after decades of wandering in the desert. The main driver there was the 1958 arrival of an ambitious young Georgian by way of Missouri who would end up as the most accomplished Arkansas football coach of all time in Frank Broyles.

There were also high hopes of a return to glory under Sam Pittman, who led Arkansas to its best season in a decade in Joe Biden’s first full year in 2021. Four losses this season have taken some of the luster off the talk of Pittman as a second coming of Broyles, but there is still time to right the ship in the next three games.

This was mostly in the era of Francis Schmidt, a lawyer who led the Razorbacks to consistent success with what was then considered a razzle-dazzle offense. No, those 1920s Hogs could never get over the Texas hump and win a SWC conference title. But at least they got to tell stories about a man who also coached Razorback basketball and baseball and years later, at Ohio State, would reportedly coin the phrase “Those fellows put their pants on one leg at a time, the same as everyone else.”

Reagan, who was president from the 1981 college football season through 1988 season, saw Arkansas mostly thrive under Ken Hatfield, whose 76% winning percentage is the highest of any Arkansas football coaches. Hatfield’s last two teams won the SWC championship.

Carter got the benefit of seeing Lou Holtz (who has had quite the bromance with Donald Trump) arrive in Fayetteville and lead a ’77 team that is often considered the most talented in Razorback history. But it was Johnson who presided over the prime years of Frank Broyles as coach, including the 1964 national championship and a one-loss team the next year.

So, it turns out, we see some good for both sides. And that, ultimately, is what Election Day is all about.