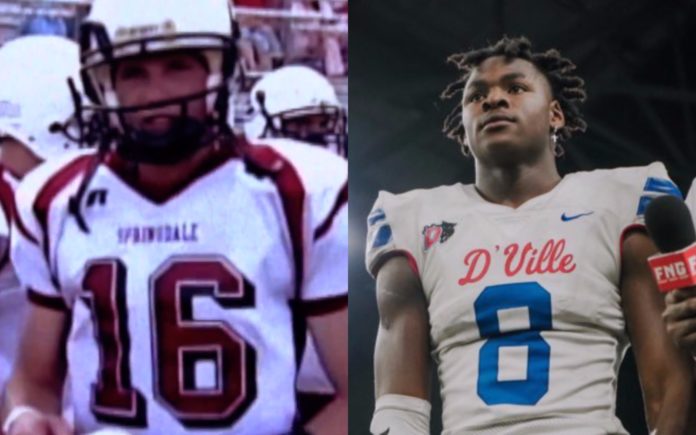 Landing five-star recruits is still rare for the Arkansas football program, but it already has a foot in the door with one of the top players in the 2024 class: Colin Simmons.

Ranked as high as No. 3 nationally by Rivals and a unanimous top-25 prospect, the 6-foot-3, 225-pound defensive end has all the tools to be the next Micah Parsons, the All-Pro for the Dallas Cowboys.

Simmons is from Duncanville, Texas, where he played alongside current Arkansas freshman linebacker Jordan Crook, who has been selling him on the Razorbacks.

Should he join his former teammate in Fayetteville, Simmons would be the highest-rated defensive recruit to come to Arkansas in the modern era and has the skills to become the best NFL prospect the Razorbacks have produced on that side of the ball.

However, that could be all for naught if they don’t land him and a familiar foe is standing in the way.

By now, Arkansas fans are probably very familiar with Duncanville. Colin Simmons hails from the same hometown as Anthony Black, the Razorbacks’ freshman phenom and projected lottery pick in basketball.

A high three-star recruit in the 2022 class, linebacker Jordan Crook was a teammate of Simmons in high school and is now a contributor at Arkansas as a true freshman.

Sam Pittman is now trying to do what Eric Musselman failed to do with Ron Holland and dip into the school for a second heralded prospect.

With a 247Sports Composite rating of 0.9962, Simmons would be second on Arkansas’ all-time recruit list, which goes back to 2000. He’d be behind only quarterback Mitch Mustain, who had a 0.9964 rating in the 2006 class, but ahead of the likes of Ahmad Carroll, Darius Winston, McTelvin Agim and Darren McFadden.

Simmons is considered the top prospect in Texas and top edge rusher in the class, according to the 247Sports Composite, as well. The service also has him at No. 5 overall for the 2024 class.

The Razorbacks got into the Simmons sweepstakes early. Of his 40-plus offers, they were the fifth team to extend one, according to his recruitment timeline on 247Sports, offering him early in his sophomore season. He also attended junior day at Arkansas in March of this year.

His other offers are a who’s who of college football. They include all four College Football Playoff teams (Georgia, Michigan, TCU and Ohio State), 11 of 14 teams (everyone but Kentucky, South Carolina and Vanderbilt) and future SEC members Oklahoma and Texas.

It would be a huge pickup for Arkansas, but one early sign points elsewhere. On 247Sports, Simmons has a crystal ball pick to go to LSU, where he’s unofficially visited twice. He’s also taken a trip to Florida State.

From his college destination Simmons seeks a good atmosphere, which Arkansas can provide in spades.

“I want the energy. I like the energy,” Simmons told Rivals in a second interview over the summer. “I want a good vibe out there and feel like I’m at home.”

He did have some good things to say about the Razorbacks when he visited Fayetteville.

“I had one of the best times at Arkansas,” Simmons told Rivals. “It wasn’t necessarily during the visit. It was outside of the visit that I had a good time. The students there welcomed (me)… treated me like I’m at home. And they were cool, the vibe was there and everything.”

As you would expect with such an elite performer, the film on Simmons is impressive. High school offensive linemen struggle to stay in front of him because of his speed. He is often seen running circles around linemen in pursuit of the quarterback.

He is a play wrecker, whether it be breaking up passes, collecting sacks or blowing up a run play. He is also already good at examining plays and disrupting reads and screens.

Colin Simmons has a similar size and skill set as one of the best defensive players in the world, Dallas Cowboys linebacker Micah Parsons. Simmons’ 247Sports Composite rating is also not far off what Parsons was rated coming out of high school (0.9982), too.

Both players are around 6-foot-3 235 pounds, which is smaller than most players at that position, but their speed and strength make up for any lack of size. Parsons has proven he’s capable of playing all over the field because of his athleticism.

Simmons is starting to experiment with that versatility that makes Parsons so special to see if his game can evolve in the same way.

“I see myself coming off the edge as a true edge player and also me dropping into coverage and doing both in college,” Simmons told Rivals before the fall. “We’re trying to start that now at Duncanville, my upcoming junior year.”

Parsons has taken his game to a new level in the NFL, but the former 12th overall draft pick was very productive in his two-year college career. As a sophomore at Penn State, he recorded 109 tackles, five sacks, five pass deflections and four forced fumbles.

While the players have similar play styles and physical attributes, it would be very hard to recreate the speed of Parsons, who beat the man known as Cheetah, Tyreek Hill, in a 40-yard race at the Pro Bowl in early 2022. However, their similarities are all positive signs given the success Parsons has had in both college and the NFL.

Check out some highlights of Colin Simmons from last year, when he was a sophomore:

What it Would Mean for Arkansas

Bringing in a recruit like Colin Simmons would usher in a new expectation of excellence. As mentioned earlier, he’d be the second-highest rated player to make it to Fayetteville during the modern recruiting rankings era.

A player of this caliber sends a message to the other teams around the SEC that Arkansas is here to compete for the top spot. Simmons is the type of recruit with whom other players want to play, which could help bring in other defensive standouts to the program.

Landing Simmons would be game-changing for the Razorbacks and would help whomever they hire as the next defensive coordinator reach the next level and recruit other top talent.

With Rivals’ top-ranked Alabama prospect, defensive end Kavion Henderson, committing to Arkansas in November, a Simmons commitment would provide the Razorbacks an historically elite duo to wreak havoc on opposing offenses beginning in 2024.

The following is a list of the top Arkansas football commits since 2000, according to the 247Sports Composite…