Arkansas football fans still upset about the loss to Liberty got quite the pick-me-up Sunday afternoon in the form of a commitment by Kavion Henderson, a top-100 recruit in the 2024 class.

The talented defensive end out of Leeds, Ala., picked the Razorbacks from a top five that also featured Alabama, Auburn, Georgia and Oklahoma. All told, he turned down some 40-plus offers, including the likes of LSU, Michigan, Notre Dame, Oregon, Tennessee, Texas A&M and USC.

Considering his accolades and his home state, Henderson may be the biggest recruiting coup of Sam Pittman’s tenure — and one of the Razorbacks’ biggest, period, in the recruiting era. He comes into a position where Arkansas traditionally has a lack of game changers. Arkansas football coaches “think I can come up there and change the game, get the edge position because they’re not known for having a lot of edge guys,” he told ESPN.

“Georgia already got what they want,” he added. “They already have the edge guys. Arkansas, I want to go somewhere to help. I want to help out and I want to build. I want to make an impact, so I think Arkansas was the right place.”

Rivals currently has him listed as the top player in the state of Alabama, a distinction that usually means he’s a lock to sign with the Alabama football program. In fact, out of the 20 classes before 2024, all but four players tabbed No. 1 in the Yellowhammer State chose to stay home with Crimson Tide. Two of those players signed with Georgia and the others signed with Clemson and Florida State — all schools in the thick of the national championship conversation at the time.

Throw in the fact that he lives just an hour away from the University of Alabama and his grandfather his a big Crimson Tide fan, and it seemed as though Henderson was destined to follow suit by staying home when Alabama offered back on Sept. 2.

Even though he was in Fayetteville the next day for an unofficial visit, Henderson replaced Cincinnati with the Crimson Tide in his top five and visited the school a few weeks later, watching them dominate Vanderbilt 55-3. But, in the end, the Sam Pittman effect won out. “It’s been big,” Henderson told ESPN. “(Pittman) is a great guy, down-to-earth guy. He’s cool. He just keeps it real. He’s a funny guy. My first time talking to him, it was just shocking. So me and him have been in touch ever since my first time going down there.”

As for Alabama, Nick Saban might have have thrown his hat into the race too late and couldn’t make up enough ground. Losing out on the No. 1 recruit from the state, combined with Saturday’s close defeat at the hands of LSU, constitutes the kind of double-whammy for the now 7-2 Crimson Tide that has been rare in Saban’s 15 years in Tuscaloosa. 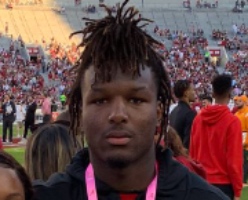 While this is the first time Arkansas football has gone into the Crimson Tide’s backyard and stolen away a top recruit, it didn’t come out of nowhere.

The Razorbacks have steadily developed a strong recruiting presence in Alabama over the past year, resulting in three commitments for the Class of 2023. They landed commitments from cornerback Dallas Young, safety TJ Metcalf and wide receiver Davion Dozier.

Assuming all three actually sign as expected, it will be the first time Arkansas has brought in three players from the Yellowhammer State in the same class since 1996. That class proved to be a productive group: Quinton Caver (Anniston High), running back Chrys Chukwuma (Sidney Lamar High in Montgomery) and linebacker Jamel Harris (Wicksburg High in Newton).

Caver became a first-team All-SEC linebacker in 2000, Chukwuma broke the UA freshman rushing record in 1996 and is still 15th on the school’s all-time rushing list with 2,168 yards, and Harris became the Razorbacks’ second-leading tackler as a senior in 1999.

The 2012 class, when they landed defensive linemen Darius Philon and JaMichael Winston, was the last time the Razorbacks signed multiple players from Alabama. In the decade after that, they signed just three total players from the state: quarterback Daulton Hyatt in 2017, safety Myles Mason in 2018 and running back A’Montae Spivey in 2019.

It makes a lot of sense for head coach Sam Pittman to extend Arkansas’ recruiting base into Alabama since it’s within the SEC footprint and regularly produces a lot of blue-chip prospects.

Across the 2019-23 recruiting classes, there were an average of 16.6 players with a four- or five-star rating in the 247Sports Composite from the state of Alabama. Over that same five-year span, Arkansas produced only 13 total players of that caliber.

With such a relatively small in-state recruiting base, areas like Dallas and Tulsa have been vital to the Razorbacks throughout history. Supplementing those traditional areas with states like Alabama and Georgia could help them take their recruiting efforts to the next level.

Kavion Henderson’s decision is even more important for Arkansas football because it gives it a player in the 2024 class once again.

The Razorbacks’ first pledge in that group, Benton four-star running back Braylen Russell, backed off his commitment about a month earlier. It was a tough blow because it came on the heels of their third straight loss and he was an in-state player who was the earliest commitment they’d received since at least the 2004 class.

His decision also made Arkansas one of only five SEC schools without a 2024 commitment, with Mississippi State being its only division foe in the same boat. The others were Kentucky, Missouri and Vanderbilt.

Landing Henderson not only gets the Razorbacks back on the board, but it also gives them a top-100 recruit that should serve as a solid base to the 2024 class.

There’s still a lot of time until the rankings are finalized, so plenty can change, but he would become just the ninth player ranked in the top 100 by Rivals to sign with Arkansas. Henderson would be the first since cornerback Chevin Calloway in 2017 — ending a seven-year drought.

Included among those top-100 recruits are only two from outside of the Natural State: Calloway from Dallas (No. 92 in 2017) and Brian Wallace from St. Louis (No. 96 in 2014). That means Henderson would be the first from a non-bordering state.