Search
Home Arkansas Basketball Perspective Matt Zimmerman Said Hogs Could Use SEC Tournament to Get a No.... 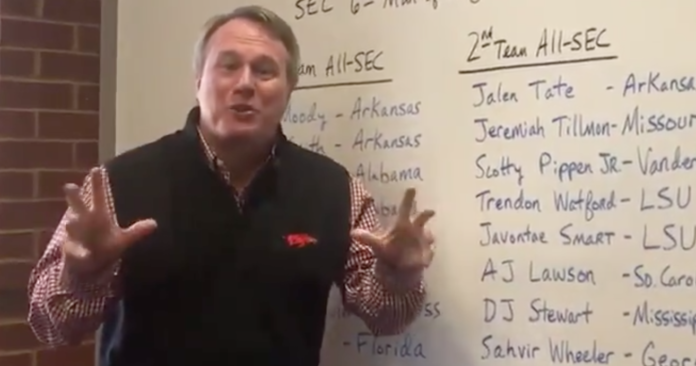 The Hogs have come a long way over the last month and a half, winning an astounding 11 straight conference games and skyrocketing up the national polls to No. 8.

As one of the hottest teams in the country, the Razorbacks are widely considered to be a No. 3 seed in the 2021 NCAA Tournament — even with an early loss in the SEC Tournament that starts Friday.

Most bracketologists think that the most Arkansas could move up by winning the tourney is a No. 2 seed. There is a pretty far gap between the top four projected No. 1 seeds and the rest of the field, as laid out by Bracket Matrix, a site that aggregates 113 bracket projections: 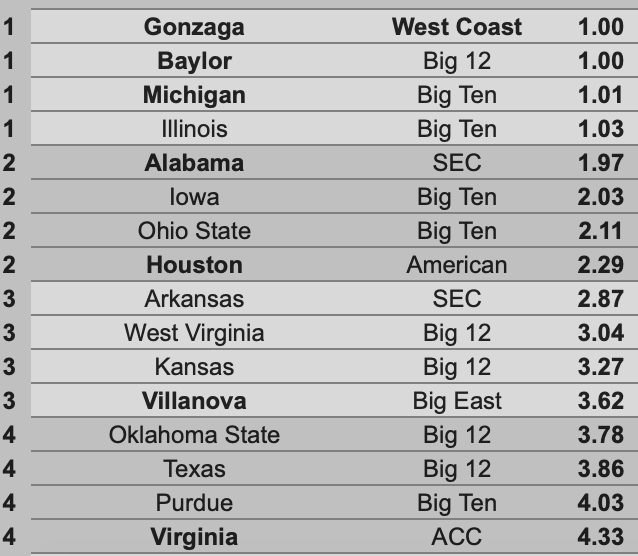 Gonzaga and Baylor aren’t budging. They have locked up their No. 1 seeds.

However, either Michigan (19-3) or Illinois (20-6) could fall out of their perches depending on what happens in the Big 10 Tournament. If the non-SEC teams ranked ahead of Arkansas struggle enough in their own tournaments, then the path could open for something that most fans would still consider unthinkable for this season: the Hogs rising to a No. 1 seed.

Zimmerman, who also serves as the Hogs’ director of basketball operations, said earlier this week he believes there is a small, but real, chance this could happen if Arkansas plays well enough in the SEC Tournament.

“You win Friday, you’ve got a chance to be a two [seed]. You win Saturday, you’re probably going to be a two. You win Sunday, depending on what else happened, you might sneak in there and be that third or fourth one seed,” he said on The Razorback Daily podcast.

“We’re going to be a top ten team,” Zimmerman answered.

The former Razorback assistant then conceded that Arkansas’ non-conference schedule, which was filled with wins against Quad 3 and Quad 4 teams, hurts the chances of rising so high.

“Some of those other teams [ahead of Arkansas in the rankings] will have some bigger non-conference wins, so that might separate you being from a one or two. But, hey, just to be in this conversation is a huge compliment to this basketball team.”

“To be talking about there’s an outside chance for us to be a one, that’s a great compliment.”

Mathematically, the chances of Arkansas getting a top seed are very low, though technically possible if Houston failed to win the AAC Tournament, and somehow neither Iowa, Michigan, Ohio State nor Illinois won the Big 10 Tournament (Arkansas may also need none of those teams to even make it to the tourney finals).

So, Zimmerman isn’t 100% crazy to think Arkansas could luck into a No. 1 seed.

To have even the slimmest hope, though, the Razorbacks need to take care of business in the SEC Tournament. Let’s break down how Arkansas could bring home the trophy for only the second time in school history. 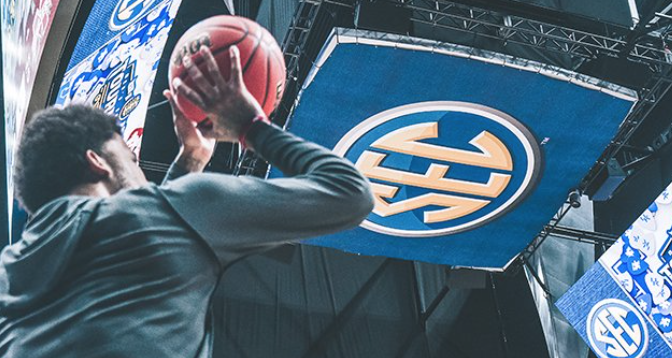 Path to the 2021 SEC Tournament

Arkansas enters the tournament as the 2nd seeded team behind only Alabama. The Hogs’ recent streak has afforded them a double-bye to start the tournament.

The first opponent up on Friday night is Missouri, which beat Georgia on Thursday. Up next would be LSU or Ole Miss,This would all lead up to a rematch with a number of different teams, but Alabama is the favorite to make it to the Finals.

The Hogs and the Tigers have met on two times this season with drastically different outcomes.

They first met on January 2nd when the Tigers came to Fayetteville and won 81-68 in arguably the Razorbacks’ worst performance of the year. This was without Justin Smith in the lineup. This was evident as Missouri’s big man Jeremiah Tilmon scored 25 points with 11 rebounds.

Ironically, in the second matchup, Justin Smith was healthy and Jeremiah Tilmon was out. Smith made his presence known with 19 points and 6 rebounds as the Hogs held on to win 86-81 in overtime. The Tigers have not played well of late, losing 5 of their last 7 regular season games, and they nearly let Georgia storm back from a late 10-point lead in their opening game.

I favor the Hogs in a rematch. Still, this would be considered a tough 7 seed in almost any conference.

“They’re great in transition, they can score the ball. When Justin [Smith] came back you’re talking about a dynamic player, I enjoy watching them play. They score, they defend you. They play together.”

“And Moses Moody is as good as, not just the freshmen, as good as any player in all of college basketball. You talking among the 10 best, very talented player, tremendous poise. [Jalen] Tate it as an excellent point guard. They have all the parts. You got to go like [JD] Notae come off the bench – man, they got all the parts to be successful. But I’m looking forward to it.”

Ole Miss is hot at the right time and desperate.

Since winning 7 of their last 9 games, they will face a talented LSU team to make the Semifinals. Knocking out the Tigers seems like a tall order, but it is very much possible. In the last Arkansas-Ole Miss matchup, the Hogs cruised by to a 74-59 victory and they should be strong favorites again.

By the same token, you never want to face a team that has to win to continue their season and that is where Ole Miss finds themselves as are playing on the NCAA Tournament bubble. Ole Miss isn’t the most talented team in the conference, but behind star point guard Devontae Shuler they can beat anyone they meet in this tournament.

If the Hogs were to advance to the SEC Tournament semifinals, this would be their most likely opponent. The Tigers are immensely talented and liable to take over a game at any moment. These two split the regular-season series but the Hogs hold a convincing win over them only a few weeks ago.

But that last game was with the assistance of Jaylin Williams, who played 30 minutes in the latest matchup. At full health, Arkansas would be favored to win this matchup. If they are missing Jaylin Williams, this becomes a matchup nightmare for Eric Musselman and the Hogs — similar to what Arkansas had to deal with when it missed Justin Smith the first go-around.

The Tigers are talented enough to win the tournament, and coached poorly enough to lose to Ole Miss in their first game.

Boy, this SEC Tournament final would be fun.

The two conference leaders split the series with each team holding a convincing win over the other. Tournament seeding implications would be at an all-time high for both teams, with the aforementioned No. 1 an outside possibility for each team depending on the outcomes of the other top teams.

Getting “only” a No. 2 seed isn’t a bad consolation prize, however.

On a neutral floor, you could expect this to be a toss-up perhaps slightly leaning towards Alabama from a metrics standpoint. Then again, the metrics favored the Tide last time these teams met.

That was 15-point Razorback victory.

The Volunteers beat the Hogs in their sole matchup in early January. Much has changed since then as these teams have moved in opposite trajectories. The preseason favorite Tennessee squad has not yet lived up to their hype, but they have shown flashes.

If these teams were to meet in the conference finals, expect the Razorbacks to be slightly favored with Justin Smith back in the lineup. Since Justin has returned the Razorbacks are 11-2. His absence was evident in the last matchup with Tennessee blocking nine shots against a guard-reliant Arkansas team at the time.

Will we see freshman forward Jaylin Williams in this conference tournament. If so, when?

The cause of his current absence from games hasn’t been made public. But rumors swirling on message boards and on radio shows indicate the most widely-accepted theory is COVID-19 protocols.

Regardless of the reasons, it’s key to consider the implications of his absence moving forward. From a distance, he may not seem like a make or break player on this roster but with the way Eric Musselman schemes for games, this is far from true. Williams’ role is solely dependent on the schematic approach the Razorbacks take particularly in regard to Connor Vanover.

Vanover has played very well of late, but he has also been doing so with more rest. This reduction in minutes is likely welcomed by the 7’3 big man and it has improved his game.

Vanover is only getting that extra rest because of Williams’ emergence, however. His ability to defend and attack more athletic big men has earned him a rapidly growing role on this Arkansas basketball team.

For this reason, his absence has vastly differing impacts if Arkansas plays Missouri compared to Alabama. Jaylin Williams’ athleticism is key against the break-neck pace of an Alabama offense, but against teams that walk the ball up the court (think Missouri/Tennessee/Ole Miss/Florida), the Hogs should be able to manage without Jaylin Williams.

If the Hogs want to win the title and are facing the Crimson Tide, they will need Jaylin Williams. In their last meeting, the freshman played 22 minutes while Vanover rested on the bench. This tactic to keep up with the pace and versatility of the Alabama forwards paid off in dividends.

Williams’ health could decide the outcome of this SEC tournament. 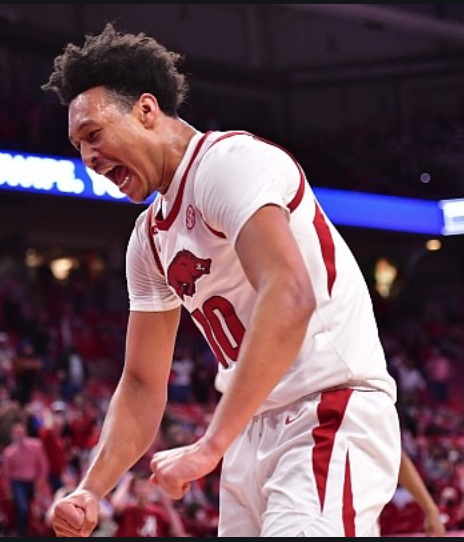 The Razorbacks will have a great chance to take home their first SEC Tournament title since 2000. A title is also likely necessary for a No. 2 seed and absolutely vital for the slightest chance at a No. 1 seed. Plus, the win would continue the red-hot Razorbacks’ streak into the Big Dance.

The Hogs would still be the favorite on their side of the bracket to make the finals. If they did they would likely face a steep task against an Alabama team that would attack Connor Vanover throughout the game. Still, a second-place finish would still be very impressive and a good setup heading into March Madness.

A few days after Zimmerman said he thought the Hogs could nab a No. 1 seed, he walked back that unhinged optimism a bit.

Hear the hilarious exchange at 5:15 below:

Get a full, detailed preview of the 2021 SEC Tournament below from HawgSports.com’s Curtis Wilkerson: