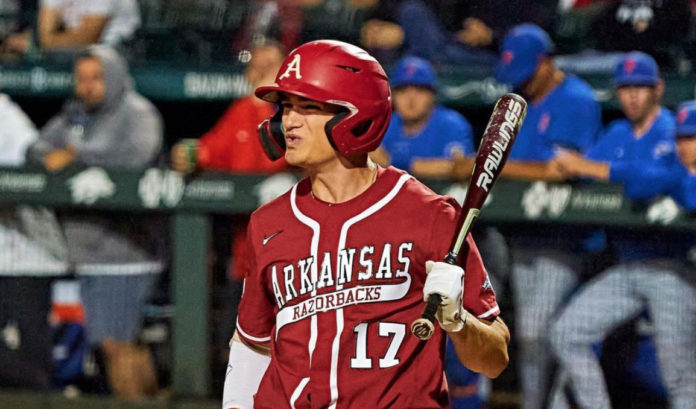 The Arkansas baseball program last won a conference tournament title win in 1985 as a member of the Southwest Conference. Since joining the SEC, the Hogs have gone 35-42 in all-time appearances in the SEC Tournament.

The Hogs are still seeking their first title in what has proven a very difficult task.

But this postseason, of course, seems like the program’s best shot at finally bagging a title.

The No. 1 Razorbacks have proven every naysayer wrong at every juncture in the season so far, including the opener of the SEC Tournament in which they wiped out Georgia 11-2 and then a 6-4 win over a perennial powerhouse in Vanderbilt in Game 2.

Game 1 was led by the spectacular pitching of Lael Lockhart, who came within one out of a perfect game.

“Lael Lockhart had a great game, just peppering the zone in and out, pretty good breaking ball, got a little changeup going there and kept them off balance a little bit,” Arkansas baseball Dave Van Horn said afterward.

In Game 2, the showdown between ace pitchers Kumar Rocker and Patrick Wicklander didn’t quite live up to expectations as both headliners gave up a flurry of runs early on.

The SEC Pitcher of the Year earned his ninth save in the effort, lowering his nation-best ERA to 0.71 and eclipsing 100 strikeouts for the season. Kopps has retired 21 of the last 22 batters he’s faced (allowed one walk).

Now, Arkansas marches on to the SEC Tournament semifinals, where it will play either Vanderbilt or Ole Miss in Saturday’s single-elimination semifinals.

The Arkansas baseball program is a certifiable juggernaut this season.

Consider Florida, Ole Miss, and Vanderbilt are the only teams besides Arkansas to have been ranked No. 1 this year (Baseball America, D1Baseball, USA Today). Then consider the Hogs are 6-1 against the former all those former No. 1 teams.

That’s a tear that few — if any — college baseball teams have ever been on.

247 Sports’ Robbie Weinstein, a college baseball analyst, believes one of those former No. 1s will be Arkansas’ SEC Tournament downfall.

In a sprawling tourney prediction piece, Weinstein predicts Arkansas will again fail to win a title because of Florida — the same team that the Hogs swept at home to finish the regular season.

As he sees it, however, fourth time’s a charm.

“At this point, it’s anybody’s guess as to how the pitching situation will look for these two teams. Florida will have played an extra game in this scenario, but it did get one day off during the tournament between the third round and semifinals.”

“Ultimately, it is a bit difficult to see a team as talented as the Gators going 0-4 against any opponent this season — even Arkansas.”

In another part, Weinstein explains his logic a little more:

“Experts widely considered Florida to be the nation’s top team entering the season, and the Gators disappointed early. But they turned it around in April and had been playing great baseball before being swept at Arkansas to end the regular season.

“That sweep was a little bit misleading, however, as Florida was in each of those games late before the Hogs pulled away.”

He adds that if Florida does win the tournament, the SEC could have five of the top six or seven seeds in the NCAA Tournament.

That has to be a record of some sort.

Arkansas trailed by two after the first inning as Vanderbilt scratched out a couple early runs off starter Patrick Wicklander, who lasted 3 2/3 innings.

The left-hander struck out one and allowed three runs on five hits before giving way to the Razorback bullpen.

Kumar Rocker, who started on the mound for the Commodores, was also unable to make it through four innings.

Vanderbilt’s ace coughed up the lead in the bottom of the second after Ethan Bates brought home a run on a single through the right side and Matt Goodheart was hit by a pitch with the bases loaded.

The Commodores went back in front in the top of the fourth, but the Razorbacks got to Rocker once again with three runs in the bottom half of the frame. Goodheart’s two-RBI double to left gave Arkansas a 4-3 lead before Cullen Smith singled down the line in right to extend the advantage to two.

Ryan Costeiu, who earned his seventh win of the season, was the first Hog reliever out of the bullpen, striking out two in his 1 1/3 innings of work.

He allowed a solo home run in the top of the fifth, but it would do no harm.

Bates delivered his second RBI of the night on a sacrifice fly to center in the bottom of the fifth, re-extending Arkansas’ lead to two. Caden Monke struck out a batter in an inning of work before turning the ball over to Kopps in the seventh.

The right-hander went on to record his eighth multi-inning save of the season and finish off the Razorbacks’ 6-4 win.

With the victory, Arkansas advances to the semifinals of the SEC Tournament for the fifth time in its last seven appearances in Hoover. (via Razorback Communications)

Arkansas’ chances of winning the SEC Tournament might have taken a small hit in Game 1 on Wednesday when Brady Slavens, first baseman and one of the Hogs’ best hitters, went down.

Against Georgia in the second inning, Slavens twisted his ankle when his right foot slid off the first base bag as he tried to finish an infield single.

He fell to the ground in pain and was eventually helped off the field — although he was able to bear some weight on the injured foot.

“He did come back (in the dugout). He’s got a boot on his foot right now, just keeping an eye on it, but I don’t know exactly what’s going on there.”

“I know he had two guys carrying him a little bit, but for him to apply even a little pressure on there, it was very good to see,” teammate Cullen Smith said.

He added that the team’s trainer said Slavens was going to fine with plenty of ice in his future.

Even if Slavens only has a sprain, don’t expect him to be rushed back out any time soon.

Going forward, the most likely replacement for Slavens at first base would be Cullen Smith, who played the rest of the Georgia game at first.

“Similar to Slavens, who played corner outfield at Wichita State and third base in junior college, Smith is not a natural first baseman,” Hawgbeat’s Andrew Hutchinson noted. “He played the other three infield positions while at East Tennessee State before getting a lot of work at first this offseason.”

“I played there all fall. That was the one position in my college career that I really hadn’t played, so I took it upon myself to really get some reps over there. I feel great over there.”

The next man up mentality is perhaps more prevalent on this Arkansas baseball team than its predecessors.

“This is the first team I’ve been on where everybody loves everybody,” Kevin Kopps said.

“Usually teams have groups sometimes, or there’s a couple people that are just kind of like, whatever and don’t really care. And they can be really important people, so it messes with it a little bit. But this team gels really well.”

“The left-hander dazzled in Arkansas’ 11-2 win against Georgia on Wednesday night at the SEC Tournament, striking out a career-high 11 in seven innings of two-hit, two-run ball.”

“His strong outing on the mound helped punch the Razorbacks’ ticket to the third round of the SEC Tournament.

Leading 10-0 with the run rule in effect, Lockhart’s perfect game bid was broken up with one out to go in the top of the seventh. He started the inning with back-to-back strikeouts before an infield single, which was followed by a two-run home run, put an end to what would have been the first perfect game in Razorback history.

Lockhart’s spectacular start was backed by strong run support as the Hogs exploded offensively in the bottom of the second to take the life out of the Bulldogs from the get-go. Arkansas scored six runs on three hits, five walks and two errors, opening a commanding 6-0 lead.

Cullen Smith’s RBI double to right center in the inning was the first of his two big hits on the night. Ahead 7-0 in the bottom of the fifth, Smith hammered a no-doubter over the wall in right to extend the Razorbacks’ lead to eight.

The infielder was one of three Hogs, including Jalen Battles and Christian Franklin, with multiple RBI on the night as Arkansas poured it on from start to finish. As a team, the Razorbacks drew 14 walks, including four with the bases loaded, on the night.

Heston Tole entered in relief of Lockhart and was impressive in his appearance. The right-hander struck out four in two scoreless innings of work to secure the Razorbacks’ 11-2 win.

How to Watch Arkansas in SEC Tournament Semifinals