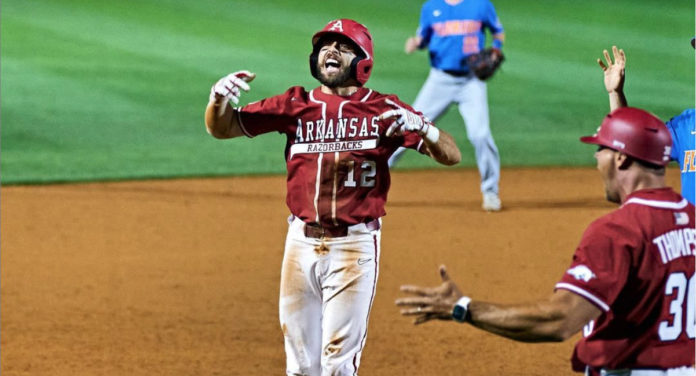 Just as it is with Dave Van Horn, a cranky Mike Irwin is the best Mike Irwin.

The Pig Trail Nation Razorback analyst, who has been reporting on Arkansas sports since the 1970s, was in fine form after the SEC’s all-conference teams were announced on Monday.

In a breakdown of the awards, he first went over the winners.

Van Horn, naturally, got the conference’s coach of the year award after leading the Arkansas baseball to an outright SEC title and a 22-8 record in conference — only the second time a Hogs team has won that many SEC games.

Most impressively, Arkansas baseball became only the second team since the SEC went to a 30-game schedule to win all 10 of its series.

Van Horn also won the award in 2004, taking home the honor after leading the Razorbacks to an outright SEC championship as a second-year head coach.

Kevin Kopps, meanwhile, was no-brainer first-team selection. Kopps has a 10-0 record with 8 saves and leads the nation with a .75 ERA. He allowed only five runs all year.

He also won SEC Pitcher of the Year. He’s only the second reliever to do that, after Georgia’s Josh Fields, and follows Nick Schmidt as the only Hogs to win it.

In a recent broadcast, Mike Irwin estimated that Arkansas won about 14 games it would have probably lost without Kopps.

For Irwin, Kopps should be SEC player of the year.

“Every time he came in, he was just striking people out. They were just swinging at air. They were swinging balls in the dirt,” he said.

“You have these analysts that couldn’t even decide what his pitch was.”

“So it’s just incredible the impact he had on the entire league.”

Irwin added that while Kopps doesn’t throw as many overall innings as a starter would, as a reliever he’s just as important — if not moreso — because he’s able to pitch multiple games over a weekend.

Below are the other All-SEC Hogs:

Robert Moore: Tied for the team lead with 13 home runs and is third with 46 RBIs.

Matt Goodheart: Has hit for 12 home runs and has a team-high 34 walks.

Patrick Wicklander: 1.89 ERA is second only to Kevin Kopps among qualified SEC pitchers (and 1.70 in SEC play).

Having the best ERA among starting pitchers is certainly the kind of bonafide that could merit first-team consideration.

But HawgBeat’s Andrew Hutchinson points out that this isn’t a true snub:

“The three first-team selections were actually better in most of those categories while consistently getting their teams at least an inning deeper into games,” he wrote.

Hutchinson added a side-by-side comparison of each pitcher’s SEC-only stats:

The Biggest Snub to Arkansas Baseball?

The other Arkansas baseball selections were:

It’s in that last category that Irwin has his biggest bone to pick.

He doesn’t see how Casey Opitz, Arkansas’ catcher, was left off.

“What’s going on,” he said, picking up steam at the end of the below video.

“Even if you have the name co-players there, there’s no other catcher in the SEC who’s impacted the team more defensively than he did. It’s just idiotic.”

I don’t know, what — they just went brain dead? What was happening?”

Hutchinson, as he’s prone to do, broke down the numbers.

He came to the conclusion that indeed Opitz has been “hosed” in getting left off the all-defensive teams for two straight years now.

In 2019, Cooper Johnson of Ole Miss got the nod. This year, it another Rebel – Hayden Dunhurst (who did hit strongly enough to deserve his second-team All-SEC selection.)

“Also, Dunhurst has allowed six passed balls this season and Opitz hasn’t allowed a single one.”

“They aren’t close in preventing stolen bases, either. Dunhurst has thrown out just 14 of 54 potential base stealers (25.9 percent), while Opitz has thrown out 9 of 27 (33.3 percent). It is also very telling that teams have tried twice as many steals against Dunhurst as Opitz.”

Finally, statistics don’t factor in the crucial intangibles Opitz has provided behind the plate during this historically successful Arkansas baseball season.

“You can pick any of these teams — Tennessee, Vanderbilt, Ole Miss, Mississippi State, Florida — any of these traditional teams.”

“If you pick one of them and that team did what Arkansas did, you would see more awards going to their players. Arkansas gets penalized just a little bit, I think, because of who they are.”

For more on the team, make sure to watch this really cool special on Patrick Wicklander and a local kid with diabetes: