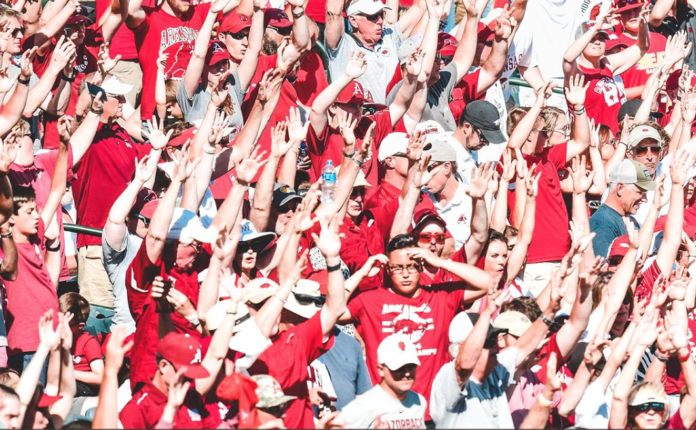 The 2019 Arkansas baseball season did not end the way Razorback fans wanted. Exiting the College World Series like it was a burning theater is definitely not the way to go out.

Still, fans and players alike can hang their hats on the fact that they accomplished two major things this season:

Total attendance at Baum-Walker Stadium this season rose to an all-time record of 348,775 — the third-highest total in the nation. Here’s the breakdown, according to the NCAA:

On average, Arkansas accumulated 8,719 fans per game, the fourth-highest in the country. That also shatters the Hogs’ previous record of a 8,335 average in 2013. It’s the 16th-straight year that Arkansas has ranked in the top-five in the nation in attendance.

In the postseason, Hog fans raised their game even more.

For nine games during the NCAA Regionals and Super Regionals during the 2019 NCAA Tournament, Baum-Walker Stadium welcomed more fans than any other ballpark in the nation.

Arkansas baseball saw 93,868 fans pack the stadium during the two postseason rounds that showcased the Hogs advancing to their 10th College World Series in program history. The total is 4,000 more than attended last year’s regionals and super regionals.

Baum-Walker Stadium was one of eight ballparks to host both postseason rounds and the only one to go over 90,000 in total attendance. In the games featuring the Razorbacks, the average attendance was 10,845 – including 11,276 during Super Regionals. All three Super Regional crowds exceeded 11,000 and are some of the largest postseason paid attendances in stadium history.

And, man, did the faithful travel to “Baum North” at TD Ameritrade Park in Omaha, Neb.. In Arkansas’ first College World Series game against Florida State, the Hogs set the single-game season high for paid attendance.

Arkansas wrapped up the 2019 season with a 33-7 home record, 32 of those wins coming at Baum-Walker Stadium. It’s the second-straight year the Razorbacks totaled 30 or more wins at home.

Now it’s time to round the bases on a new question: Could Arkansas break these attendance records in 2020? It’s very possible, if Dave Van Horn and his staff continue to develop their stars and unheralded players alike at the same rate as they have been.

As Razorback beat reporter Clay Henry writes, “Returning are Matt Goodheart, Heston Kjerstad and Casey Martin. All are capable of leading the SEC in a category or two. Casey Opitz, Christian Franklin and Jacob Nesbit are also returning starters capable of making jumps.

But the cause for much of the optimism is some of the position players who should be on campus soon. Outfielder Chet Allison of Fresno (Calif.) City College has turned down a nice offer from the Dodgers. He’s a likely starter.

‘We’ve got three or four freshmen who can really swing the bat,’ Van Horn said. ‘They can get in the lineup. It’s going to be a lot more competitive in the fall.'”

Hear Van Horn talk at length about the 2020 Arkansas baseball team below: