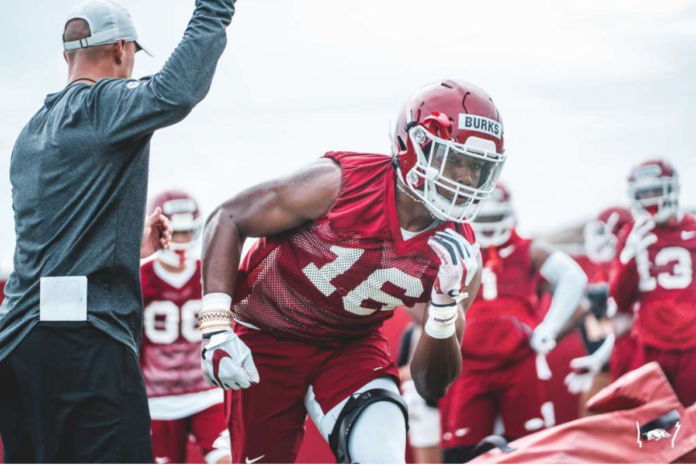 The Razorback football team went through its first scrimmage of the fall this week. Afterward, Hog coaches discussed who stood out the most, and where the most work needs to be done.

The highest praise came from offensive coordinator Joe Craddock in regards to star freshman receiver Treylon Burks. Burks is part of a great freshman class who, if they mature fast enough, will go a long way to helping Arkansas overcome their dismal title odds as seen through betting site portals like betting-universe.com. When asked what kind of ceiling the 6-3, 225 pound Warren native has, Craddock said: He doesn’t have one. That kid can be as good as he wants to be. … He’s got that DeShaun Watson focus. Love having that kid around. Works hit butt off and wants to be great.”

The biggest takeaway of the afternoon was when Chad Morris put a number on exactly how much of his sophisticated offense is being run in practice. Morris said the offense is around 65-70% of the playbook at this point. It’s far ahead of last season when it was at 30%. “We challenged our guys this summer to continue to grow out of the base offense, we’ve been able to do that.”

Although it was a 170-75 play scrimmage, “the hotter it got the longer we wanted to go. We continued to show great improvement all across the board. Next Saturday I’ll expect it to be even better. Everybody got quality reps. Sosa was incredibly destructive. We limited him and Scoota. They were coaching young guys on the sideline. Jacques [McClellion] was playing great. Bumper Pool made several great plays.”

“I was pleased with all of them. John Stephen Jones started it off his his drive. Both Nick and Ben did well and KJ [Jefferson] continues to impress us. We’ve got a great competition going on.”

“John Stephen Jones really got it going. The first series was really important. Ben started off making good throws and then Nick [Starkel] came in and did well too. He had a deep ball that was where it needed to be but had miscommunication. KJ is great, big, and good in his decision making.”

“No injuries today, A’Montae Spivey had some asthma. That was it. We expect to get a lot of guys back next week.”

On the Razorback football offensive line:

“Myron [Cunningham] has been working left tackle but also a little at right guard. We’re just seeing how he goes. He did get some reps over there.”

“Myron is really athletic so I do feel at some point he’ll be in the first team rotation but the question is where. Colton [Jackson]’s been doing well at left tackle so we’re moving Myron around.”

“We’ll move Chibueze [Nwanna] over to right guard some, Brady Latham goes in there as well. We’re cross training guys a lot. I’d have to go look at the film to see who all played there today. [Noah] Gatlin’s injury was a freak deal. We’re just putting our arms around Noah and loving on him, he’ll be back.”

“I think the OL is getting better. Still have a long way to go. We’re getting these guys a lot of reps, we couldn’t do that last year. We’re getting true freshmen in there and guys are challenging each other.”

“Gabe Richardson and Jamario Bell did things today that I was pleased to see. Greg Brooks was very active at the nickel. [We had] two turnovers, our goal is to get three.”

“I feel real good about linebacker depth. We have 5-6 guys we feel really good about. We’re not gunna name names. We pulled Scoota [Harris] and we didn’t have any drop off in play. Grant Morgan can perform and he proved that all spring long. If we were playing a 3-LB scheme we’d start Hayden Henry. He’ll get in a good bit. Do we have enough depth? If we stay healthy I feel good.”

“Scoota and Sosa [McTelvin Agim] are turning into some of the best leaders I’ve been around. They’re not afraid to talk to their teammates and do those things they need to do. We want our seniors to be able to teach the young guys. When you can teach it you have a better understanding of why we do things the way we do it”

“It’s so much different than this time last year. The players trust us and they’re buying into the things the coaches do”

Finally, here’s Chad Morris on the Razorback football program’s direction: “I think we’re right on track. It all starts with the culture and where we are with our culture. During a 170-play scrimmage, our guys were out there and giving max effort. I was pleased. But there is no finish line. It’s all about getting better each day.”