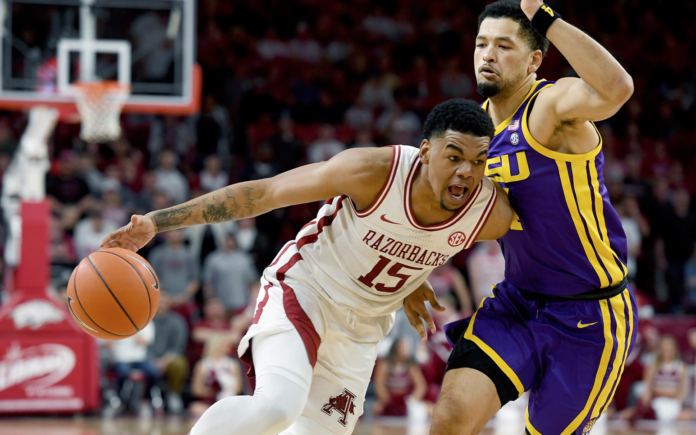 Few draft analysts give Arkansas guard Mason Jones any love when it comes to the 2020 NBA Draft. Although he’s moved up in the last few weeks from the absolute bottom of NBADraftRoom’s 2nd Round mock to No. 43, he’s still widely overlooked by the big boys at ESPN, DraftExpress, Sports Illustrated and The Athletic.

Take Sam Vencenie, the go-to man for all things basketball for The Athletic. Vencenie has Jones projected as the No. 76 player in this year’s draft, which is problematic when only 60 players will be selected.

Sure, Jones was a devastating scorer during his two years at Arkansas, becoming the first Razorback to lead the SEC in scoring. But that distracts from a bigger issue, said Vencenie, who’s also written for CBS Sports, Sporting News and SB Nation.

“I thought [Mason Jones] was abysmal defensively this year. I don’t think there’s a defense for his defense, the way he played it,” Vencenie said Monday on “Hit That Line.”

“He was inattentive. So many times it looked like he was just kind of walking around on the defensive side of the court. I didn’t think he was a particularly good on-ball defender.”

Vencenie just keeps “attacking the rim,” as it were, when it comes to Mason Jones criticisms: “He’s not an elite level lateral mover. He’s definitely a thicker guy, who gets into the paint, bullies other guys and draws fouls that way to get a lot of production.”

These are also the biggest reasons why Vencenie believes Jones should not have won co-SEC Player of the Year honors this past season. “At the end of the day, production speaks for itself. And I’m comfortable saying he should be all-SEC. But I think there were some better guys in the SEC this year I would have been happy to give the award to.”

Jones, for his part, knows that few people are giving him a chance of getting drafted. But he relishes that challenge, just like he relished the challenge of losing more than 70 pounds on his way to become a dominant collegiate force.

“They’re downgrading me because of athleticism,” he told Hoops Hype. “But I just feel like I’m still a Top 15 player in the draft. I still feel like I was one of the Top-5 best players in college basketball.”

So far, Jones has studied the likes of Manu Ginobili, James Harden and Luka Doncic on his way to becoming the co-SEC Player of the Year.

Can he continue to draw from those superstars and improve in the pros as much as he did from his sophomore to junior years at Arkansas?

Jones thinks he will.

What about Isaiah Joe and the NBA Draft?

Get the latest on what insiders are saying about him and his prospects here:

The Analyst Who Calls Jones a “First Round” Talent

There’s at least one college basketball and draft analyst who’s very high on Jones’ prospects for the 2020 draft, whenever it may actually happen.

Rashad Phillips, a former two-time MCC Player of the Year who now runs 2319 Sports Talk, has evaluated and played against plenty of great guards. Hell, in high school he even once out-dueled Kobe Bryant to win MVP of the 1996 Magic Roundball Classic.

So he speaks from decades worth’ of experience and insight when he says that Mason Jones grades out as a “first round talent.”

Jones, as all Hog fans know, is a “terrific scorer,” Phillips said on “The Morning Rush” show on ESPN Arkansas. “He’s a great open court shooter. He has that toughness about him and he’s a kid that loves the big moments, the big stage. And when you have all those types of characteristics, in my book, I just believe that you’re ready for the next level. And Mason has those qualities.”

“He’s a kid that’s obviously a little smaller, a bit more athletic, more of a hybrid type of jump shooter obviously — but he’s a better [higher volume] efficient shooter, 40% three-point guy. So he does grade out to me as a first round talent as well, just because of his ability to stretch the defense. And when you look at the NBA game, teams are looking for floor spacers. Joe fits that criteria.”

So if Jones is such a diamond in the rough, then why do other NBA draft analysts like Sam Vencenie and Johnathan Givony overlook him?

“I think that the beauty of it is you have different voices in the draft, so I respect all of those guys’ craft and what they bring to the table,” Phillips told Morning Rush co-host Tye Richardson.

“Mason is not a high leaper, he’s not a hot flyer, none of those type of things. But what you’re looking at is a guy that reminds me a lot of [former NBA player] James Jones. Uh, remember James Jones won some championships with LeBron [in Miami]. He was a terrific 6’6″ jump shooter. Jones has a lot of those qualities. He reminds me a little bit of Antoine Walker and as the prototypical three and D wing — a Tobias Harris type of player.”

Listen to the entire interview between Tye Richardson, Tommy Craft and Rashad Phillips at 41:30 below:

Tye Richardson brought up the absolute best-case scenario for Jones — Hall of Famer Paul Pierce – as a comparison. Phillips agreed that parts of Jones’ game did remind him of Pierce, especially his ability to surgically cut up defenses from below the rim with supreme footwork, physicality and change of pace.

Jones is still pondering whether to declare for the NBA Draft or stay in Fayetteville for another year. One thing that is yet to be seen is how his relatively slow lateral quickness will translate to the pros, especially on the defensive end, and to what extent staying an extra year could help him develop into a better two-way player (this will be critical because it’s highly unlikely he’ll repeat as a 22+ ppg scorer with the team’s better depth in 2020-21).

“Whatever Mason and Isaiah want to do, we’re here to support them,” Arkansas coach Eric Musselman recently said. “We’re here to gather as much information as they want us to gather. They can gather information on their own as well. But, again, I think it’s just too much speculation right now, because no one knows when an NBA Draft date is going to even be.”

Rashad Phillips chimed in on the Hogs’ other star guard as well: