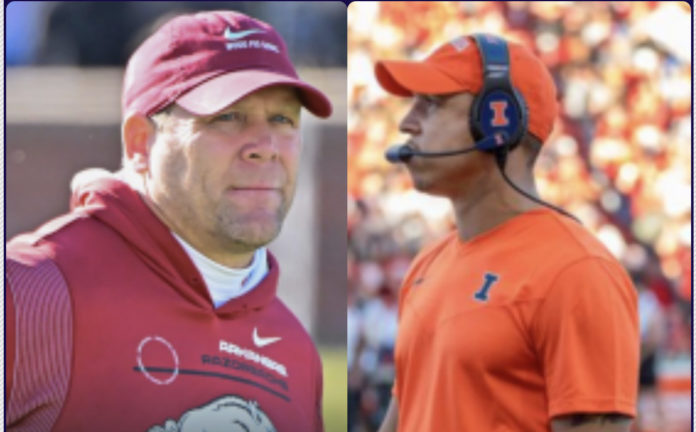 Breakups are difficult. You can lie and say they have no effect. You can say that you’re a better man or woman afterward especially if your then-significant other was often trouble. They might have fooled around and not been there when you needed them. Your friends might have tried to keep you together while others tried to tell you that you’re better off without them. But that doesn’t stop the emotions from overwhelming when the tie has been severed. Three years is a long time.

Such is the sensation of being an Arkansas football fan or follower after reports broke that Razorbacks defensive coordinator Barry Odom will be the next head coach at Nevada-Las Vegas.

Odom spent three seasons running the Razorbacks’ defense. The relationship was up and down, to be sure, but the fact he helped the Hogs to three straight seasons of bowl eligibility – while serving as an experienced former head coach consultant for first-time head coach Sam Pittman – is something that won’t quickly be forgotten. Perhaps a longer-term relationship seemed too good to be true, even after Odom’s contract extension during the off-season between 2021 and 2022 suggested both parties were in it for the long haul.

Alas. Somewhere in the last year, the little things that once delighted were gone. Sure, he’d lost a lot of his players and he deserved some leniency. The good faith and credit Odom had built during the previous couple of years staved off the fracture. But you knew it. Deeper problems lay below the surface. Something was just…different.

Then it happened. After the parting of ways, fans are left wondering where the Arkansas football program goes from here. The Hogs have to get back on the proverbial horse. Plenty of fish in the sea and all that. But are all the best partners already taken?

Pittman spent a bulk of the last week on the recruiting trail with players. Now the Hogs’ head coach, entering his fourth year at the helm, has to court a coordinator, too.

Odom will leave Arkansas as the highest-paid defensive coordinator in school history. He was also the highest-paid DC in the SEC this year, too. His (actual) relationships with his colleagues and players notwithstanding, the numbers Odom provided should not, in theory, be too hard to improve upon. This is where Arkansas’ scoring defense and total defense ranked in FBS and the SEC during Odom’s three seasons.

If the Hogs give up 429 yards or more in the Liberty Bowl against Kansas, the 2022 Razorbacks will hold the ignominious distinction of being the worst defense, in terms of yards allowed per game, in school history. That means overtaking a 2020 squad which, to their modest excuse, played only 10 games, all in the SEC. You know, back when the SEC was still the best football conference in all of college football.

Based on past tendencies, Pittman may return to an ex, so to speak, to replace Odom. He brought strength and conditioning coach Jamil Walker with him from Georgia back before the 2020 season. And even though Walker was fired the day after Arkansas’ season finale against MIssouri this year, other reports have Pittman hiring Ben Sowders, a current Louisville assistant who worked with Walker and Pittman on the Bulldogs staff when they were both in Athens, too.

But let’s take the approach that athletic department administrators do when they are seek a new head coach and look at prospects nationwide. Below are the three most interesting unofficial candidates, in my opinion, to replace Odom.

Shocker, isn’t it? The Miami (FL) co-defensive coordinator and linebackers coach is a Batesville native who has 22 years of experience with schools in the SEC. Or 25 if one wants to include Texas, a future member of the league. It’s almost a given that Pittman, who has 12 years of SEC experience, has crossed paths with Strong at some point over the last two or three decades.

Strong was a dynamite head coach at Louisville from 2010-13, but his head coaching gigs with the Longhorns and at South Florida left things to be desired. When USF let him go, Strong spent a year with Nick Saban at Alabama as an analyst, a year with Jacksonville in the NFL and then this last year at Miami. But Strong made his hay at South Carolina and Florida serving as a defensive coordinator for some of the strongest oppositions in the sport in the 2000s.

Walters is the current defensive coordinator at Illinois working for former Hogs head coach Bret Bielema. Illinois gave him a raise to $1.05 million for next season which could very well be enough to keep him in tow. The allure of the SEC from the Big Ten still exists, though. Bielema himself bought it like countless others.

The Fighting Illini defense finished the 2022 regular season with No. 2 total defense in all of FBS, giving up just 263.8 yards per game. They were tops in college football’s highest level in scoring defense, too, allowing 12.3 points per game.

Tell me the Arkansas fan base wouldn’t get just the tiniest bit of schadenfreude at poaching one of Bielema’s top staffers.

Leonhard has Badgers blood. He was a three-time All-American safety at Wisconsin in the 2000s before a 10-year NFL career. He returned to Madison in 2016 as a defensive backs coach and took over coordinator duties the next season. When Paul Chryst was fired midseason, Leonhard earned the interim tag, but Wisconsin didn’t hire him on a permanent basis.

Reports over the weekend suggested Leonhard is returning to Wisconsin as DC in 2023, but as of Tuesday, he hasn’t officially re-joined. Could being spurned provoke a change of scenery?

Sure, the last time Arkansas nabbed a Wisconsin Badger, it ultimately didn’t go too well (see above). But at some point karma is bound to work in the Razorbacks’ favor again.

Schumann coached on the same staff under Kirby Smart as Sam Pittman, starting with the inside linebackers at Georgia in 2016. He was elevated to co-defensive coordinator in 2019, a title he shares with Will Muschamp.

This hire would be a bit unorthodox because Scott has no experience as a defensive coordinator, but he has both ties to Pittman (they coached the line on opposite sides of the ball together for three years) and the state (he’s from Crossett and played at Arkansas Tech). He’s just 38 years old, so he’d still fit the bill of a young, up-and-comer, too.

Getting a coordinator with head coaching experience may not be as important to Pittman as it was three years ago, but you can’t do much better in this department than the former head coach at Vanderbilt from 2014-2020. He also spent a year coordinating at Auburn before heading to Stillwater, where his Cowboys finished No. 8 out of 10 Big 12 teams in total defense this season.

Ryan Walters was actually in Arkansas this week for the Broyles Award ceremony: