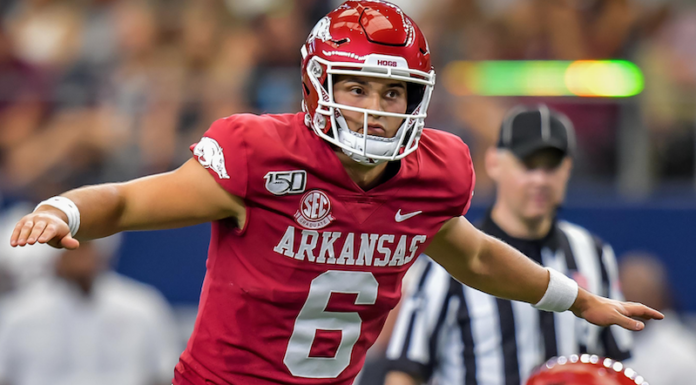 A week ago, SEC football analyst Clint Stoerner said there’s “no doubt” that Ben Hicks should be the Hogs’ starting quarterback.

After the Hog quarterbacks’ showings on Saturday night, that looks like it will be the case very soon.

Nick Starkel completed just seven of 19 pass attempts for 41 yards. All night long, it seemed, an SEC TV broadcaster pointed out the technical flaws in his footwork which cause him to consistently throw behind his intended targets.

After the game, Morris mentioned Starkel was healthy and had looked fine in two weeks’ worth of workouts. “But I just felt that he wasn’t in sync, wasn’t in rhythm. I felt that early in the game but really even more so at halftime. I thought we got the lead, we got a little bit of momentum on our side let’s see what this quarter holds and we go two three and outs and I needed a spark and I felt that Ben was going to provide that for us.”

Replacing Starkel, Ben Hicks completed five or eight passes for 81 yards. He likely would have been more accurate had the pocket not continually collapsed on him.

After the 20-24 loss, Hogs coach Chad Morris said there is “no doubt” he will reevaluate the Hogs’ quarterback position. “We’ve got to get something that’s going to provide consistency and provide that spark for us and we’ll revaluate that when we get back on.”

Morris did not bring Hicks in to replace Starkel until the 3rd quarter. He said he didn’t consider making the change earlier. Hogs analyst Mike Irwin said he should have made the change, however.

“I’ll bend over backwards trying to be fair to a new head coach but Chad Morris’ failure to replace Nick Starkel until the late 3rd quarter is baffling,” Irwin Tweeted. “Starkel was 7 of 19 at that point for an average of 2.2 yards per completion. Hicks ended up 5 of 8 and 10.1 yards per catch.”

“Starkel has struggled in two straight games now. His numbers tonight were pitiful. The change should have been made in the 2nd quarter at the latest. We all have eyes. It was obvious Starkel needed to sit,” Irwin continued.

“Hicks basically played one quarter. Take his 4th quarter numbers, add two more quarters and you end up with 243 yards passing in the game instead of 122. Make the change at the end of the 1st quarter and you probably win the game.”

Here’s what Ben Hicks had to say on the position being reevaluated:

Credit to Coach Stoops and obviously Lynn Bowden, just a unbelievable football player, we knew that coming in, we knew he was going to be quarterback, we felt you know that they were going to be the ball in his hands most of the night, and they did that. Fifty-four runs, defense was on the field entirely too much in the third quarter. We went two-three and outs and again six plays, six yards in the third quarter, had the ball three minutes and 45 seconds, it’s hard to hold on any momentum when you do that. That was very disappointing.

They had the ball 11:15 and obviously flipped the momentum in the third quarter. (I) was proud the way our guys fell back and gave us a chance but you know we couldn’t sustain the momentum early in the game but it’s just frustrating. A lot of hurt in that locker room and you know it’s something we just going to get back in and go to work.”

On trials on the red zone …
“Well I thought tonight we had a couple opportunities, I think we had CJ open one, we were just unable to execute and unable to just, you know, hit it, you know hit the play, hit the pass, you know whether that’s get a TFL or you know or whatever that is. We had opportunities. It wasn’t we didn’t have the opportunities to score especially on that first quarter of the game and getting down there and we just got to execute that’s really what it comes down to.”

#10 Bumper Pool, So., LB
On the difficulty of stopping the run game…
“We didn’t do a good enough job stopping runs. That led to Kentucky getting the ball a lot in the second half and getting long drives and scoring. We needed stops.”

On wearing down in the second half…
“We can play all night. Being on the field too long is never a good thing. Getting off on third down would have helped us a lot.”

On facing 14 straight SEC loses…
“It is definitely one of the more difficult things I have been through. At the end of the day, we will get back in there and work hard and fix mistakes. That is all we can do. We aren’t going to get down on ourselves. We have a lot of good guys. Our team culture is strong. Even though we aren’t there right now, we are close.”

Close, but yet again no cigar. Trey Biddy of HawgSports breaks down the dysfunction here:

On being a leader and mentoring younger players after a loss…
“I just tell them how I experienced a loss when I was younger. A lot of the freshman are playing early. I try to use myself as an example. I also try to keep them positive as much as I can. They are good and probably better than I was as a freshman. The future is bright for them.”

On the UK’s Lynn Bowden Jr. taking over a new role as quarterback…
“He makes the right plays at the right moment. He is a great athlete and a hell of a player. We knew what was going to be expected, especially with him as quarterback. We just didn’t stop him when it was needed.”

On keeping a positive mindset…
“This year you can see the big turn-around between year one and year two. The majority of our games are very close. We will win soon. We need someone to step up and make plays in the tough times.”

It’s not sexy, and it sure ain’t flashy, but continuity and consistency are the keys to high-level production on the football field.

Chad Morris’ arrival in late 2017 to the Hogs football program triggered a rush of transfers out of the program on one end, coupled with an influx of talented newcomers on the other end.

Seventeen games into his tenure, it looks like the smoke is finally clearing. Five Razorbacks have risen to the fore as the best in terms of sheer playmaking. When the Hogs need someone to take it to the house, their best bets are the wide receiver trio of Treylon Burks, Trey Knox and Mike Woods, along with tight end CJ O’Grady and tailback Rakeem Boyd.

It’s been hard to get all five on the field at once with injuries to the likes of O’Brady, Burks and Knox, but all those appeared to be cleared up going forward. “At this point in the rebuild, the sooner you can get some consistency in that starting unit, to work at least 75% of the time,” the better, former Hogs quarterback Clint Stoerner said. If “the same guys are communicating with the same places versus just running new guys in and out, I think [the team will] do significantly better.”

In the future, the Hogs will likely have a dual-threat type quarterback who will be a game-changing threat in his own regard. But that future isn’t here yet. Right now, the Hogs have two quarterbacks whose strengths are primarily in their arms.

And the current starting quarterback, Nick Starkel, is struggling mightily with accuracy. Before getting injured in the second quarter of the Texas A&M loss, he had thrown six interceptions in the three halves he’d played.

Backup Ben Hicks played well enough in the second half to give the Hogs a shot at winning and earn a standing ovation of their fans. Hicks delivered the ball to those five top playmakers without losing his cool. Hicks completed 15 of 27 passes for 188 yards, one touchdown and, most importantly, zero picks. “You talk about answering the bell and going down there and giving your team a chance to win,” Stoerner said on the Buzz 103.7 FM.

And so, “Ben Hicks earned the position this week. If I’m coaching, that’s the guy,” Stoerner added.

Nick Starkel got the starting position because he has better arm strength and overall talent. With the “arm strength and the size, and when the guy walks in the door, you want that guy to be it. Because he could be such a difference maker just from a talent standpoint,” Stoerner said.

Overall, thanks to a strong half against Ole Miss and a great game against Colorado State, Starkel’s numbers are still superior to Hicks’ this season:

But when you drill down to just the last two games, Hicks comes out ahead. In those two games, Starkel is completing 59% of his passes to his own teammates, but he’s also throwing way too high of a percentage of interceptions (six in 67 attempts). A nine percent interception rate simply won’t cut it.

“The fact of the matter is — he can’t turn the football over,” Stoerner said. “This team is much better than I think that we understand they are, when you don’t turn the football over. But it’s a fragile team. It’s a extremely fragile program. If you turn the ball over, three, four, five times or less — this week it was five turnovers and fourth down conversions — you cannot overcome that. Regardless of who you’re playing.”

“You hope things can turn around for Nick Starkel, because those are career killers when you’re extremely talented. But, whatever the reason, he’s the football over every single time he’s on the field. It’s happening at an alarming rate. Then you throw Ben Hicks in there and he makes three or four big time throws. I know he doesn’t have the arm strength that Nick Starkel has, but it’s not a problem. It’s not an advantage either, but it’s not a problem.”

“It’s no longer about building for next year, it’s no longer about this guy’s arm, it’s about winning football games,” Stoerner continued. Based on Chad Morris’ expectations for improvement, coming into the season, the Hogs needed to win four or five games this year.

“This team is significantly better and has a chance to win games if you don’t turn it over. And Ben Hicks is that guy.”

Make sure to listen to the entire Buzz 103.7 FM interview here:

And check my latest post on the Hogs’ phenomenal freshman out of Warren: