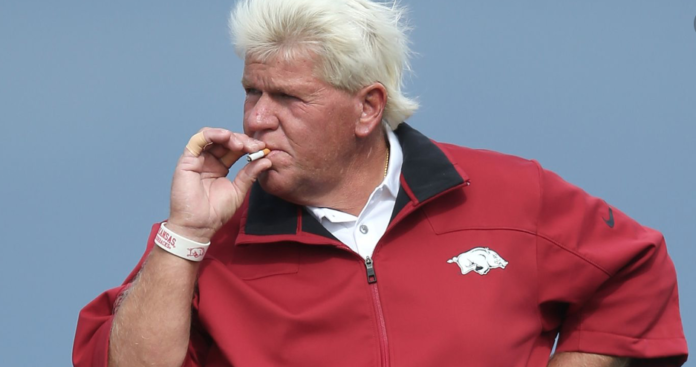 John Daly, the two-time major champion and one of the greatest Arkansan golfers of all time, announced he has bladder cancer. It’s serious enough that he’s already gotten surgery to remove it, but his urologist has told him there’s 85% chance it comes back.

“I’ve got to go back and see him in three months,” he told the Golf Channel. “They will probably have to cut it out again. It’s probably going to come back, and then another three months that you don’t know. You just don’t know. Luckily for me they caught it early, but bladder cancer is something that I don’t know all the details. But it doesn’t look like it may go away. We will just see what happens. Maybe there’s a miracle.”

Daly said the prognosis will make him change some of his famously indulgent eating, drinking and smoking habits. For instance, he said he’ll pull back on drinking Diet Coke (which in the past has been up to 15 cans daily, or 515 gallons a year). In fact, his urologist gave him the bad news when he was about to sip on yet another can.

“I’m cutting way, way back on the Diet Coke and counting minutes before I can have a cigarette. I’m trying to quit smoking,” Daly added. “The doctors aren’t saying it’s too late. Unfortunately, it’s a cancer that keeps coming back. But I’m going to listen to them, and I’m going to try and quit smoking. If it comes back, it comes back. Six months to a year, if it doesn’t go away, I’m going to live my life. I’m gonna have some fun.”

John Daly has strong Arkansas roots, spending much of his childhood in Dardenelle, Ark. and then starred at the U of A in 1984-1987.

He arrived on campus at about 235 pounds, but said his Razorback golf coach Steve Loy had a plan for him. Loy, who smoked Marlboro lights, started encouraging him to smoke.

“‘Just start smoking. Here, have a cigarette. Whatever you got to do to keep the weight off,'” Daly recalled Loy saying in a 2016 interview with Graham Bensinger.

“I honestly think coach wanted me to lose the weight and keep it off. I mean, he was a tough, tough coach. The way he did things, some of it was good, some of it was bad, like any other coach. But I wanted to play for the University of Arkansas,” Daly says in the video below. “I wanted to play for the Hogs and I was going to starve myself to do it. I didn’t care how I had to do it.”

Daly, who has said he hates drinking water, recalls an episode in which he wound up in a Fayetteville hospital, dry heaving from hunger and dehydration.

When he woke up, “the first person I saw was Coach [Loy]… I think he was happy that I didn’t die, but I don’t think he wanted me to change anything.”

John Daly would lose 60-70 pounds while on the Hill. But that success led to a multiple-pack-a-day smoking habit starting at age 19. He later estimated he smoked up to 18,000 cigarettes a year. Daly left college early for a pro career in which in he won the PGA Championship in 1991 and the The Open Championship in 1995.

Through much of it, he developed a bad boy, party-hard image that was mostly grounded in reality.

Sometimes, Daly boozed until 7 or 7:30 a.m. for tournaments with 8:00 or 9:00 a.m. tee times. Sometimes, he didn’t sober up until it the 14th hole. “Wherever I set course records or whatever, I would be barefooted, drunk, playing golf, making every 20-footer I looked at.”

Daly said he play more freely in such a state.

“I used to be able to shoot pool really good, when I had a great buzz going. But if you get me sober and play pool, I wouldn’t make a ball.”

“When you’re winning money from people playing pool, you know you’re playing better,” he told Graham Bensinger. “I mean, your body’s relaxed. You have confidence in yourself to do things more, maybe it’s more aggressive, in a good way. Not a bad way. I don’t know. — I’m not making an excuse to drink or anything… But when I had a good buzz going, I thought I could make everything, play really good golf.”

To say the least, Daly has lived a life that most people can only dream of. Even though his golfing career has faltered in recent years, he’s still a successful businessman with his own clothing line and a golf course (Lion’s Den) back in Dardenelle. His ability to function at such relatively high levels while essentially dirty bombing his own body is astounding.

Perhaps, this bladder cancer is the wakeup call he needed to not treat his body quite so harshly.

“I always tell people I’ve lived one hell of a life. No matter what happens, I’m not scared to die or anything,” John Daly said. “It would have been nice to play the last seven or eight or 13 years of my career a little more healthy. But hey, I’m still working, I’m still living life, I’m still doing the things I need to do. … I can accept the challenge. I’m not scared of that. I just want my kids to be OK and everyone else in my family.

Hey All, thank you all so much for all the love, texts, msgs & support thru this! It’s all still shocking for me but know I’ll do what I have in me to beat this! My whole life I’ve beaten the odds, so it’s NOT time to stop now! Ready for 2020 to be fkn over! #gripitandripityall

Here’s the interview in which Daly talks about his drinking habit and golfing: