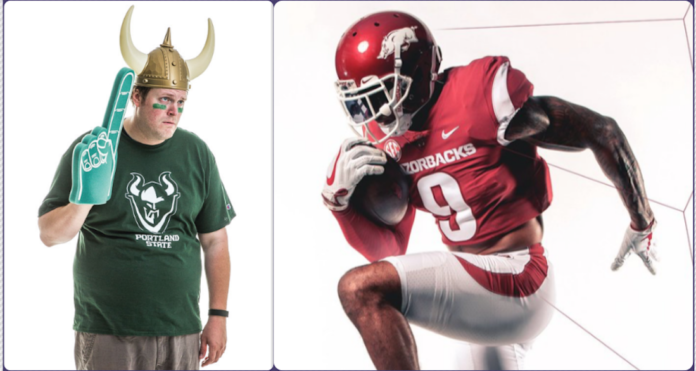 Portland State, Arkansas’ season-opening opponent, is not the puffiest of powder puffs.

The Vikings have, for starters, a big-time tight end in 6-3, 245-pound Charlie Taumoepeau. They also have a big-time big guy in 6-10, 410-pound John Krahn. And they return a boatload of starters in a program that is on a similar arc of improvement as Arkansas’ — from 0-11 in 2017, to 4-7 last year to probably above .500 this year. Plus, Portland State boasts a freshman with perhaps the coolest name in all of college football: Ethan Tela-Porter.

But going from potential sleeper in the small college FCS to scoring one of the biggest upsets of the year? That’s just too big of a jump. Yet it’s exactly what Oddshark, the sports betting and odds site, has predicted for the Portland State-Arkansas game on August 31 in Fayetteville:

There’s no getting around it. This is pure, undiluted disrespect.

Especially when considering that Oddshark has other Power 5 programs handily beating their small-school competition in college football’s opening weekend. It has Minnesota winning 37-22.6 over South Dakota State, for instance, and Tennessee taking out Georgia State 33.3 to 13.8. Granted, said disrespect is likely computer-generated. But that doesn’t make it any less of a slap to the faces of Razorback fans.

There are a number of reasons why Arkansas will rout Portland State. They start with the obvious ones, such as the Hogs being much more talented, stronger and (likely) faster at most positions. Plus, the Razorbacks have huge chips on their shoulders after coming off a 2-10 season. Under the leadership of new, better quarterbacks, with an upgraded cast of wide receivers, they are eager to start atoning for last year’s horrible finish in front of a home crowd.

Here are more reasons why Arkansas will beat Portland State on Saturday:

UPDATE: In the week leading up to the game, most major sports sites are doing the right thing and predicting an Arkansas win. ESPN, for instance, pegs the Razorbacks’ chances of winning at 97.9%.

In the 21st century, Arkansas has played the part of giant and giant-slayer in big upsets. See the :40 and 3:19 markers below for those low/highlights.