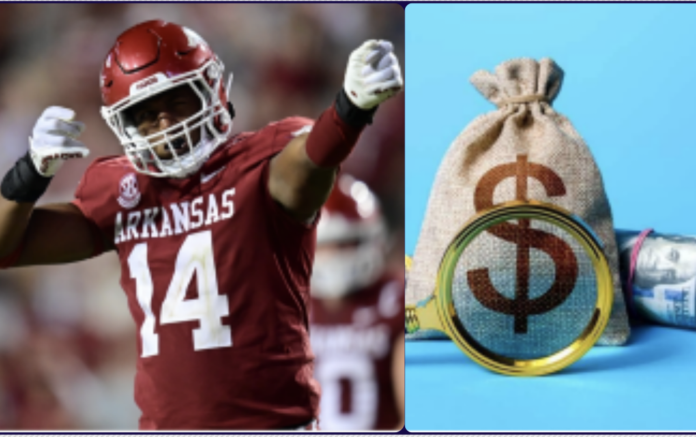 Soon enough, the more rosy-glassed Arkansas football fans must suspect, this too shall pass.

Last off-season, after all, it wasn’t until mid January and the following months that four of Arkansas’ most impactful transfers during the 2022 season announced their decisions to transfer to the Razorbacks. The Hogs would have been in a sorry state indeed without the services of Dwight McGlothern, Drew Sanders, Matt Landers and Jordan Domineck.

At the end of the season, three of those four did what was expected in the modern football landscape. Sanders and Landers announced they were entering the NFL Draft, after having showcased enough of their abilities to merit a selection in the upcoming draft.

McGlothern, meanwhile, technically has until January 16 to declare for the 2023 NFL Draft although it looks like he should return for another season in Fayetteville. The junior had a successful individual season but had the misfortune of playing on the nation’s worst passing defense. With an overhaul in the defensive coaching staff, the emergence Quincey McAdoo as a fellow ace cornerback and an extra year of strength and condition, McGlothern can address some if not all of the below issues, as laid out by NFL Draft Buzz, heading into the 2024 NFL Draft.

The Most Perplexing of Arkansas Football Transfers

The redshirt senior showed out for the Hogs in 2022, finishing third in the SEC in sacks as the most disruptive defensive lineman on the team. Hog fans rejoiced when Domineck announced in early December he was returning for the 2023 season, assuming he would be the latest in a line of great defenders like Grant Morgan and Bumper Pool to put in an extra year on the Hill to help further the Razorbacks’ resurgence into the national elite.

Nothing seemed out of the ordinary in the following weeks. Domineck played well in the Liberty Bowl and shared his excitement with the world:

Still, despite all these apparent good vibes heading into next season, on January 2 Domineck announced he’d changed his mind and was transferring away. There had been some surprising announcements until that point, such as Ketron Jackson and Jalen Catalon, but this one took the cake.

It felt like it added insult to injury on a torrent of exiting transfers that makes Arkansas neck and neck with Texas A&M for No. 1 in the nation in that category. (On top of that, there’s now the prospect of losing offensive coordinator Kendal Briles on top of Barry Odom, Michael Scherer and Dowell Loggains.)

Of NIL and Greener Transfer Pastures?

The days following Domineck’s announcement have not brought any resolution for fans and media members alike.

Phil Elson, co-host of ESPN Arkansas’ Half Time show, expressed as much when he discussed how playing in the SEC, long regarded as the nation’s best conference, typically serves as a big inducement for transfers. That was the case for defensive lineman John Ridgeway, who used a one-season stop at Arkansas after playing in the FCS ranks as a showcase for the NFL. It also was the case for another John, this one of Morgan lineage, who a few weeks ago announced he was transferring from Pittsburgh to Arkansas to show off his elite skills off the edge against SEC offensive linemen.

Showcasing against elite competition was a reason Domineck himself transferred from Georgia Tech last year in the first place.

Now, if he ends up choosing to leave the best conference in the land, there’s going to be all kinds of questions.

“For Domineck, I don’t get it,” Elson recently said. “It makes me think, it makes me think somebody is saying ‘I got some money for you, my man. Come and get it. This is your last chance to do it.'”

John Nabors, the host of the Locked on Razorbacks podcast, agrees.

He’s racked his brain for a rational reason why Domineck would transfer away from playing in the best possible place to pad his resume and like Elson struggled to come up with one.

“I have a hard time believing that the coaching staff told him” to transfer, Nabors said. “So the only logical thing that I can think of is that he got tampered with. That’s the only thing I can think of. That’s the only thing that makes sense. I guess we’ll find out if he ends up going to a different school of note because there’s definitely some schools out there that I’ve been following and hearing about a lot of their tampering ways.”

Here, Nabors is alluding to NIL deals that are offered as inducements for either recruits or current college players to sign with other programs. While it’s a violation to offer deals to potential players for a college football program as opposed to current ones, by now it’s an open secret that these kinds of dealings are fairly commonplace across the bigger conferences in Division I.

While Jordan Domineck did not offer any specific reasons for leaving Arkansas in his departure Tweet, he did thank the Razorback fan base for their support. His mother, Stacy Domineck, saw Nabors’ take and decided to speak up for her son and family.

“@BuzzJohnNabors, watched your podcast mentioning Jordan,” Stacy Domineck Tweeted. “Thanks for recognizing his impact. Can’t stop people from speculating, but I want to try! Jordan LOVES football. No hidden agenda, no foul play or tampering, no chasing NIL or lying about plans to stay. He just wants to play.”

When questioned by an Arkansas football fan about how no money chasing could have been in play, Stacy Domineck responded: “Jordan announced his plans to stay nearly a month ago on Dec. 8th. Seems a LOT has changed since then. So sorry the outcome is not the one we had hope for, but support matters. Truth matters. Respect matters. Manners matter. Maturity matters.”

This still doesn’t exactly illuminate the matter of why Domineck decided to leave, but it does open the question of whether a development since December 8 like the hiring of a new defensive coordinator could have played a role.

More is sure to come out once Jordan Domineck announces his destination, but in the meantime the silver lining is that apparently this exit happened without bad blood between the Domineck family the Arkansas football program. Still, despite Stacy Domineck’s insistence, so many questions remain.

“This is something that I can’t be okay with,” Nabors said on his podcast. “I’m sorry. I can’t sit back and just be like, ‘Okay, that’s fine,’ when you did all you did, you said all you said. You said you were coming back, you told everybody to chill out because they were all concerned about next year’s team, and then you hop into the portal.”

Hear more from Nabors starting around 6:30:

Tom Murphy on What Sam Pittman Needs to Do

The Arkansas football beat writer for the Arkansas Democrat-Gazette recently broke down what he feels Pittman must do to staunch the exodus of Arkansas transfers in the remainder of this off-season as well as heading into next off-season.

“Sam Pittman said when he got this job that the one thing that was not going to be an issue for him was communication,” Tom Murphy said The Morning Rush on ESPN Arkansas. “He goes, ‘We might have some issues on this team, but one thing we’re not going to have is a lack of communication. I’m going to listen.’

And I think it’s important for him right now to listen. I’m talking about exit interviews of the guys who were out of eligibility, exit interviews of guys who entered the portal, if they have them. And then talk to current players on the team [and ask] ‘What’s going on, what has led to this?'”