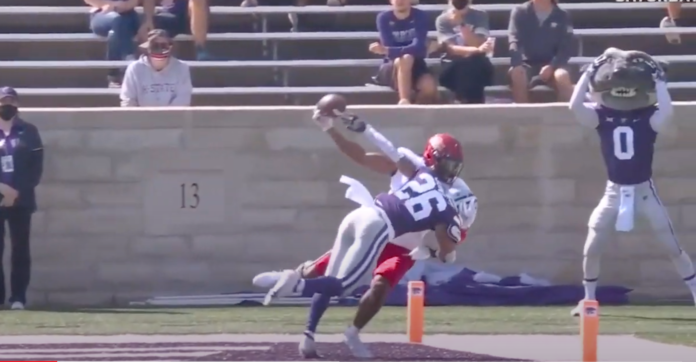 Heading into Saturday, many Razorback fans would have assumed that the best Arkansan wide receiver in the state was Treylon Burks, the 6’3″, 230-pound do-everything threat from Warren.

Arkansas State fans, however, had their own ideas on the top native Arkansan college wide receiver. They pointed to their own Jonathan Adams, Jr., a 6’3″, 220 pound senior who starred as a third wheel behind two first-team all-conference receivers last season.

The problem was that while Burks showed out against SEC competition, Adams’ production mostly came against Sun Belt competition. Sure, Adams did have seven catches for 85 yards against Georgia, but that came in a 0-55 blowout. Then, in the 2020 season opener, he delivered a middling six-catch performance in a loss to Memphis.

In short, Adams had no standout performance against big-time competition.

On Saturday, Adams was the breakout star in A-State’s nationally televised 35-31 upset at Kansas State, the program’s first against a Power 5 school since 2008.

Among his eight catches for 98 yards, Adams had three touchdowns including a breathtaking, one-handed, grown-man grab here:

Jonathan Adams Jr. is playing big boy football. @TonyPauline notes that @ItsJayAdams is a big- strong possession receiver who consistently wins out for the 50-50 balls. pic.twitter.com/fw92tX4dKX

Sure, this sublime snag didn’t technically count. But it’s clearly the greatest catch of the season so far. It makes Jonathan Adams Jr. look like the second coming of Odell Beckham, Jr.

“There is no 50-50 ball with that guy. It’s about 80-20,” Arkansas State’s head coach Blake Anderson said in the postgame press conference. “… The catch they overturned, that’s one of the best catches I’ve ever seen. It definitely would have been a top-10. It ought to be anyway.”

Reggie Bush, now an analyst for Fox Sports, also joined the praise party. “He was a man among men today,” Bush said.

“I love how he uses his body like a basketball player, almost boxes out the defenders. That was a crazy one-handed catch right there. And then, again, another back shoulder one-handed catch. This guy is definitely ready to play on Sundays.”

The most impressive part is Adams was doing all of this on a partially torn MCL. With a strong, healthy season, Adams is poised to become the highest drafted wide receiver to ever come out of A-State. Currently, former Philadelphia Eagles great Fred Barnett (drafted in the third round, No. 77 pick) holds that designation.

Likewise, early on Treylon Burks looks the part of a first or second round pick in the 2022 NFL Draft. At about 10 pounds heavier than Adams, he’s a little stronger. Burks also has hands larger than 92% of all NFL wide receivers.

Both are extremely quick and fast for their size, with Burks showing more versatility by regularly playing kickoff and punt returner. Adams, though, has mastered the one-handed catch like no other Arkansan.

So why was Jonathan Adams so lightly recruited?

While at Jonesboro High, he was a long jump state champion, state qualifier high jump and excellent basketball and football player:

Jonathan Adams Jr. is an absolute freaky good WR for Arkansas State. Found this in an old article (https://t.co/pwDzDzA39R): pic.twitter.com/ERhmMrYDXU

He also made big plays on the gridiron that indicated he could produce at a high level in college:

Amazingly, Adams was only rated as a two-star player in high school. As Richard Davenport reported, he drew interest from Arkansas, Notre Dame, Virginia Tech, Clemson and Purdue, but ultimately only got a scholarship offer from Arkansas State.

Some of the dynamic here was that Jonathan Adams Jr. is as close to a “legacy” Red Wolf as you get. Not only did he grow up in Jonesboro, but his father Jonathan Adams Sr. was a legendary tailback who finished as A-State’s fourth all-time leading rusher.

If he was close to a sure thing for A-State since 10th grade, as reports indicate, this would have been a deterrent to other programs.

All the same, his Jonesboro High coach Randy Coleman wanted him to stay motivated in college. “Proud coach,” Coleman Tweeted on Saturday.  “Told him on signing day to put a pic of his 2 stars in his locker and keep a chip on his shoulder.”

Treylon Burks, meanwhile, was the superior receiver in high school. As a four star, he had offers from practically every elite program in the nation. There was no doubt of his abilities. Perhaps coaches in other programs thought he was so good that it was worth “wasting” a scholarship offer, even if some believed he was a Razorback lean.

But this is about work at the college, not high school, level.

Right now, if comparing Adams performance vs Kansas State against Burks’ body of work as a freshman, Adams has the upper hand.

But Burks hasn’t hit the field yet in 2020. Judgement should wait until he gets a chance to showcase his improvement from last year (with a better quarterback this time around) against Arkansas’ first two opponents in Georgia and Mississippi State.

While it’s fun to debate these things, this is a unique season in that there is a direct tie between the programs. This fall, the fact that A-State looks like it’s turning into a mid-major “Wide Receiver U” is actually a good thing for Razorback fans.

Iron sharpens iron, and Jerry Jacobs became a better player because of these Red Wolf stars. Looking back, his defensive work in 2019 practices helped prepare the launching pad for Adams’ senior year. Likewise, Jacobs is now helping prep Hog receivers for their own breakout 2020.

Jonathan Adams is the Heisman front runner after today. pic.twitter.com/sqorOnrVtI

Adams is a special talent, enjoying a special fall.

But Burks is on the brink of doing the same.

The debate about Arkansas’ top native son receiver has never been so fun.

Arkansas needs to treat Treylon Burks like A-State treats J Adams. Make him a priority. Adams with one incredible series !!!!!!!!!!!!!!!!!

For more on how Burks is improving, check out our latest post: