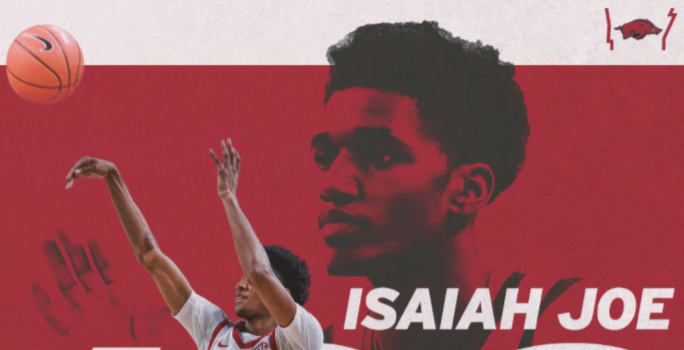 The Razorbacks’ recent six-game losing streak is one of the most disappointing stretches of the Mike Anderson era. One player, though, improved for the most part through that stretch.

That player, Isaiah Joe, just saw all his individual hard work pay off with an impressive feat. Joe, a freshman, tonight set the all-time UA single season record for made three-pointers with 104.

His record-setting performance was part of a thunderous KO punch that the Razorbacks delivered on the road against Vanderbilt in the form of a 36-point win. Joe went four for six on three pointers for 12 points.

He broke the single season mark held by his assistant coach Scotty Thurman:

“Coach Thurman’s a great coach and I wouldn’t have been able to break this record without him. Even though it was his record I broke, he’s still one of those factors to help me reach it.”

Perhaps Joe’s most impressive feat in the last eight games — six losses and two wins — was a 19-point explosion on the road against a Top 5 Kentucky squad. Here are those highlights:

Joe didn’t get enough shots up at the end of the UK game as the Wildcats came roaring back to win. He will need to deliver in both halves in the upcoming SEC Tournament for Arkansas to go on an extended deep run there.

Individually, the biggest record Joe could still break would be the single season record for three-pointers made by an SEC freshman. Kentucky’s Jamal Murray is the current record holder.

Joe’s historic shooting night happened on the same day it was announced that Scotty Thurman’s coach, Nolan Richardson, would likely become the namesake for Bud Walton Arena’s court. Read more about that here: