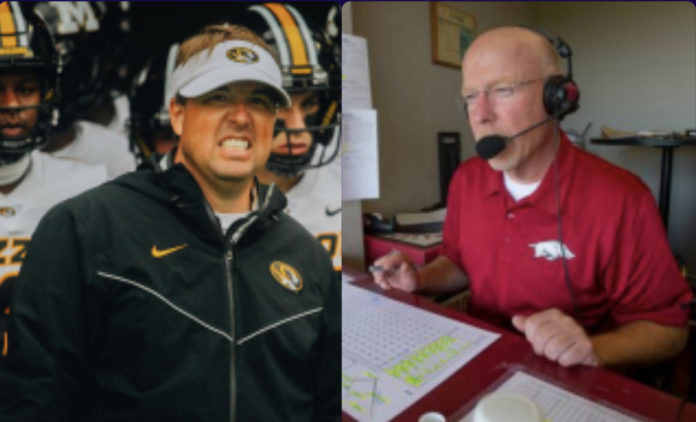 Nowadays, Chuck Barrett is best known as the “voice of the Razorbacks.” He started doing play-by-play with Razorback baseball, but crossed over into football and basketball as well in the last 15 years. The Clarksville native also does post-game interviews with coaches, as did in Maui when he served as a listening ear for Eric Musselman’s fuming about the referees’ calls in Tuesday’s Creighton loss.

“Chuck Barrett has long been the gold standard for sports radio enthusiasts in our state,” Tommy Craft, market manager for Pearson Broadcasting, said this summer. “In many ways Chuck is the one who paved the way for the growth of sports radio in our state,” Craft added.

No doubt, Barrett is the latest in a lineage of play-by-play commentators like Bud Campbell and Paul Eels who became iconic voices of the Razorbacks in the state. The three-time Arkansas Sportscaster of the Year, however, developed his on-air chops with something the legendary Campbell and Eels never did: sports radio.

From 1995 to 2007, Barrett hosted the state-wide talk shot “SportsRap” where he honed the art of the provocative take.

Evidence of that practiced hand came through loud and clear earlier this season when Barrett made one of his weekly appearances on ESPN Arkansas’ the Morning Rush and was asked to share his opinion on his favorite and least favorite SEC campuses to visit.

He praised Nashville (Vanderbilt), Knoxville (Tennessee) when the Vols are rolling and added Tuscaloosa (Alabama) and Athens (Georgia) “do it in a way that nobody else does,” and even gave some love to Baton Rouge (LSU).

But, Barrett continued, “I guess if I had to pick one place I didn’t like going, it would be Columbia (Missouri).”

Barrett mentioned that the frequent cold weather during the sports he calls for the northernmost SEC campus is one reason, but was only heating up at that point.

“Guys, I got to tell you, maybe I’m the only one but I’ve developed a sincere dislike of Missouri,” he told co-hosts Tye Richardson and Tommy Craft.

“I don’t think they take their sports seriously. I don’t think “it [just] means more.” They act like they’re a little bit better than those of us in the southern corridor, let’s just put it that way. And I’ve just never cared for them.”

Barrett added that he’s disappointed in the level of sports facilities development he has seen from Missouri in the decade the Tigers have been in the SEC.

“I don’t think they’ve progressed very much. When I see their facilities, and I’m sure they’ve done some things here and there, but there’s not anything magnificent. There’s no Baum Stadium [Arkansas’ baseball stadium], there’s no Fred Smith Football Center. They don’t have things like that, and I’ve wondered why because they got plenty of cash rolling in now.”

Barrett made sure his listeners knew he wasn’t ragging on any specific Mizzou alumni here (Lord knows Arkansas football fans appreciate Bob Holt and Barry Odom), but that “I’m just saying I don’t care for their program.”

After a three-and-out on its first drive, Arkansas answered Missouri’s 40-yard field goal with a beautiful 9-play, 75-yard drive that ended with a 3-yard touchdown run by KJ Jefferson.

Missouri used back-to-back long passes to wide open receivers to set up a 3-yard touchdown run of its own and then, after another 3-and-out by the Razorbacks, connected on a deep pass to get the Tigers in scoring position again as time expired in the first quarter.

The Tigers needed only one play to finish their drive with a touchdown, scoring on a 9-yard run just 4 seconds into the quarter.

Arkansas answered with a touchdown of its own. Matt Landers came down with an incredibly tough catch in the end zone for a 27-yard touchdown. He’s up to 68 yards on three receptions.

After a red zone stop to limit the Tigers to another field goal, the Razorbacks put together an impressive 11-play, 75-yard touchdown that featured a couple of third-down conversions and some beautiful play calls by Kendal Briles. The touchdown came on one of those plays, as Rocket Sanders was wide open for an 8-yard touchdown catch.

That came with 1:35 left in the half. The Tigers had a chance to get something before halftime to start a two-for-one, but the Razorbacks stuffed them on a third-and-1 play near midfield. Instead of going for it, they punted it away.

Missouri Opens 2nd Half with TD

The Tigers converted a third-and-10 to prevent a 3-and-out and a fourth down to avoid a turnover on downs near midfield. They took advantage of it by capping the drive with a 23-yard touchdown pass from Cook to Luther Burden, who broke a tackle by Quincey McAdoo on the play. Missouri went for 2 afterward, but Hudson Clark intercepted the attempt.

KJ Jefferson’s fourth interception of the season gave the Tigers excellent field position and they appeared to score on a run, but it was wiped out by a holding penalty. The Razorbacks ended up holding them to a short field goal.

After that, the Razorbacks put together a decent drive that featured a third-and-13 conversion on a screen pass to Sanders. The drive stalled inside the 30, though, and Arkansas had to settle for a 46-yard field goal by Cam Little.

With the help of a dropped pass, Arkansas’ defense forced its first three-and-out of the game. The Razorbacks are now in Missouri territory as they enter the fourth quarter.

The Razorbacks marched all the way down the field and a pass interference in the end zone gave them a first down at the 2. However, they couldn’t score on three straight plays – including a direct snap to Trey Knox under center. Arkansas opted to take the points on a 20-yard field goal by Little.

After a three-and-out by Arkansas, Reid Bauer’s punt was partially blocked to give Missouri the ball at the Arkansas 35. Thanks to a huge third-down sack by Drew Sanders, though, forced the Tigers to try a long field goal and Mevis’ 55-yard attempt was wide right.

Arkansas failed to get a first down after the missed field goal and chose to punt it away with about three minutes left. The Razorbacks had a chance to get it back with a three-and-out, but Cook connected with Mekhi Miller for a 22-yard gain. That allowed Missouri to run the clock down to 14 seconds left before Arkansas got the ball back.

That was enough time for just a handful of plays and a desperation lateral play failed.

How to Watch Arkansas vs Missouri

ESPN FPI: Arkansas has a 55.8% chance to win (down 8.8 percentage points from preseason projection)

Barrett next gets to visit his least favorite SEC destination this weekend for the regular season finale between the Tigers (5-6, 2-5 in SEC) and Razorbacks (6-5, 3-4).

The Missouri football program its third year under Eli Drinkwitz has some good things going for it.  The Tigers, for instance, lead the SEC in tackles for loss with 80, or more than seven per game.

“They’ve done a really good job defensively have changed tremendously this year. They’re playing great,” Arkansas football coach Sam Pittman said earlier this week. “Offensively, they’re known for a big, physical offensive line. They love to run the stretch play. They run it well. Their quarterback now is running the ball a lot more than he did early in the year and running it well. I really like their wide receiver group. Very, very talented. They can catch one-on-one passes.”

Plus, when it comes to losing, Missouri does it better than almost anybody else.

Outside of a 42-point shellacking to the Vols, the Tigers’ other four SEC losses have been one-possession games (including a 26-22 loss to the defending champs and No. 1 Georgia Bulldogs). That’s one more one-possession loss this season than the Hogs have.

While both teams may appear in the same general .500-ish vicinity this season, Arkansas’ future feels less in doubt because of the success of last year’s 9-win season and guaranteed bowl return this season. Drinkwitz’s team, meanwhile, won only 6 games last season including its last two vs Arkansas and Army.

Missouri seems much farther away from returning to the SEC Championship Game, where it appeared twice at the start of its SEC era, than Arkansas.

A lot of that has to do with the coaches for respective programs.

“Their only prayer of being good in this conference is a coach like Gary Pinkel,” Barrett said. “Missouri in the trenches right now is… they’re nowhere close and they need an old-school guy to come in there and reemphasize what wins games.”

Listen to Barrett opine on Missouri in full starting at 20:25 below:

More from Sam Pittman on Arkansas vs Missouri

“We haven’t beaten them there ever since we’ve been in the SEC. So, obviously there are challenges there. They’re playing extremely well. Very good defensive football team. They’ve going to make you throw the football. They’re going to out-number you in the box and make you throw the football. Their front-four, really their entire defense, they’ve got really good corners that are able to play man. One high safety. Very aggressive, very physical. They’ve done a really good job defensively have changed tremendously this year. They’re playing great.”

“Offensively, they’re known for a big, physical offensive line. They love to run the stretch play. They run it well. Their quarterback now is running the ball a lot more than he did early in the year and running it well. I really like their wide receiver group. Very, very talented. They can catch one-on-one passes. They’re a little bit like us. They’ve lost some very close games to put them where they are record wise very similar to ours.”

“I know they’re going to be fired up to get bowl eligibility, and again like I said, we haven’t won up there. So, a lot of things for us to play for too to continue to rise so our bowl eligibility opens up more bowls for us. But, the bottom line is, Missouri is a rivalry game and we need to go play well against a very good football team.”