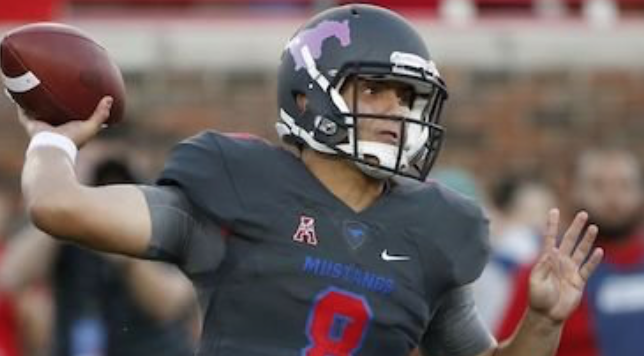 Arkansas now has a frontrunner for its starting quarterback in the 2019 season.

You’ll see an awful lot of tight spirals over the middle in these highlights:

However, Hicks’ running ability is a concern:

Fortunately, Arkansas will have more dangerous dual-threat quarterbacks waiting in the wings, headlined by 2019 signee KJ Jefferson. Expect to see some running QB packages in 2019 featuring the likes of Jefferson, Connor Noland and John Stephen Jones to keep defenses off balance.

Hicks’ advantage moving into the spring is that he’ll likely know Morris’ RPO-based offense better than any players on campus, as Razorback reporter Otis Kirk points out.

Hicks, who visited Arkansas this weekend, told Otis Kirk about the pros of coming to Arkansas: “Just knowing the staff, knowing the offense… I have dreamed about playing in the SEC. Playing in this league. They had some talent there this year and just couldn’t get it done all the time, but there’s obviously talent there particularly on offense.”

Louisville also recruited Hicks, but Hicks liked being closer to his Waco home. Plus, as Kirk explains in the interview below, the SEC is a huge draw for modern Texas athletes. The conference gets more exposure than ever in the state with the inclusion of Texas A&M and Arkansas’ consistent games in the DFW area.

Though Hicks will play only one year for Arkansas, that season will allow the coaches to bring along KJ Jefferson more slowly. Jefferson, after all, won’t arrive onto campus until summer.

With Hicks on board, Otis Kirk predicts that KJ Jefferson will play up to four games — but ultimately be redshirted. “If he proves to be better or needs to play more, he can.”

“But I think [Hicks] give them a guy going into the season with a lot of experience in this offense. It doesn’t force them to rush any of those other guys into action. If something happens, and one of those guys beats out Ben, then that’s just better” for the coaches.

Ben Hicks was SMU’s all-time leader in passing yards (9,081), passing touchdowns (71), total offense (8,977), completions (718), and touchdowns responsible for (74). He also threw a total of 29 interceptions, at one point getting the nickname “Pick 6 Hicks” after throwing a game-losing interception returned for a touchdown.

Hicks transferred because it wasn’t clear he would win the starting job under SMU coach Sonny Dykes, who took over for Chad Morris in 2017.

Want to hear from the man himself? Check out the interview below!