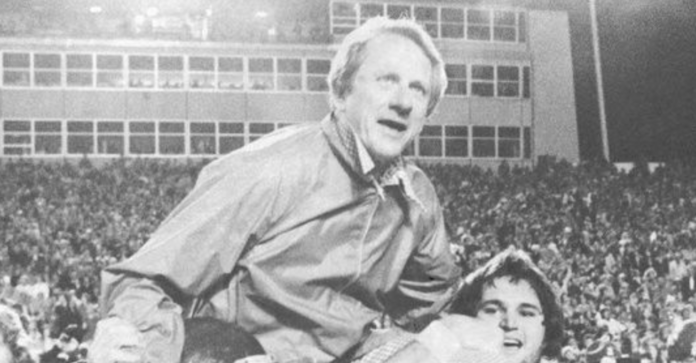 For Arkansas’ football program to begin to pull itself out of the abyss of the Southeastern Conference and work its way at least into the middle of the pack below the traditional powerhouses, it must return to beating the two Mississippi schools on a more regular basis. First-year head coach Sam Pittman achieved that goal, at least for one season, with the wins over Mississippi State and Ole Miss in the Razorbacks’ first four games of 2020.

To make a move further up the ladder, the Hogs need to reverse a bad trend against a Missouri football program that has somehow won seven of 10 matchups all-time over Arkansas, including a 5-1 record since the Tigers became the Hogs’ annual season-ending foe in 2014. The Hogs and Tigers play this year in Columbia, Mo., on Nov. 28.

And, finally, Arkansas must get back to winning its share of games against Texas A&M, a program which never should be confused with the Texas Longhorns but seemingly has filled that Texas role of late on the Hogs’ schedule, often in heartbreaking fashion, in winning the last eight meetings.

This week in a press conference, Sam Pittman alluded to how much this winning streak has been weighing on the minds of Razorback fans by speculating that the Aggies are the Hogs’ No. 1 SEC rival: “I’d say A&M was probably two in the list of rivalries behind Texas. I’d assume, I don’t know, but that’s kind of the feeling you get.”

It hasn’t mattered whether this lopsided rivalry is contested in Bryan-College Station, where this Saturday night’s game will be and where this current streak first started in 2012, or in Arlington, Texas, where the series will return in 2021 as the Southwest Conference Classic, assuming COVID’s canned by then.

Bobby Petrino handled his three outings with A&M after the old Southwest Conference rivals resumed their series in 2009 in Jerry Jones’ then brand-spankin’-new Cowboys Stadium. Yet since Petrino’s unfortunate departure the Hogs haven’t managed a win against A&M, even with at least three of those games seemingly in their grasp in the fourth quarter.

The Aggies have been making up for struggling back in the ancient days of Arkansas football glory – that period of the time when Arkansas joined Texas as the dominant teams in the SWC, both second only to Alabama in total wins in the 1960s, and when both routinely whipped everyone most seasons. Frank Broyles’ first win at Arkansas was a 12-7 upset victory at College Station in 1958 after he’d started 0-6. For the next decade, Broyles didn’t lose a game to the Aggies.

After Broyles lost one to Texas A&M in 1967, the Aggies’ lone season of ‘60 glory, he won another four straight. Successor Lou Holtz lost only once to A&M, in 1983, his last year. Even when Texas A&M had recruited its way to Cotton Bowl contender in the 1980s under Jackie Sherrill, Arkansas still won its share (at home, mostly, with one wild 23-22 road win in 1989 to clinch a second-straight Cotton Bowl berth). When the Razorbacks departed the SWC, they held a 44-26 edge all-time in the series.

Over the years, whether as the underdog or as a Top 10 team eyeing a league title, Arkansas often found a way to beat A&M – or, from the Aggies’ perspective, A&M found a way to beat itself. Before Barry Odom was rushing three and dropping eight on the likes of Mississippi State to stifle the Air Raid, the 1986 defensive coordinator, Fred Goldsmith, was going one better, rushing TWO and dropping nine to stymie Kevin Murray and the Aggies in Little Rock. That ‘86 A&M was loaded with future NFL running backs, linemen and receivers and still managed just 10 points at War Memorial Stadium, in front of TV cameras, in one of the monumental upsets of former Razorback coach Ken Hatfield’s tenure.

Going back a decade, but staying on that same field, Hogs fans of my age would still recall Arkansas putting the clamps on No. 2-ranked Texas A&M’s wishbone and eventually breaking through with a big passing game to rout the overconfident Aggies 31-6 late in 1975. The genius Arkansas defensive coordinator who solved the wishbone that day was Jimmy Johnson, later to win championships in college (Miami) and the NFL (Dallas).

After that nationally televised Hog destruction of the Aggies on Dec. 6, 1975, the next few seasons marked a period when A&M’s expectations soared and the Aggies regularly won in February recruiting wars in Texas, but still found a way to be out of the Cotton Bowl chase by October. After enough frustration with that way of life, A&M became one of the first big-time programs to axe a head coach in midseason when it loosed the wishbone’s legendary “inventor,” Emory Bellard.

Bellard’s replacement, Tom Wilson, went backward, so Jackie Sherrill was lured away from Pitt, where he’d coached Dan Marino and other superstars, with a then record-setting six-year  $1.7 million deal,the 1980s version of Jimbo Fisher money. Until the NCAA began looking around in the late 1980s, like it did with all the SWC, Sherrill had the Aggies regularly in the Cotton Bowl and around the top 10. Then R.C. Slocum moved up from defensive coordinator to replace Sherrill and kept A&M in contention, even managing an 11-0 regular season in 1993 that was spoiled in a Cotton Bowl loss to Notre Dame.

But A&M fan expectations were too much even for Slocum to survive a slide to 6-6 earlier this century, and A&M paid a price on the recruiting front in hiring Dennis Franchione away from Alabama (he only left there because Alabama was on or about to go on probation). When Fran failed, the Aggie faithful then turned to NFL coach Mike Sherman, who recruited better than he could coach. He couldn’t hold leads like a 35-17 halftime edge on Arkansas and Petrino in 2011, but he left some quality players for the next hire, Kevin Sumlin.

Of course, one of those players was a former 3-star high school quarterback named Johnny Manziel, who would set the world on fire as a redshirt freshman in 2012.

With the boost from Manziel’s Heisman Trophy season, Aggie expectations and arrogance soared. It seems the better the recruiting classes for Sumlin, and the higher expectations, the worse the performance was on the field for A&M – except against Arkansas. Sumlin’s 2014 team was about as backed up against the wall as any could be, down 28-14, and lucky to not be 35-14 down if not for an official flagging a Razorback lineman for alleged trip, before rallying to win in overtime.

Sumlin and the Aggies scored more OT wins over Bret Bielema’s Hogs in 2015 and 2017. But Sumlin’s M.O. was starting fast and fading halfway into the season, so A&M eventually punted him.

Chad Morris was a former Aggie himself (student, not a player), and his two Razorback teams were awful, but somehow they managed to compete mightily in the two games with A&M and its $75 million coach, Jimbo Fisher, in Arlington. In both cases, Arkansas seemed to be in the exact position A&M had been in those Sumlin saves, but failed to connect in the final moments to pull out wins. The question most onlookers had, though, was how could either of those games have been that close?

Looking at the Arkansas-Texas A&M rivalry from a Texan perspective:

A&M’s 2020 squad boasts a much improved quarterback in Kevin Mond, who plays his best at home and has seemingly been at A&M forever, and a world-class running back in Isaiah Spiller. Throw in perhaps the program’s best offensive line since its fabulous 2012 bunch who blocked for Manziel, and it would seem like Saturday’s tilt vs Arkansas shouldn’t be close, either. Barry Odom could work yet another defensive miracle, sure, but Arkansas’s offense hasn’t been able to mount a basic running attack through four games.

A&M’s not great on defense, certainly not in the tradition of those Wrecking Crew defenses in Aggieland of the aforementioned Sherrill-Slocum years. But Arkansas, because of its talent and experience limitations in its offensive line, didn’t muster much consistency against Ole Miss’ defense, which may have the West Division’s worst talent on that side of the ball. The Hogs’ O-line has, surprisingly, protected quarterback Feleipe Franks well through four games.

He’s had time, sometimes almost too much, with which he sometimes still can’t spot an open receiver. That may be on the particular receiver, frankly. At this juncture, some wideouts seem more adept at finding space than others.

A track meet might ensue at Kyle Field, which figures to be loud and likely rocking more than the prescribed 25 percent maximum capacity in attendance. If Arkansas can’t begin to find its running game by this week, and A&M keeps up the same kind of rushing attack with which it’s mauled every opponent save Alabama, then the Hogs’ long losing streak to the Aggies will extend into the 2020s too.

Six Key Questions about the Arkansas Offense in 2021