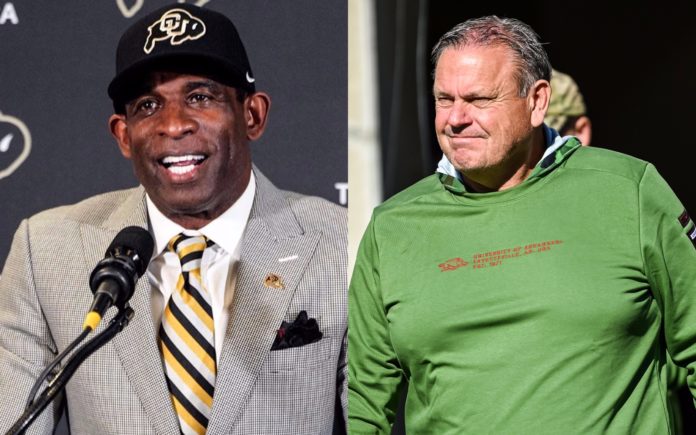 Arkansas’ blazing start to the transfer portal season was doused with gasoline yet again Tuesday evening when coveted DII prospect Isaac TeSlaa called the Hogs over offers from more than a dozen Power 5 programs.

Despite the influx of talent headlining the 2023 roster, head coach Sam Pittman says Arkansas is far from wrapping up its recruiting efforts — something that may come as deja vu for Razorback fans.

With that in mind, and plenty of time to fill any holes left ahead of the Razorbacks’ opener vs. Western Carolina on Sept. 2, let’s take a look at some potential fits for the remaining spots in the 2023 transfer class.

Now, the way I see it, the Arkansas football staff has narrowed its search on the offensive side of the ball to two positions – tight end and wide receiver.

The running back room has been the anchor of this Razorback roster for the past two seasons and that won’t be changing in 2023 with everyone in the group set to return, plus Criswell’s commitment likely shores up a quarterback room that was deathly thin in 2022.

That leaves the offensive line as the only other question mark, as starters Ricky Stromberg, Dalton Wagner and Luke Jones are moving on. Even with the addition of Braun and a wealth of talented young linemen, Pittman said he’d like to add another center from the portal. However, things have been pretty quiet on that front and whomever Arkansas lands will likely be a backup option, as Beaux Limmer is projected to slide over and play center next season.

When evaluating these fits, a number of factors were considered, including previous ties to Arkansas and/or Pittman, remaining eligibility, visits (or plans to visit) Fayetteville, etc.

Though I did my best to thoroughly evaluate Arkansas’ options, this list isn’t necessarily comprehensive of every possibility, but rather a look at what I should be some of the staff’s top prospects for additions.

Perhaps no group has been hit harder this offseason season than Kenny Guiton’s wide receiver room.

After racking up more than 3,000 yards through the air in 2022, the Hogs are set to return just 21% of their production next year — with the majority of that coming out of the backfield — due to Ketron Jackson’s surprise entry into the portal and Jadon Haselwood’s decision to test his luck in the NFL Draft.

Though redshirt sophomore Bryce Stephens saw an increased role and freshmen Sam M’Bake and Isaiah Sategna flashed in practice throughout their debut seasons, Guiton is undoubtedly looking to bolster the group via the portal after bringing in just one high school signee in the 2023 class.

The Hogs have already matched that number by landing Texas A&M-Commerce wideout Andrew Armstrong last month and Hillsdale College standout Isaac TeSlaa on Tuesday, but they might not be done.

That said, a Monday morning miss on Oregon transfer Dont’e Thornton, who opted for Tennessee, leaves Guiton with limited options.

The first, and most anticipated, option would be NFL legacy Arland Bruce IV. The third-highest rated member of Iowa’s top-25 signing class in 2021 hauled in 44 passes for 396 yards and two touchdowns while adding 116 yards (5.5-yard average) and four scores on the ground in two seasons with the Hawkeyes.

Though his college numbers thus far are dwarfed by those of his uncle, NFL Hall of Famer Isaac Bruce, the former four-star recruit migrating south to Kendal Briles’ offense could provide both sides the spark they were missing in 2022.

Another name to keep an eye on is South Florida transfer Xavier Weaver, who took an official visit to Fayetteville on Jan. 5. After landing quarterback Cade Fortin as a walk-on last offseason, the Razorbacks have already poached one of the talented former Bulls to enter the portal, with linebacker Antonio Grier Jr. confirming his pledge to Arkansas over the weekend, and Weaver would provide another massive boost to a position of need.

The 6-foot-1, 180-pound wideout earned second-team All-AAC honors in 2022, posting 53 catches for 718 yards and six touchdowns in just nine games. As well as stating that a reunion with Grier would be a “blessing,” Weaver says he took notice of what Guiton was able to do with Haselwood and Landers in their lone seasons with the Hogs — all positive signs for the staff’s plan to reinvigorate the wide receiver room.

In addition to their top four wide receivers, the Razorbacks appear set to enter 2023 down at least their two leading pass catchers out of the tight end room.

Among many others, one apparent shift in philosophy under Sam Pittman has been the minimized role of tight ends within the offense — more specifically in the passing game.

Trey Knox appeared to have been nearing “exception to the rule” status with a strong 2022 in which he had 26 receptions for nearly 300 yards and five touchdowns, but he shocked Razorback fans with his decision to follow former tight ends coach Dowell Loggains to South Carolina.

Tyrus Washington also provided some relief when he burst onto the scene with a 17-yard touchdown catch in the Razorbacks’ thrilling Liberty Bowl win over Kansas.

Though the talent level of the group is arguably as strong as any on the roster, new tight ends coach Morgan Turner needs to find experience in the portal. The Razorback staff brought in two guys with the potential to fill that role, but North Texas transfer Jake Roberts’ Monday night announcement that he’d be heading to Baylor takes him out of the mix.

The Georgia native chose Notre Dame over offers from Alabama, Arkansas, Auburn, Florida, Georgia, LSU, Michigan, Ohio State, Texas and many more after being rated as ESPN’s No. 1 tight end — and No. 51 overall — in the 2021 class.

Berrong opened his career on a high note, appearing in three games as a true freshman before missing the majority of his first two years with a torn ACL. While he didn’t post any receiving stats with the Irish, four appearances and two years behind projected first-round pick Michael Mayer has him poised to be the veteran presence Arkansas is looking to add.

Along the same vein of a guy who hasn’t seen much production in the pass game is yet another USF prospect, as Chris Carter — not to be confused with NFL Hall of Famer Cris Carter — announced he’d be entering the portal Tuesday afternoon.

Despite just 15 receptions for 89 yards and two touchdowns across five years in South Florida, appearances in 44 games with the Bulls since 2018 means Carter offers a wealth of game experience to a room that’s sorely lacking in that regard.

A much longer shot is former five-star and top-10 player in the 2020 class Arik Gilbert, who’s looking for his third home after stints with LSU and Georgia. The Marietta, Ga., native returned home to Kirby Smart’s Bulldogs after one season in Baton Rouge, but off-field issues limited him to just three appearances in two years with the team.

While his rap sheet certainly provides reasons for concern after being somewhat of a wild card with his previous SEC opportunities, Gilbert’s talent is undeniable, and the staff would be hard-pressed to reject the 6-foot-5, 255-pounder’s services should he express interest in the Hogs.

A more likely transfer tight end from Georgia is Brett Seither, a reserve for the Bulldogs who has played just 116 offensive snaps over the last four years and caught only four passes for 54 yards in his career. Much like the aforementioned Carter, that would likely make him a depth piece and veteran presence for the Razorbacks rather than a go-to option.

It’s unknown whether Seither would be open to such a move — he may prefer dropping down a level and having a clear path to playing time — but he and Pittman overlapped for one year at Georgia, so there is a connection.

More coverage of Arkansas football and the transfer portal from BoAS…