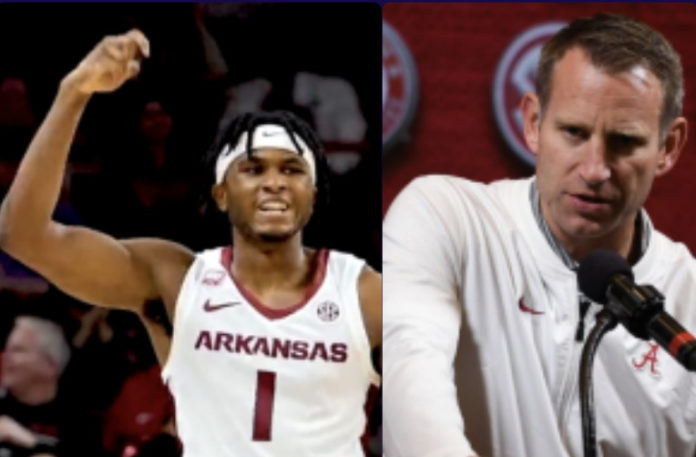 Unlike most sane sports fans this time of year, I spent Saturday watching SEC basketball teams play in non-conference games.

Being high on those Hogs will make you do the strangest things, I suppose.  I mainlined the Arkansas basketball blowout win against San Jose State right into the veins.  When your team plays a magnificent game, you just want to keep chasing the dragon.

There was so much that went right.  Nick Smith Jr.’s true first game back again demonstrated his ability to score at all three levels and opened up the floor for the other players.  Your top recruit returning from injury and putting up 16 points and 5 assists in 24 minutes would typically be the story of the game.  Or perhaps reigning SEC Player of the Week, Ricky Council IV, scoring 17 points on 5 of 6 shooting.  Or Jalen Graham appearing from seemingly nowhere to put on a low post clinic in the second half.  All these performances were overshadowed by Trevon Brazile’s one missed field goal, 23-point game.

But the best story may have been the return of Davonte Davis.  In the second half Devo defended everyone from the point guard to the power forward and helped limit one of other team’s best players to five points.  Devo’s no-look pass to a streaking IV for a thunderous right hand slam by Council IV was the assist of the game.  It narrowly beat out Nick Smith Jr.’s “Am I gonna nail this floater in your face or lob it to Anthony Black?” dime.

Musselman has integrated the star freshmen with the transfers and has them playing hard, unselfish basketball that is a joy to watch.  The Hogs have at least four players who could be the best player on a deep tournament team.  Go back and watch walk-on Cade Arbogast’s three-pointer.  The bench looked like they just won the national championship as Bud Walton rocked the entire second half of a blow-out game in early December.

Best yet, it seems the team’s attitude is exactly on point for a sustained run of success. Afterward, each of the Razorbacks sounded like a mini-Musselman.

So, full of hope for the season, I turned my attention to upcoming SEC opponents. Here are some initial takeaways:

Vanderbilt squeaked by Wofford at home.  Vanderbilt would be odds on favorites to win Wofford’s Southern Conference.  Unfortunately for the Commodores they play in the Southeastern Conference.  Looks to be a long year for the best dressed coaching staff in the SEC.  Coach Jerrry Stackhouse’s continued sartorial splendor makes tuning into Vanderbilt games slightly less painful.  Unsurprisingly, the Commodores really miss Scottie Pippen Jr.

Texas A&M’s Buzz Williams is no slouch in the fashion department, although his three-piece suits should be retired.  They are far too constricting for a coach that likes to spend more time stomping on the floor than Eric Musselman.  An impressive feat, to be sure.  A&M seems to have about 12 guards on their team.  They play the same aggressive, trapping, clawing defense, but lack the straw that stirred the drink, Quenton Jackson, from last year’s squad.  They do return point guard, Wade Taylor, who killed Arkansas last year.  The Aggies lost to a well-coached Boise State team that was making the extra pass and knocking down threes.  Not sure fans in College Station should expect an improvement over last year’s NIT tournament appearance.

The Aggies game, which served as a tribute for former ESPN sportscaster Stuart Scott, reminded me it would be much better if the sports announcing world retired the phrase, “Oh by the way”?  We should honor his memory by retiring one of the legendary SportsCenter announcer’s catch phrase.

Mississippi State blew out Mississippi Valley State in the morgue that is wherever Mississippi State plays basketball.  MSU has something new in coach Chris Jans and something old in post player Tolu Smith.  Smith’s effective, if somewhat lumbering, post-game gave Arkansas real problems last year.  I’m glad we have both Mitchell Brothers for when we face off against them this year.

You may remember Jans from New Mexico State in last year’s NCAA Tournament.  He is another SEC coach who favors defense that walks up to (and arguably over) the line of fouling every offensive player at all times.  Mississippi State entered the AP Top-25 this week at 23.  Seems a bit high to me, but definitely a team to be wary of in conference play.  Then again, they are ranked #5 in the NET rankings, so what do I know?

Ole Miss and University of Memphis squared off in Memphis. Ole Miss runs a lot one-three-one zone trap on defense and oftentimes something of TBD on offense.  Ole Miss couldn’t keep the Tigers off the offensive glass down the stretch.  The Rebels missed transfer Jayveous McKinnis, last year’s SWAC defensive player of the year at Jackson State University. Disappointing loss for the Rebels.  Ole Miss isn’t a great team, but it was a fun game to watch.  Great atmosphere and the student band rocked.  At one point they played “When I Come Around” by Green Day.  This made me feel very happy, then very old.  Regardless, a good band is always superior to piped-in music for atmosphere.

(For those of you who want to relive those heady days of getting drunk at your older brother’s punk rock shows at Vino’s in Little Rock here is the “When I Come Around’ video. Jason White, Green Day guitarist and Little Rock native, pops up repeatedly in the video.)

If I were king of this old crazy world, the University of Memphis would go back to being Memphis State University just for the jerseys.  Ole Miss coach Kermit Davis is the polar opposite of Stackhouse; he prefers some kind of Ole Miss fishing shirt/windbreaker? to well-tailored suits. Sadly, my attempts at finding pictorial evidence of said fishing shirt monstrosity failed. Maybe Davis burned it after the game, which would be understandable for multiple reasons.

Alabama struggled a bit more against South Dakota State than the Hogs but had too much talent (and friendly refs) for the Jackrabbits down the stretch.  The game was closer than the 78-65 final score indicated.  Alabama is ranked one spot ahead of Arkansas (#8 and #9 respectively) in this week’s AP Top 25 poll.  They have a big game coming up Saturday at the top ranked Houston Cougars.  It is a game Alabama could absolutely steal if they can limit Houston’s points off turnovers and make some three-point shots.  This may be the least impressive bit of analysis ever.  The point is, I fear no team this season.

I will be grudgingly rooting for Nate Oats’ team to upset Houston.  Typing that sentence makes me throw up in my mouth a little.  It is almost as bad as having to root for Kentucky to beat Gonzaga, which they did not.  I took a long shower after Kentucky’s loss and still felt queasy.  As Dante taught us, rooting for John Calipari is the sixth circle of hell.

Ok, so maybe I did enjoy watching those games and looking forward to Arkansas basketball rampaging through the SEC.

Will the Hogs win every game the rest of the season? Ok, maybe not.  But is it possible?

Hope is a good thing, maybe the best of things.