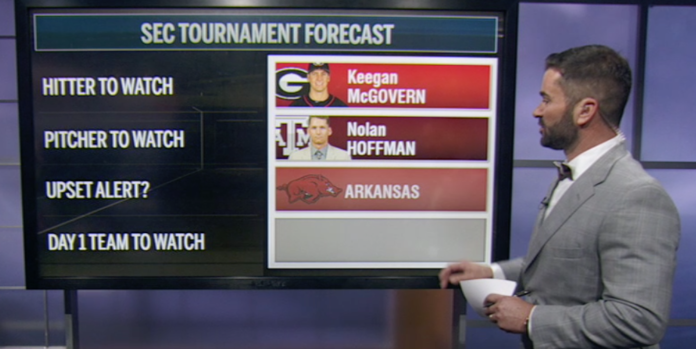 Despite dropping a couple games at Texas A&M to wrap the regular season, the No. 4 Arkansas had gotten off to a hot enough start to claim its second-straight SEC West division title on Saturday afternoon. With a 20-10 conference record, the Hogs share the division title with Mississippi State.

Inside, they know they are clearly the better team after taking the Bulldogs out with the garbage to sweep then-No. 2 Mississippi State a month ago. This is the the sixth division title in program history and fifth for head coach Dave Van Horn.

Tiebreaker rules and Arkansas’ glorious sweep of Mississippi State, the Hogs will have the No. 2 seed for the 2019 SEC Tournament. It gets a bye through Tuesday’s first-round, single-elimination games. Arkansas next plays on Wednesday at 1 pm. Its opponent will be the winner of seventh-seeded Ole Miss and 10th-seeded Missouri.

Arkansas had a helluva regular season, finishing with an overall 40-15 record.

For the first time since 2010, it won 40 or more games in the regular season. It hadn’t won 40 games so quickly since 1989. The 20 conference wins remain only the second instance in school history that the Razorbacks have won 20 or more games in league play and first under head coach Dave Van Horn.

The Razorbacks won 11 three-game series this season, seven in SEC play, including three sweeps. Before last weekend’s hiccup against Texas A&M, they had won four straight conference series, including sweeps over current No. 5 Mississippi State and Tennessee.

Arkansas baseball now enters this week’s tournament in Hoover, Ala. seeking its first SEC Tournament championship in program history. While Hog fans, players and coaches remain optimistic they can at last break through and make the state proud with this historic championship, it will be interesting to see if certain SEC insiders give Arkansas props.

Take David Delluci, the former Ole Miss All-SEC player who has likely been steeped in all things anti-Hog since his days growing up Baton Rouge, La. Last year at this time, on the SEC Network’s SEC Now show, Delluci targeted Arkansas as the team most likely to be upset in this SEC Tournament.

“It has not played very good on the road, they need to bolster their road winning,” he said, alluding to Arkansas baseball’s 12-9 road record this season. “They going to get the winner of South Carolina and Missouri. South Carolina is on fire and Missouri has a tremendous pitching staff.”

“Arkansas’ batters didn’t show up in Game 3, so they’ve got to be ready for those pitchers.”

“It is interesting,” host Dari Nowkhah chimed in. “For years we said the same thing about their basketball team — they can’t really win on the road but they can win at home. Seems to be replaying a little bit in baseball here.”

Speaking of those hitters

Sophomore Matt Goodheart leads the Razorbacks into the tournament offensively. He’s hitting .352 and he’s one of six Razorbacks hitting .300 or higher heading into the SEC Tournament. Heston Kjerstad, Casey Martin, Jack Kenley, Dominic Fletcher and Trevor Ezell all are hitting .300 or higher and have 40 or more RBIs. Third-baseman Jacob Nesbit is only hitting .258, but has 41 RBIs, tying for the fifth-highest total on the team.

Razorback pitchers may be peaking at the right time going into the SEC Tournament. Led by redshirt junior right-hander Isaiah Campbell, the Razorback pitching staff has given up two earned runs or less in three of its last four games and struck out 523 batters this year, which ranks sixth in the SEC.

Campbell picked up his 10th win of the season in Game 1 against Texas A&M on Thursday. That makes him one of three pitchers in the conference with 10 or more wins. Campbell is only the second Arkansas pitcher in the last six years to win 10 or more games in a season and he’s three strikeouts away from topping 100 for the year. He has 10 quality starts in his last 11 outings and has yet to give up more than three earned runs or walk more than three in a single appearance.

The most tournament wins for Arkansas came in 1999 when it won four games before falling to the Crimson Tide in the championship game. Head coach, Dave Van Horn is 21-25 in 14 SEC Tournament appearances.

The Razorbacks have made four SEC Tournament championship game appearances in their history, finishing runner-up in 1998 to Auburn, in 1999 to Alabama, in 2007 to Vanderbilt, and most recently, in 2017 to LSU.

Last year, Arkansas baseball earned the four-seed for the SEC Tournament and reached the semifinals after wins over South Carolina and Florida. Arkansas fell a game short of its fifth finals appearance after falling to tournament runner-up LSU, 2-1. Still, though, it used that momentum to claim a top-eight national seed for the NCAA Tournament the next week.