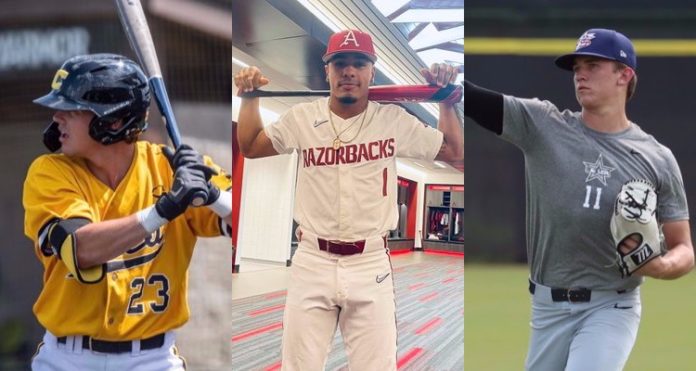 The junior college ranks have been kind to Arkansas in recent years and Dave Van Horn is going back to that well again to help reload his 2023 roster.

A whopping 10 JUCO players are currently committed to the Razorbacks, which is a high number even for a team that featured three regular starters from that level en route to the College World Series.

Those three Razorbacks — shortstop Jalen Battles, designated hitter Brady Slavens and center fielder Braydon Webb — are likely gone, with the latter out of eligibility and the other two off to the MLB Draft, and Van Horn’s efforts to replace them brought him to a familiar recruiting ground in an era of college sports dominated by the transfer portal.

Even though it’s an abnormally large number, some of them are “really, really good students,” Van Horn said, indicating they might receive academic money and not use up any of the Razorbacks’ 11.7 scholarships, plus most of them were really good players at that level.

“It’s just kind of worked,” Van Horn said. “If you look at the transfers we have coming in, first-team All-American, second-team All-American, these guys, they did some damage and they did it over a period of time. It just seemed to be a good fit for us this year.”

Interestingly, seven of the 10 players are classified as infielders. Van Horn previously said at a Swatter’s Club meeting that several of them are good athletes and capable of playing elsewhere, like the outfield, and mentioned that again Thursday.

As is usually the case, Van Horn and his staff could be sweating it out on a few players during the 2022 MLB Draft because they have the option to skip high school and jump straight to the pros.

However, a handful of those incoming freshmen are already enrolled in classes and adjusting to college life. Van Horn didn’t reveal any names, but a source told Best of Arkansas Sports that the group includes infielder Easton Swofford, left-handers Parker Coil and Sean Fitzpatrick, and right-handers Josh Hyneman and Gage Wood.

“Most of them are coming around and doing their orientation,” Van Horn said. “Some are here right now taking some summer school. Once they do that, they can work with our strength and conditioning coach. We can’t work with them, but they’re working on getting stronger. They’re getting acclimated, they’re in the locker room.”

Just being on campus is no guarantee they won’t still get drafted and sign professionally, but it is encouraging to those who hope they end up in an Arkansas uniform.

With the draft now permanently slashed in half to 20 rounds, there is a greater emphasis on teams actually signing the players they draft. Certain current rules make it extremely likely that players taken in the first 10 rounds will ultimately sign, and those taken in the back half also still have a shot at six-figure signing bonuses.

There’s a lot of money being thrown around and Van Horn said most of his conversations leading up to the draft are with his incoming freshmen rather than current players because of that.

Of the signees, outfielder Mason Neville, infielder Jayson Jones and right-hander Cole Phillips — as well as Coll from the JUCO ranks — are the most sought-after prospects by professional scouts.

Whether or not any of them actually end up on campus will remain a mystery until the MLB Draft, which is scheduled for July 17-19 in Los Angeles, or potentially until the Aug. 1 signing deadline, but it’s helped college programs like Arkansas that the NCAA legalized Name, Image and Likeness (NIL) deals that enable players to make money while in school. You’re starting to see more high-profile guys, such as Peyton Stovall, pass on the pros out of high school and end up on campus.

“I’m good with it,” Van Horn said. “I want these guys to make some money, and I’d like them to make a lot of money and come to school and play for us and learn how to handle money and learn about taxes and pressure and people bothering them wanting to get a piece of this and a piece of that. I think it’s a great experience for them.”

As our three-part series totaling more than 4,000 words illustrates, there are still a lot of moving parts at play for the Diamond Hogs. Projecting what the final 2023 Arkansas baseball roster — much less the starting lineup and rotation — will look like would be a futile effort.

It’s also worth noting that the Razorbacks always have more players in the fall than they’re allowed to have during the actual season. The surplus enables them to have intrasquad scrimmages and gives them a large pool from which to pick the best players.

Some of the roster shaving could happen before the semester starts, but again, Arkansas is in a wait-and-see mode with the upcoming draft.

“If it gets crazy here in the next two or three weeks with guys not signing…then some conversations will take place,” Van Horn said. “But until that happens or it’s pretty obvious there’s not going to be great opportunity, we’re not going to do anything yet.”

As things currently stand, it appears the Razorbacks won’t have any shortage of talent when the season rolls around despite the massive roster turnover. Determining exactly who those players are, though, remains the biggest question mark.

“Fall ball will be fun this year,” Van Horn said. “I think there’s going to be a lot of competition, as it should be when you’re talking an SEC-type school — Arkansas, Kentucky, it doesn’t matter. You should have good players on campus, the ones that you want to go into the SEC games with and the ones that know how to battle and earn a spot.”

EDITOR’S NOTE: This is the final piece in a three-part series examining Arkansas’ 2023 baseball roster and the challenges Van Horn faces in putting it all together. The first two pieces are listed below. Part 1 looked at how the timing of the MLB Draft complicates things and how the Razorbacks have done in the portal so far. Part 2 looked at the players returning from last year’s team, both in the field and on the mound.