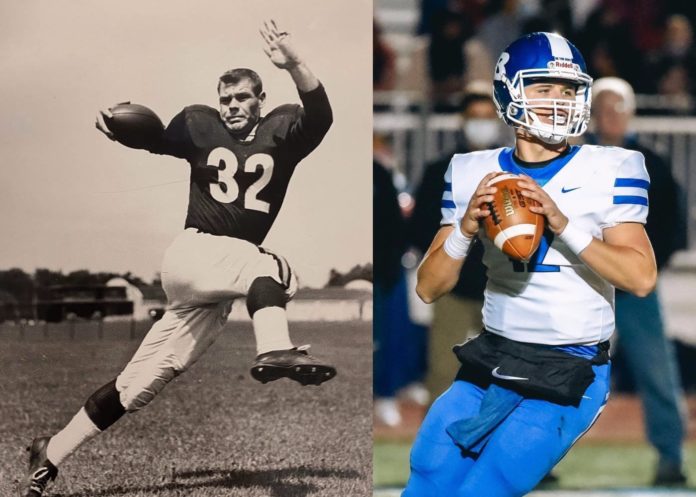 Saline County has a century-long history of gridiron tradition, most recently with the Bryant dynasty that has received national attention for the program’s accomplishments over the past half-decade. The first big-time player from the area, however, hailed from Bauxite, a town originally known for its aluminum production. That was George Cole, who would become a Razorback star and athletics director at the University of Arkansas.

Two decades later, in the 1940s, came the ultra-tough Leon “Muscles” Campbell, who coincidentally played college football at Arkansas at the time Cole was a coach. Though Bauxite has experienced plenty of success since that time, most notably winning a state championship in 1996, the likes of Campbell and Cole no longer come from the town. In the past 25 years, the tide of talent has shifted just a few miles west to Benton and north to Bryant.

Benton claimed its only state championship in 1977, but during the current regime under Brad Harris, the Panthers have made multiple deep runs in the playoffs, including an appearance in the 2019 state championship game that came down to the final play. Bryant, on the other hand, has set the standard for Arkansas high school football since 2018, winning the past four state titles and the past eight “Salt Bowl” rivalry games vs Benton including the 2022 edition. The Hornets are looking to win a state championship for the thumb in 2022.

This is the first edition of the Saline County all-time all-county team on Best of Arkansas Sports. A more expanded and complete version will be released at a later time.

Bryant head coach Buck James boldly summed up Ledbetter’s career in the postgame press conference after leading the Hornets to their third state title in a row, defeating North Little Rock 27-17 in 2020: “I will go on record as saying that he’s probably the greatest quarterback in the state of Arkansas history. His stats put him up there, the guy is nothing but a winner. He has done a heck of a job and somebody has missed out on one heck of a quarterback.” Some have argued that the 2020 Bryant team is the greatest ever assembled in the Natural State.

While there are plenty of names that could be debated for the title of greatest ever, most would agree that Ledbetter is hands down the best signal caller to come through Saline County. He took over as the starting quarterback against Conway his sophomore year and never looked back. He led the Hornets to a combined 26-0 record in 2019-20 and essentially rewrote the Bryant record books along the way. Some of Ledbetter’s records include most yards in a game (534), most yards in a career (6,957) and most yards in a season (3,322) – a record he holds both first and second place. He also owns the first and second spot for touchdowns in a season with 43 and 41, respectively, as well as in a career by a longshot with 88 total. Along with being tabbed All-State his junior and senior seasons, Ledbetter won the Landers Award and Arkansas Gatorade Player of the Year.

A two-sport star who also excelled on the diamond for the Hornets, Ledbetter received some Division II football offers and plenty of Division I interest, but ultimately decided to go the baseball route. He committed to Dave Van Horn and the Razorbacks his ninth-grade year and recently wrapped up his first season playing for the Diamond Hogs.

It is said that Campbell earned the nickname Muscles, which most knew him by without even knowing his real first name, after he displayed the strength to bend a railroad spike using a towel. He was well-depicted for that strength on the gridiron as a punishing runner and vicious tackler who was named All-State as a senior in 1945 while playing for George Henry. Campbell also starred in track, leading the Miners to two straight state titles.

After graduation, Campbell turned down multiple college football offers to go play at Arkansas from 1946-49, where fellow Bauxite alum George Cole was an assistant coach for the Razorbacks. Legendary Arkansas sports writers Orville Henry and Jim Bailey were quoted as saying, “Campbell was one of the great pure, instinctive football players of all-time. He combined a tackle’s strength with a tailback’s speed and linebacker’s agility.” Campbell’s 236-yard performance against North Texas in 1949 stood as a UA for almost a quarter century, until it was broken in 1973.

He was picked in the second round of the 1950 NFL Draft by the Baltimore Colts, but was slowed by injuries and forced to sit out in 1951. Campbell then spent three seasons with the Chicago Bears before finishing out his professional career with the Pittsburgh Steelers in 1955. He was forced to retire at 28 due to lingering knee injuries.

One of the more underrated receivers ever seen in Arkansas high school football – at least in a single season – Schrader was one of the driving forces behind Bryant’s dynasty from 2018-20 and is the school’s all-time leading receiver with 2,647 yards. He averaged more than 20 yards per catch in 2020. If it puts into perspective how great he truly was, North Little Rock set the game plan in the 2020 state championship to solely stop him by constantly making sure he was covered up at all times. The plan worked, but it allowed other players to heavily contribute, such as running back Tanner Anderson, who won the game’s Most Valuable Player while leading the Hornets to a 27-17 victory.

Schrader really took off in his senior season, leading the state in receiving yards (1,444) and touchdowns (20). His receiving yards also ranked within the Top 15 in the nation according to MaxPreps. One of Schrader’s most impressive stats were the four games in which he had 200-plus yards in 2020, all of which rank in the top five for most single-game receiving yards in school history. Included among them was a 266-yard performance in a regular-season contest with North Little Rock.

Surprisingly, Schrader was not heavily recruited despite immense production, but inked a Division I scholarship with the University of Central Arkansas on National Signing Day 2021.

Smith was known as a punishing linebacker during his career at Benton and took part in the All-Star game following a senior year in which he compiled 145 tackles, which also earned him All-State honors. His outstanding high school career earned him a scholarship from Frank Broyles and the Razorbacks, where he lettered three seasons. Described as a “razor-sharp linebacker” by legendary Arkansas Gazette sports writer Orville Henry, Smith was a starter in both his junior and senior seasons, contributing heavily on the 1964 Arkansas national championship football team. Smith was an honorable mention All-SWC player and was third on the all-time tackles list in school history when he left Fayetteville.

Simmons was not only exceptional on the football field, but also earned a stellar reputation in the classroom and in the Benton community during his high school career. As a three-year starter for the Panthers, Simmons was a unanimous All-State selection his senior season. He eclipsed 350 tackles during his career and is Benton’s all-time leading tackler. Benton head coach Brad Harris told 501 Life magazine in October 2021 that Simmons is “one of the hardest working players I have ever coached. His daily work ethic is as good off the field as it is on the field, regardless if it is in the weight room or conditioning.”

Before ever coaching for or leading the Razorbacks’ athletic department, Cole starred at quarterback, along with his brother Ed, for the first-ever Miners team assembled in 1920. Cole was also the first All-State football player in Bauxite history as a senior in 1923. That honor is particularly impressive because it came at the time when there were no classifications, so players from teams across the state (though there were not nearly as many) were considered.

After graduating from Bauxite, Cole accepted a scholarship offer from the University of Arkansas, where he also lettered in baseball. In 1927, Cole was selected to the All-Southwest Conference football team as a quarterback who also kicked after helping the Razorbacks to an 8-1 overall record and third-place finish in the SWC. Cole coached in some capacity for the Razorbacks’ football team from 1934-58, with a two-year break from 1943-44 to serve in World War II. He then spent the rest of his career in administrative roles, first as the assistant athletic director from 1957-70 and then as the athletic director, replacing John Barnhill, for three years until 1973. Arkansas’ baseball field is named in Cole’s honor and his other accolades include being inducted into the Arkansas Sports Hall of Fame in 1963 and the Collegiate Athletic Directors Hall of Fame in 1974.

Prior to his time in Saline County, James turned two struggling programs around, first at Star City where he eclipsed 36 games in four years, and then Camden Fairview winning his first state championship there in 2012. After a stint at Little Rock Christian as the offensive line coach and assistant athletic director, James took the Bryant job at the end of 2015 and needed just three years to win the first of his four straight (and counting) 7A state titles. That is a record for the larger classification schools in the modern playoff era.

James is, without question, the most established high school coach not only in the history of Saline County, but he’s also one of the most accomplished in the state. He currently sits at No. 5 among active coaches with 200 wins going into the 2022 season, trailing only Wynne’s Van Paschal, Rison’s Clay Totty, Warren’s Bo Hembree and Prairie Grove’s Danny Abshier.

However, things could have gone differently if Gus Malzahn had decided to leave Northwest Arkansas 23 years ago. Then an up-and-comer at Shiloh Christian in Springdale, Malzahn accepted the Benton job on Feb. 5, 1999, only to retract 12 days later, saying that God told him to stay at Shiloh Christian. “I feel the Lord is calling my family to remain at Shiloh,” Malzahn told the Saline Courier in a statement released by his wife, Kristi. “I apologize to the people of Benton. In no way is this decision a negative reflection upon the people, players, or administration. This was strictly a personal decision.”

Hill is a native of Saline County, as he attended Bryant before transferring to North Little Rock for his junior and senior seasons. He was highly recruited as the top-ranked player in Arkansas and No. 153 overall prospect in the country, according to the 247Sports Composite. Hill initially committed to Arkansas prior to his senior year, announcing the decision at the Arkansas Sports Hall of Fame in late August 2014, but then decommitted the following January, just weeks before National Signing Day. He ultimately ended up signing with Ohio State, where he would become the program’s all-time leader in receptions, as well as tied for consecutive games with a reception (48). Hill was drafted by the Los Angeles Chargers in 2020 and waived by the team in October 2021.

See more from this series with our Faulkner Co. all-time, all-county team:

Subscribe to our email newsletter so you are always notified when we release new or extended editions of the all-time, all-county teams: