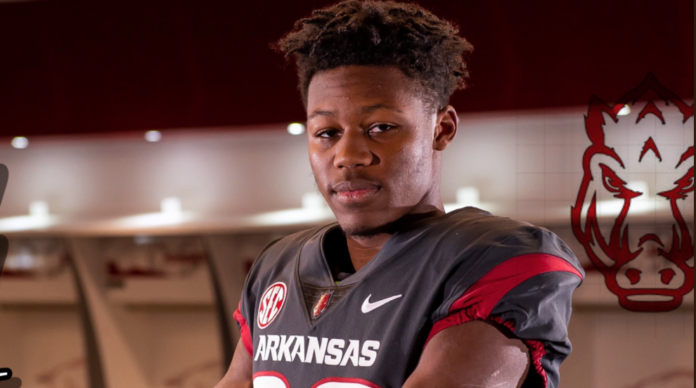 In 2019, the Hogs signed the top rated wide receiving group with Treylon Burks, Trey Knox, Shamar Nash and TQ Jackson – all rated as one of the Top 50 receivers in the nation for their class.

A year from now, expect that position to be even more stacked.

Ze’Vian Capers, a 6-4 and 205 pound receiver out of Alpharetta, Georgia, today became the first Razorback commit from the class of 2020. Capers is just outside the Top 50 receivers for his class, chiming in at No. 53 according to ESPN. That’s probably because he runs a 4.64 in the 40 yard dash, something speed training in college will address.

But just because he isn’t a burner in front of the stopwatch doesn’t mean he can’t play. An exceptionally coordinated athlete who also plays basketball, “Capers showed tantalizing hands and athleticism in his first two years of high school competition at South Forsyth before joining the first-year Danes program this past fall, where he thrived in Denmark’s spread passing attack,” one of his hometown sportswriters wrote. “Capers had 60 catches for 1,182 receiving yards and 11 touchdowns and often made spectacular plays for big yardage, including an 81-yard score against White County that shifted that game’s tide towards an eventual Danes win.”

Here are some Ze’Vian Capers highlights:

Ze’Vian Capers chose Arkansas over the likes of Clemson, South Carolina, Florida, Georgia Tech and Louisville. Besides his close relationship to Arkansas wide receiver coach Justin Stepp, he has plenty other Hog connections.

For starters, his head coach at Denmark High School is a Fort Smith native and a 1988 graduate of the University of Arkansas. On top of that, the Danes’ defensive line coach Patrick Jones played on the defensive line for the Hogs. (I also wish the literal Dane Hjalte Froholdt had some kind of connection to this school, but alas, that isn’t the case.)

One of the top 2021 quarterbacks in the nation, Aaron McLaughlin, also plays for Denmark High School. McLaughlin attended a football camp in 2018 in Fayetteville and is a key 2021 target for the Hogs.

It will be interesting to see what influence all these Razorback connections has on McLaughlin. We’ll be monitoring that in the next couple years here on BestOfArkansasSports.com.

Make sure to read more about Chad Morris’ ambitions for the Hogs Class of 2020 below: