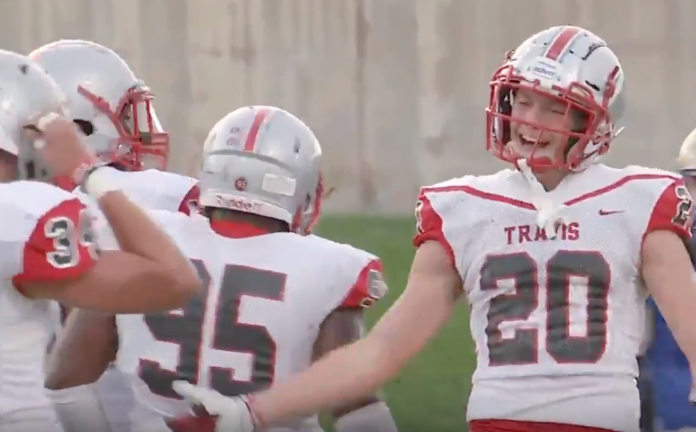 For the first part of John Chavis’ illustrious career, the Razorback defensive coordinator was known for coaching linebackers. In fact, it was as a linebacker and defensive line assistant that he got his start coaching in major college football under Johnny Majors, the former Razorback assistant who became Tennessee’s head coach.

The proof’s in the pudding.

He also coached two NFL first-rounders at that position — Al Wilson and Jerod Mayo (the 2008 NFL Defensive Rookie of the Year).

So, when the man opines on the upside of young linebackers, he knows what he’s talking about. And John Chavis sees tremendous upside in 2019 Razorback signee Zach Zimos. Zimos, a four-star outside linebacker according to Rivals.com, made 188 total tackles for Travis High School in the Houston metro area. “He has really good speed and body control,” Chavis said. “When it’s time to gather himself up and make a play, he can do that.”

“He’s got a long body and that long body is something we’ve certainly missed on the edge in terms of packages where we’re blitzing our weak side linebacker,” Chavis said via Twitter.

“I think he’ll be another guy who will add to our pass rush. We need that very desperately.”

“He has that intensity and he plays with relentless effort. And that’s what you got to have if you’re gonna be a great player.

You can be a good player and not have that, but to be a great player you got to strain your body … It’s not easy, and that’s why some people get separated from the game, because they can’t do it.”

“And he does it naturally.”

You can see some of that relentless effort in the highlight clip in the Tweet above. Check out the below video, too. The closing speed Zimos shows at the :07 mark is especially impressive:

Zimos chose the Hogs over the likes of Missouri, SMU, Boise State and Houston. You may be wondering why hes wasn’t ranked higher — and why more teams didn’t offer him — if he’s the beast-the-making that John Chavis describes. One reason is that Zimos only switched from safety to linebacker in his junior season, as Rivals recruiting analyst Nick Krueger explains at the :22 mark below:

Notably, Krueger mentions that Zimos, at this age, is athletically ahead of the game compared to any of the linebackers Chavis recruited while serving as the defensive coordinator of Texas A&M.

-Rated as the No. 22 outside linebacker in the country and 39th overall player in the state by Rivals

As a senior: Made 98 total tackles, 80 unassisted, with six tackles for loss … Posted three quarterback hurries, two passes defended and two fumble recoveries, while also blocking a punt for the Tigers … Helped Fort Bend Travis HS to an 8-3 mark and a first round appearance in the 2018 Texas High School Football State 6A-I playoffs

As a junior: Recorded 56 total tackles, 47 unassisted, with five for loss, including a sack.. Had a team-high two interceptions, with two fumble recoveries and one forced fumble in 2017 … Completed his high school career with 188 total tackles, averaging 6.3 per game, with 156 solo tackles and seven interceptions as a Tiger …

UPDATE: Now that highly recruited JUCO LB Lakia Henry has decided to play for Ole Miss, expect Zach Zimos’ role on the 2019 team to increase. Fortunately, he has De’Jon Harris, the SEC’s leading tackler, as a mentor at the position.

He will likely need to add 15-20 pounds of muscle to be effective as a freshman, but that’s what team nutritionists get paid the big bucks for.